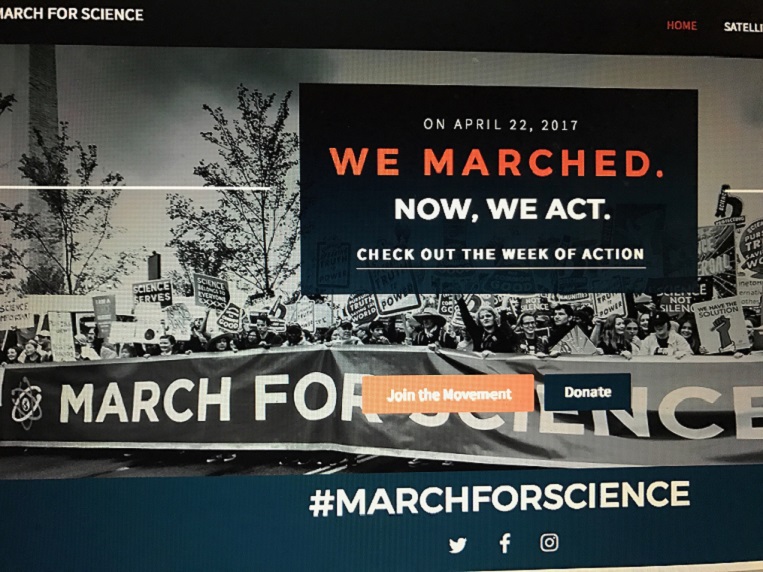 Did you know that the March For Science was a result of a Reddit discussion about Women’s March in Jan., 2017, then a Facebook Group began, starting from 200 members and grew to 300,000 within a week. The organizers maintain that the march is a non-partisan movement that celebrates science and its role in our every day life, benefiting every one and encourages evidence based policy for public’s best interest. If the growing anti-science trend continues, it would pose a threat to America’s future.

At the urging of some of our readers/viewers, I am posting this event a bit later than I’d liked to.  On April 22, 2017 (the Earth Day), in more than 600 cities around the world, people marched as an unprecedented coalition of organizations and individuals. They marched because science is critical to our health, economics, food security, and safety. They marched to defend the role of science in policy and society. In the coming weeks, let’s continue to work with marchers, partner organizations, and satellite march organizers around the world as we plan the future of the March for Science movement.

As Bill Nye, the Science Guy (now Bill Nye Saves The World), spoke, “as indicated in our Constitution,  Article I, Section VIII,which refers to promoting the progress of  science and useful arts. Its intent is to motivate the innovators and to drive the economy by means of just laws. They knew that without the progress of science and useful arts of engineering, our economy would falter. Without science and literate citizens, United States or any country cannot compete on the world stage. But now we have law makers around the world who are deliberately ignoring and actively suppressing science. Their inclination is misguided and is in no one’s interest. Our lives are in every way improved by having clean water, reliable electricity, and access to electronic global information….science is for all….science serves every one of us….science must shape policy….science is universal…. science brings out the best in us….with an informed optimistic view of the future, we can SAVE  THE WORLD .  ”   Any comments, suggestions, concerns regarding this post will be welcomed at [email protected]
Gathered, written, and posted by Windermere Sun-Susan Sun Nunamaker
More about the community at www.WindermereSun.com