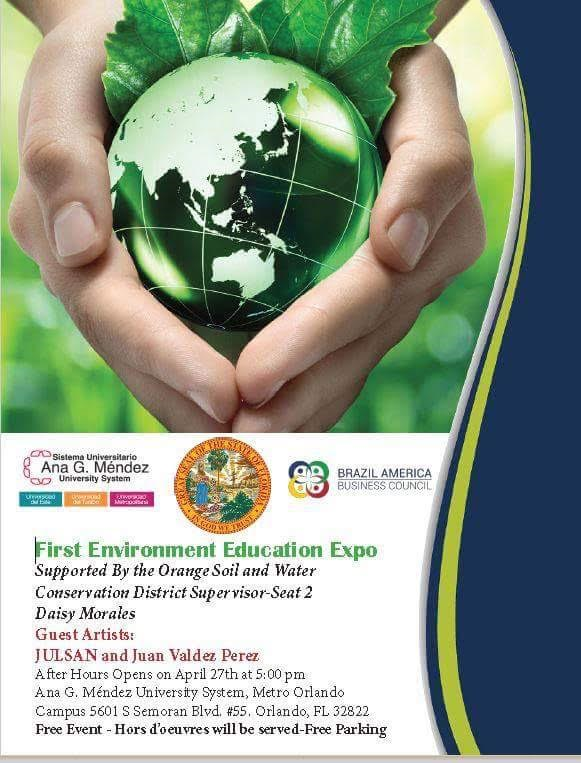 This is a FREE event, Hors d’oeuvres will be served, free parking.

The Orange Soil and Water Conservation District (OSWCD) is a subdivision of the Florida Department of Agriculture and Consumers Services (FDACS). OSWCD was created in 1946 under Chapter 582, Florida Statutes to develop and carry out various conservation and education programs. Throughout the State of Florida, individual Soil and Water Conservation Districts act as a liaison between government agencies, private organizations and the public at large in carrying out their mission.

The OSWCD board consists of 5 elected non-partisan supervisors who are non-salaried  public officials. The OSWCD is not funded by any tax dollars and currently relies solely on donations for financial support

It is integrated by:

Ana G. Méndez was one of eight children born to Francisco González Monje and Ana González Cofresí in Aguada, Puerto Rico. She was a direct descendant of the Puerto Rican pirate Roberto Cofresí, on her mother’s side.

In 1935, Méndez graduated from high school in Santurce; she earned her bachelor’s degree in commercial education from the University of Puerto Rico in 1940. It was during the 1940’s that she realized that students should have the option of having a short term college for a commercial or technical career – this led in 1941, to her founding the Puerto Rican High School of Commerce with 3 teachers and nine students.  In 1948, Méndez graduated from New York University with a master’s degree. In 1948, she founded the Puerto Rico Junior College in Rio Piedras with 19 students; this became the first educational institution in Puerto Rico to offer an associate degree (2 year college). An educational visionary, Méndez founded universities, television stations, college classes by mail and as mentioned above the associate degree.

Among the universities founded by Mendez are:

In 1965, Méndez became the “first” and only Puerto Rican woman amongst the Board of Directors of Eastern Air Lines. In 1975, the Catholic University of Puerto Rico awarded to Méndez an Honorary Doctorate Degree in Humanities. Ana G. Méndez died on 18 February 1997 in San Juan, Puerto Rico. Puerto Rico honored her memory by naming an avenue in San Juan after her. On 10 July 2003, Mayor Buddy Dyer of Orlando, Florida announced the opening of the “Ana G. Mendez Metro Orlando University”