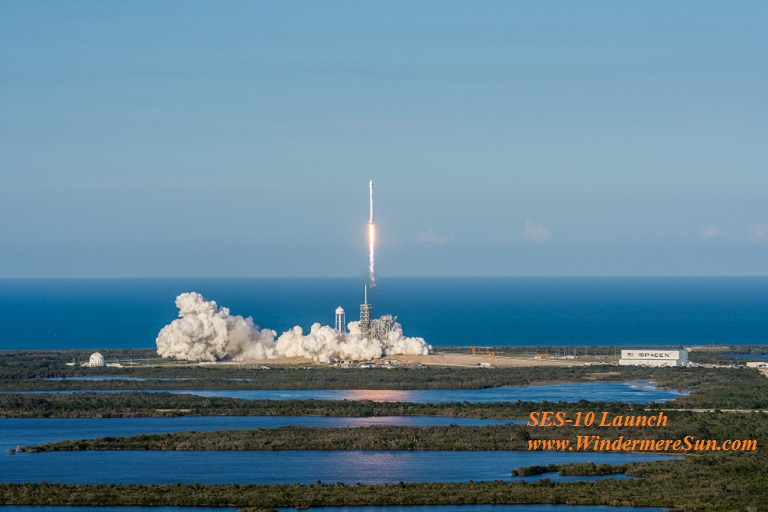 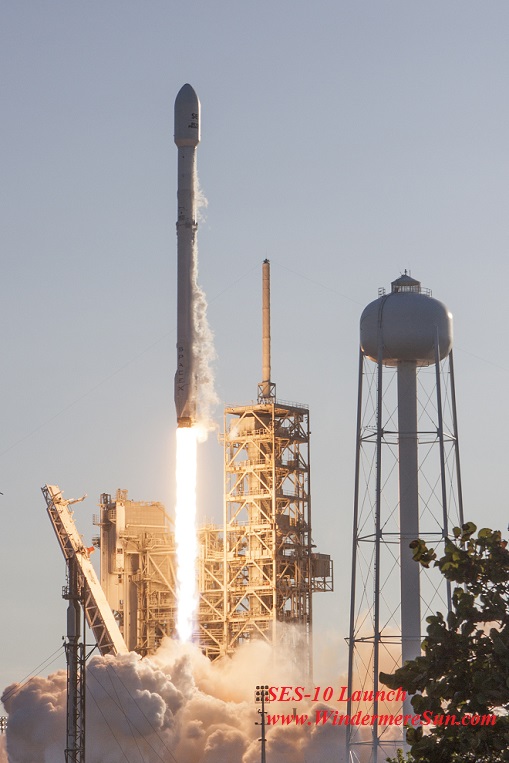 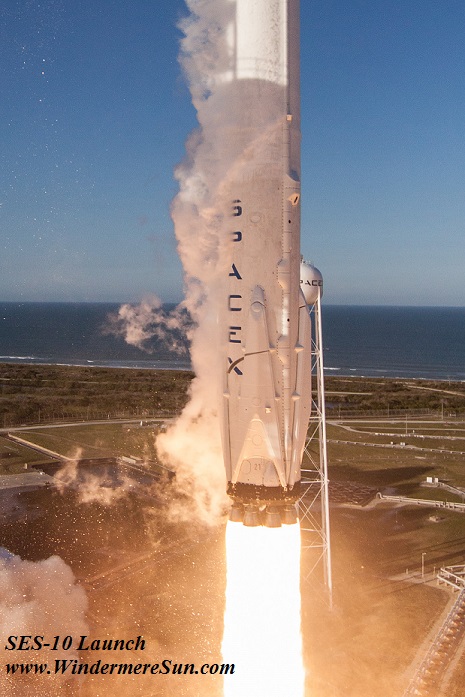 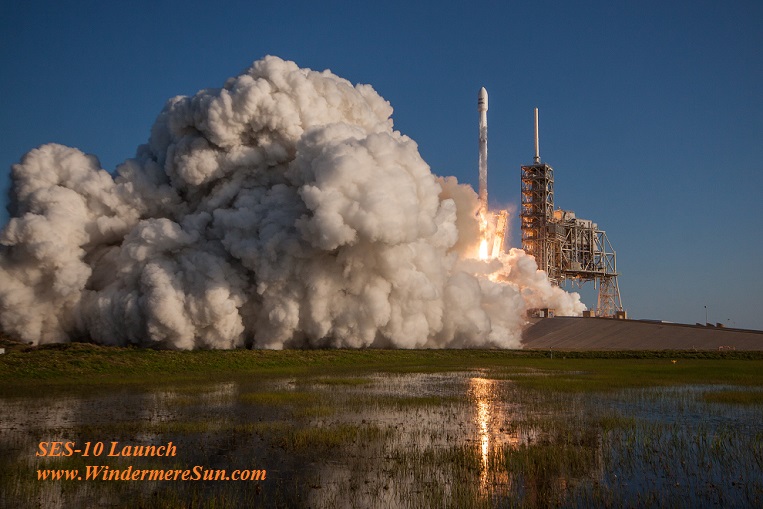 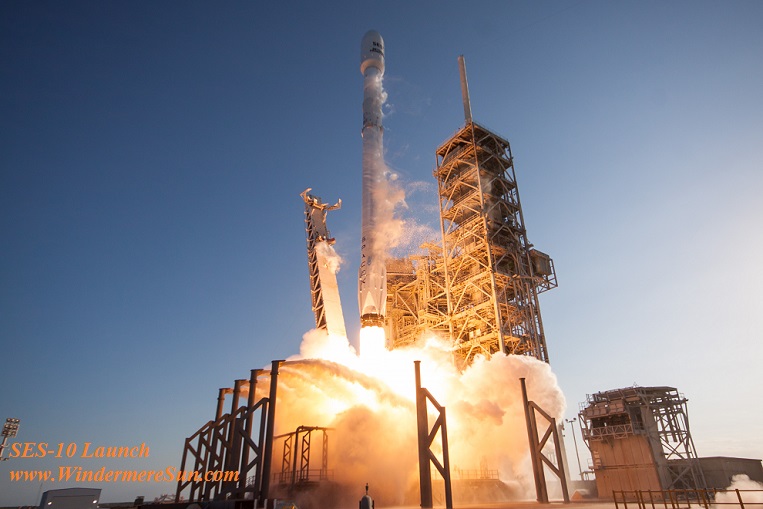 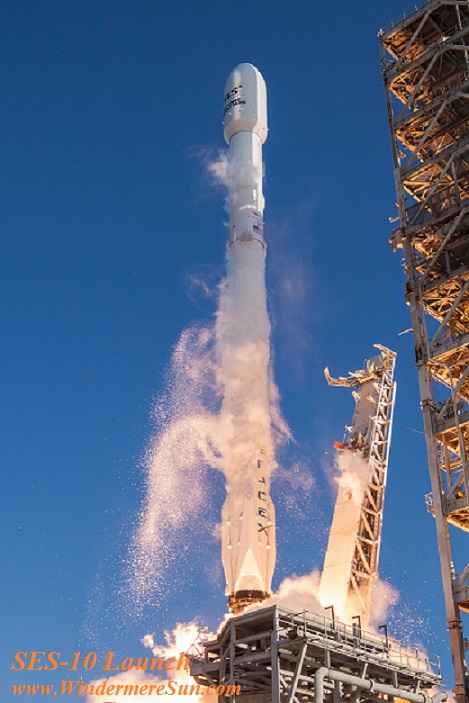 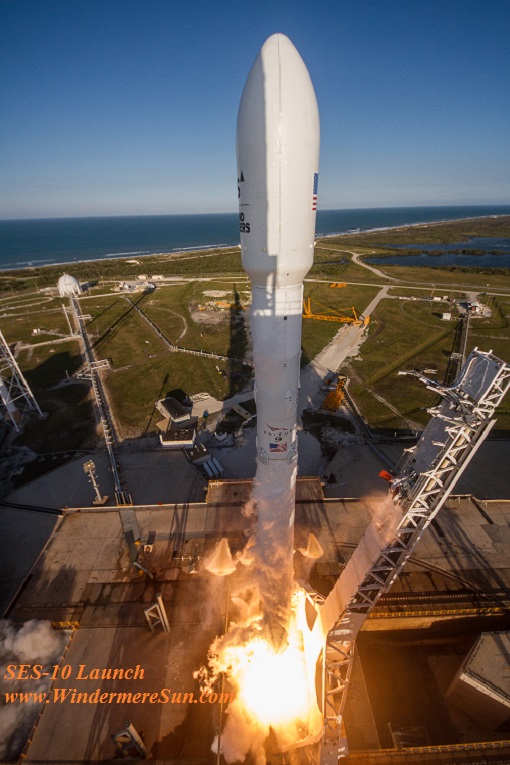 Of course, I simply have to embellish upon the news that is in accord with the goal and spirit of Windermere Sun, to promote activities, businesses, and collaborations for healthy, happy (and uplifting), and sustainable living!  As I’ve promised from the previous post, here is more  information on Space X’s SES-10 Mission that was launched yesterday, March 30, 2017. 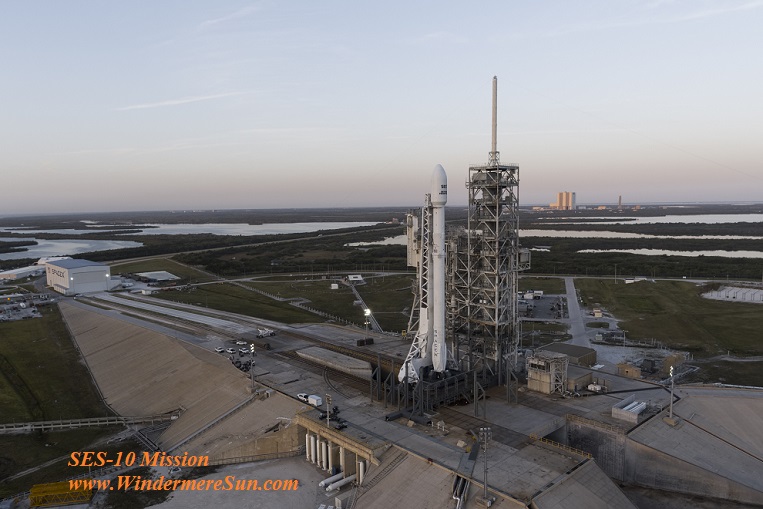 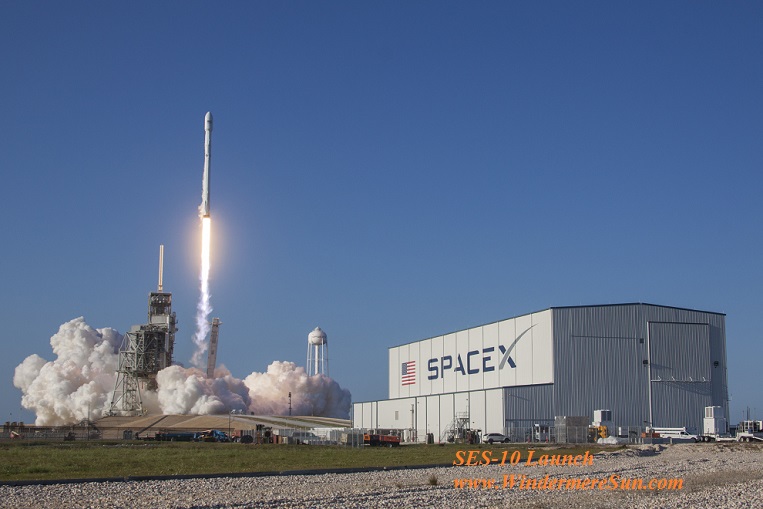 Space X’s Falcon 9 will deliver SES-10, a commercial communication satellite for SES, to Geostationary Transfer Orbit (GTO). SES is a world-leading satellite operator, providing reliable and secure satellite communications solutions across the globe. The SES-10 mission marks a historic milestone on the road to full and rapid reusability as the world’s first reflight of an orbital class rocket. Falcon 9’s first stage for the SES-10 mission previously supported the successful CRS-8 mission in April, 2016.

Following stage separation, Falcon 9’s first stage landed on the “Of Course I Still Love You” droneship that will be stationed in the Atlantic Ocean.

SES-10 is SES’s first satellite designed exclusively to serve the thriving markets of Latin America. With 55 Ku-band transponder equivalents, SES-10 will be one of the biggest satellites covering Latin America and will provide significant capacity expansion to support SES’s reach in the region.

To be positioned at 67 degrees West, SES-10, pursuant to an agreement with the Andean Community (Bolivia, Colombia, Ecuador, and Peru), will be used for the Simon Bolivar 2 satellite network. It will replace the capacity currently provided by two SES satellites at that locatioin, and bring additional high-powered capacity across Latin America ranging from the Gulf of California in Mexico to Cape Horn in Chile. Due to its ability to provide interconnection among the beams, the satellite will offer substantial flexibility to best respond to the markets’ needs.

For those of you interested in the background of Launch Facility, information (in italics), below:

Launch Complex 39A at Kennedy Space Center, Florida Launch Complex 39A (LC-39A) at NASA’s Kennedy Space Center has a long and storied history dating back to the early 1960s. Originally built to support the Apollo program, LC-39A supported the first Saturn V launch (Apollo 4), and many subsequent Apollo missions, including Apollo 11 in July 1969. Beginning in the late 1970s, LC-39A was modified to support Space Shuttle launches, hosting the first and last shuttle missions to orbit in 1981 and 2011 respectively.

In 2014, SpaceX signed a 20-year lease with NASA for the use of historic Launch Complex 39A. Since then, the company has made significant upgrades to modernize the pad’s structures and ground systems, while also preserving its important heritage. Extensive modifications to LC-39A have been made to support launches of both commercial and crew missions on SpaceX’s Falcon 9 and Falcon Heavy launch vehicles.