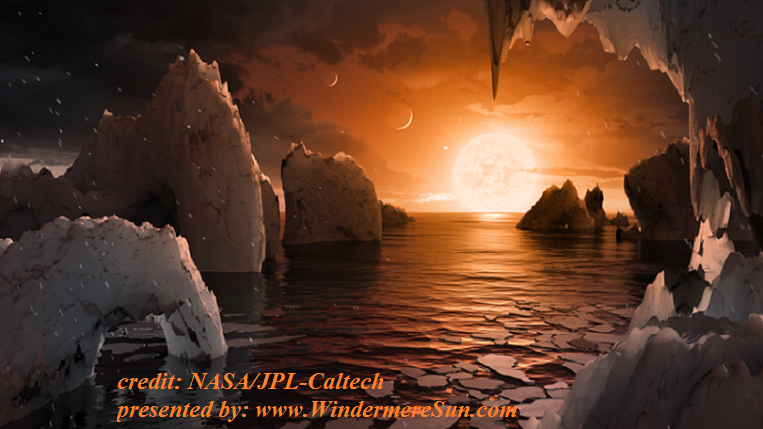 Possible Surface of Trappist-1f using Spitzer Space Telescope and ground based telescopes have discovered that there are seven Earth-size planets in the system (credit: NASA/JPL-Caltech) 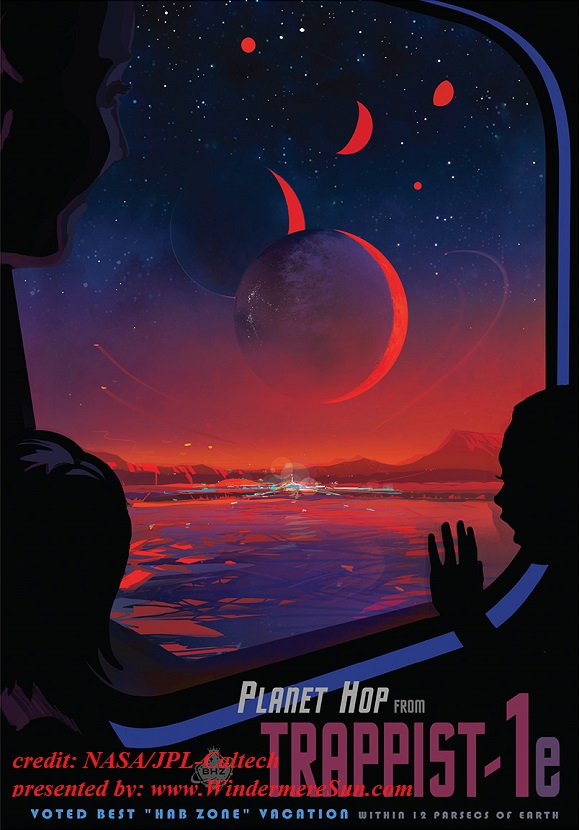 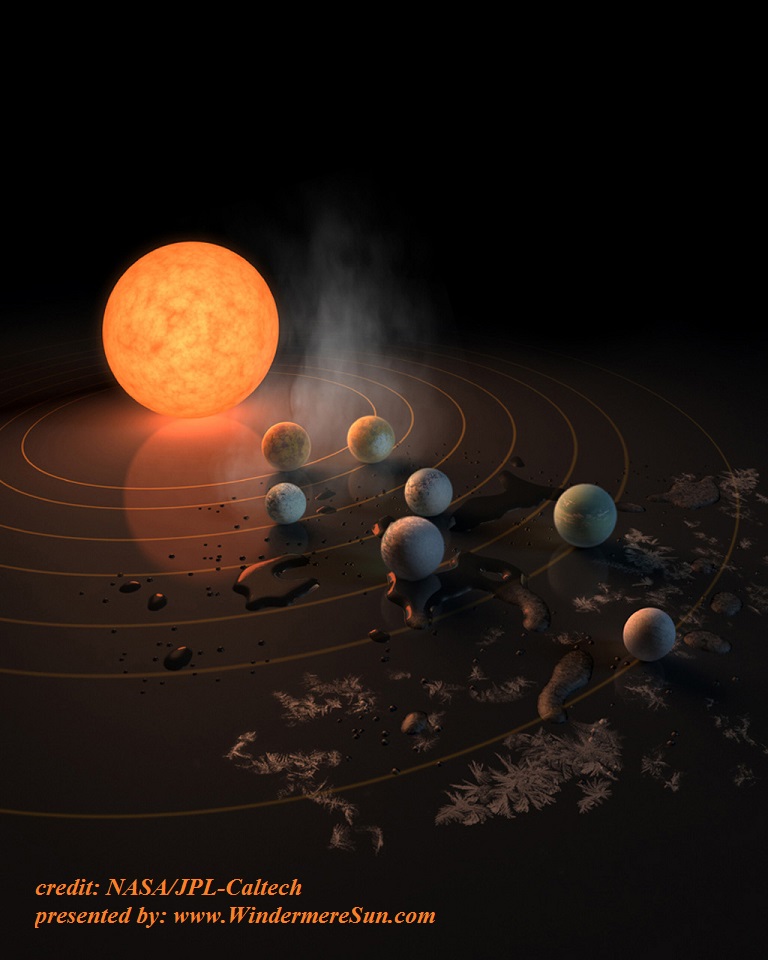 The Trappiste-a star an ultra cool dwarf has seven Earth size planets orbiting it. This is an artists’ concept appeared on the cover of the journal Nature on Feb. 23, 2017 (credit: NASA/JPL-Caltech) 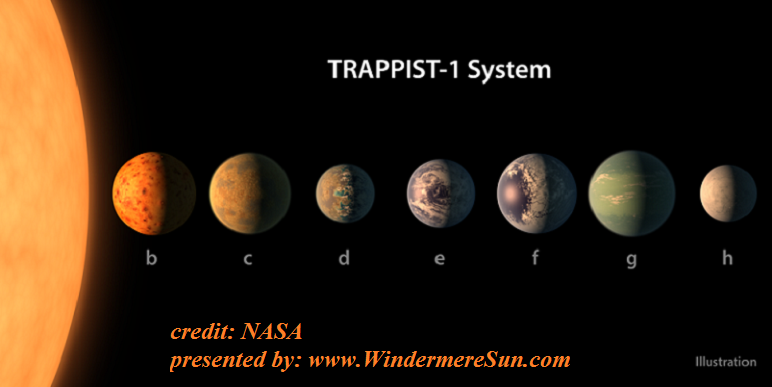 Trappiste 5 lineup. Artists’ concept shows what each of the Trappis-1 planets may look like based on available data about their sizes, masses, and orbital distances (credit: NASA) 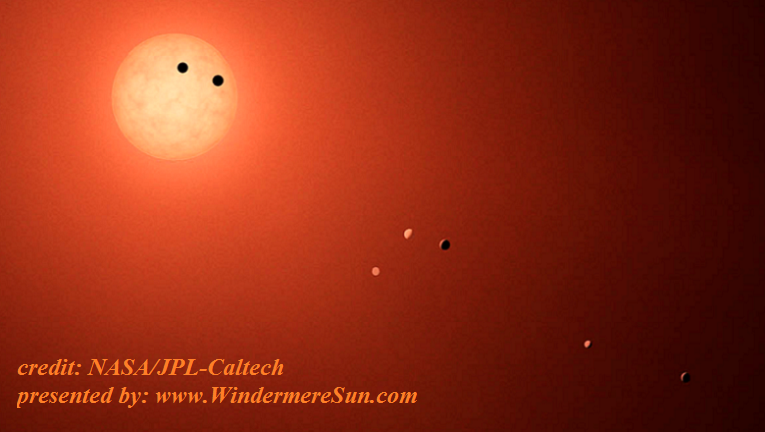 The seven planets orbiting Trappist-1 and ultra cool dwarf star as they might look as viewed from Earth using a incredibly powerful telescope (credit: NASA/JPL-Caltech)


Something quite exciting happened this month, on 22 February 2017, astronomers announced four additional exoplanets around TRAPPIST-1. This work used the NASA Spitzer Space Telescope and the Very Large Telescope at Paranal, among others, and brought the total number of planets to seven, of which three are considered to be within its habitable zone; conceivably, the others also could be habitable so far as they may possess liquid water somewhere on their surface.  If any of the habitable zone planets have an atmosphere similar to that of the Earth, they are expected to possess oceans. However, this is unlikely as the extreme ultraviolet and x-ray radiation of the host star is much greater than that of the Sun and is high enough to have likely to have stripped these planets dry in a very short time.

The seven planets orbiting Trappist-1 and ultra cool dwarf star as they might look as viewed from Earth using a incredibly powerful telescope (credit: NASA/JPL-Caltech)

Possible Surface of Trappist-1f using Spitzer Space Telescope and ground based telescopes have discovered that there are seven Earth-size planets in the system (credit: NASA/JPL-Caltech)

TRAPPIST-1, also designated as 2MASS J23062928-0502285, is an ultra-cool dwarf star, slightly larger than the planet Jupiter, located 39.5 ly (12.1 pc; 3.74×1014 km; 2.32×1014 mi), from the Sun in the constellation Aquarius. As of February 2017, the dwarf star has been shown to host seven terrestrial planets, a larger number than detected in any other planetary system.  Astronomers first discovered three Earth-sized planets orbiting the dwarf star in 2015. A team led by Michaël Gillon at the University of Liège in Belgium detected the planets using transit photometry with the Transiting Planets and Planetesimals Small Telescope (TRAPPIST) at the La Silla Observatory in Chile.

TRAPPIST-1 is an ultra-cool dwarf star, of spectral class M8.0 ± 0.5, that is approximately 8% the mass of and 11% the radius of the Sun and, although slightly larger than Jupiter, about 84 times more massive. It has a temperature of 2550 K and is at least 500 million years old (beyond this minimum, indicating the star is past its youthful active phase, the age is poorly constrained due to the very slow evolution of this class of stars). In comparison, the Sun is about 4.6 billion years old and has a temperature of 5778 K.

In February 2017, astronomers announced that the planetary system of this star is composed of seven temperate terrestrial planets, of which five (b, c, e, f and g) are similar in size to Earth, and two (d and h) are intermediate in size between Mars (which has a diameter about half that of Earth) and Earth. Three (e, f and g) orbit in the habitable zone.The total mass of the six inner planets is about 0.02% the mass of TRAPPIST-1, a fraction similar to that for the Galilean satellites of Jupiter, suggesting perhaps a similar formation history.

Trappiste 5 lineup. Artists’ concept shows what each of the Trappis-1 planets may look like based on available data about their sizes, masses, and orbital distances (credit: NASA)

TRAPPIST-1 planetary system compared with the Sun, Jupiter and other related solar system bodies.
Any comments, suggestions, concerns regarding this post will be welcomed at info.WindermereSun@gmail.com
Photographed, written, and posted by Windermere Sun-Susan Sun Nunamaker
More about the community at www.WindermereSun.com