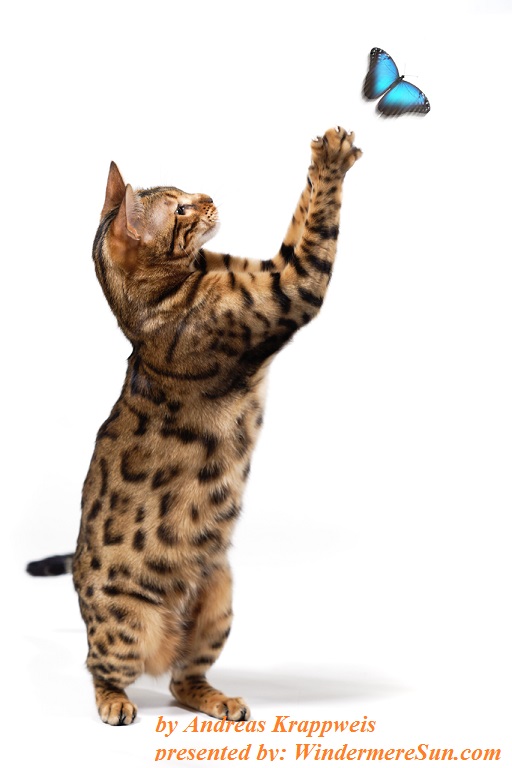 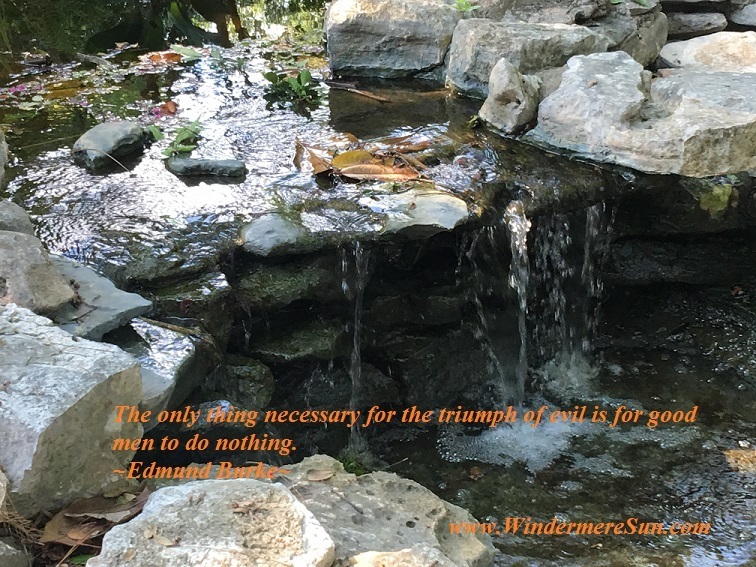 The only thing necessary for the triumph of evil is for good men to do nothing.(quote by Edmund Burke). (I believe he meant good men and women, commented and photographed by Windermere Sun-Susan Sun Nunamaker)

Have you ever seen a cat having caught the butterfly?

The Bengal is a domestic cat breed developed to look like exotic jungle cats such as leopards, ocelots, margays and clouded leopards. Bengal cats were developed by the selective breeding of domestic cats crossed then backcrossed and backcrossed once more with hybrids from the Asian leopard cat (ALC), Prionailurus bengalensis bengalensis, and domestic cat, with the goal of creating a confident, healthy, and friendly cat with a highly contrasted and vividly marked coat.

The name “Bengal cat” was derived from the taxonomic name of the Asian leopard cat (P. b. bengalensis). They have a “wild” appearance with large spots/rosettes/arrowheads, and a light/white belly, and a body structure reminiscent of the ALC. Once separated by at least four generations from the original ALC × domestic cat crossing, the breed possesses a gentle domestic cat temperament. Bengal cats are generally a bright orange to light brown color, although pale or off-white “snow” Bengals also exist, and are popular among owners.

After three generations from the original crossing, the breed usually acquires a gentle domestic cat temperament; however, for the typical pet owner, a Bengal cat kept as a pet should be at least four generations (F4) removed from the leopard cat. The so-called foundation cats from the first three filial generations of breeding (F1–F3) are usually reserved for breeding purposes or the specialty pet home environment. Bengals are known for liking water, and require a large amount of attention to keep them happy. Bengals also enjoy playing, and have been recorded jumping over 4 feet from the ground.

The only thing necessary for the triumph of evil is for good men to do nothing.(quote by Edmund Burke). (I believe he meant good men and women, commented and photographed by Windermere Sun-Susan Sun Nunamaker)

Throughout history, we have observed such a phenomenon: The only thing necessary for the triumph of evil is for good men/women to do nothing….spoken by Edmund Burke

Edmund Burke ( 1729 – 1797) was an Irish statesman born in Dublin, as well as an author, orator, political theorist, and philosopher who, after moving to London, served as a member of parliament (MP) for many years in the House of Commons with the Whig Party.

Burke is remembered mainly for his support of the cause of the American Revolutionaries, Catholic emancipation, the impeachment of Warren Hastings from the East India Company, and for his later opposition to the French Revolution, the latter leading to his becoming the leading figure within the conservative faction of the Whig Party, which he dubbed the “Old Whigs”, as opposed to the pro–French Revolution “New Whigs”, led by Charles James Fox.

In the nineteenth century Burke was praised by both conservatives and liberals. Subsequently, in the twentieth century, he became widely regarded as the philosophical founder of modern conservatism.

Photographed, written, and posted by Windermere Sun-Susan Sun Nunamaker
More about the community at www.WindermereSun.com
We Need Fair Value of Solar