Immigration Ban from 7 Muslim based countries 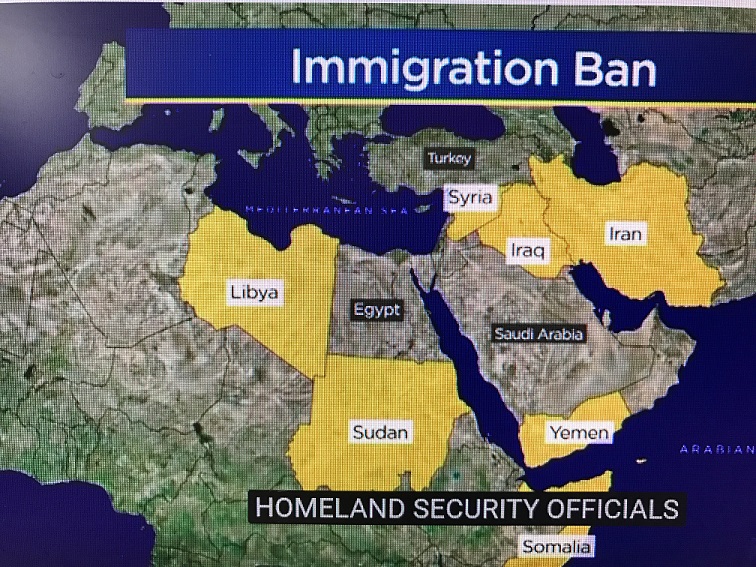 Immigration Ban from 7 Muslim based countries


Bill O’Reilly Challenges Trump On Muslim Ban, below:
Within twenty-four hours after President Trump has enacted his executive order in temporary (90 days) banning of refugees and immigrants (or any one with an approved refugee application) from the seven predominantly Muslim countries (Iran, Iraq, Libya, Somalia, Sudan, Syria, and Yemen), two Iraqi men landed and were detained at JFK airport. ACLU and several other activist groups then filed a federal law suit in the Eastern District court in Brooklyn, NY., suing President Trump and the federal government for unconstitutionally detaining these two Iraqi men. The ACLU believes the order also applies to 100-200 people currently at airports across the country. The judge set a court date for later in February to discuss this case.
President Trump’s Executive Order


Refugees allowed into the U.S. will be reduced from 110,000 (allowed during Obama administration) to 50,000 annually. U.S. will prioritize non-Muslim persecuted minorities.

The supposed intention of this executive order is to protect U.S. citizens from terrorists. But all the terrorists or hijackers from 9/11 event came from countries such as Saudi Arabia, Lebanon, United Arab Emirates. None of these nations are included in the banned list.

The first one of the two Iraqi men, 53 year old Hameed Khalid Darweesh, a husband and father of three, had been released from the JFK airport earlier Saturday. Darweesh had been working on behalf of the U.S. government/military in Iraq for ten years as translator and engineer. The second detainee, 33 year old Haider Sameer Abdulkhaleq Alshawi, was coming to U.S. to join his wife, who had worked for a U.S. contractor, and young son. Alshawi has also been released on Saturday later in the evening.

More will be reported later in February on this topic. Separation of Powers and Checks and Balances of USA are truly being put to the test.