Florida Getting Ready For The Congressional Election 2016

Recently I’ve received some message (from reader/viewer B) inquiring information about the Florida Congressional election. Even though I’ve promised our readers/viewers to never post any articles that would involve bias toward any religious or political group, I believe our current election and campaign season warrants some unbiased presentations to keep our readers/viewers informed.

Florida is divided into 27 congressional districts, each represented by a member of the United States House of Representatives. After the 2010 Census, the number of Florida’s seats was increased from 25 to 27 due to the State’s increase in population, and subsequent reapportionment in 2012. The districts are represented in the 114th United States Congress by 10 Democrats and 17 Republicans. In 2010 more than 63 percent of Florida voters approved the initiated Amendments 5 and 6, known as the “Fair District Amendments,” to the state constitution, over the objections of the Republican-controlled legislature. These are intended to promote fairness in congressional districts and “prohibit lawmakers from intentionally drawing districts that favor incumbents or political parties.”The legislature had adopted new districts in 2012 as a result of the 2010 census. Their product was soon challenged in early 2011 by groups who had worked for passage of the amendments, including the League of Women Voters and Common Cause. The trial revealed much secret dealings by party operatives and lawmakers; the court set a new legal standard. At one point the court excluded the press and shut down the TV feed in order to allow three hours of testimony by a political operative. On July 9, 2014, a Florida judge ruled that state Republicans had illegally drawn the state’s congressional districts. Judge Terry P. Lewis of Florida’s Second Judicial Circuit ordered that the 5th and 10th districts be redrawn. On appeal, the Florida Supreme Court ruled on July 9, 2015 that several more districts had to be redrawn, and that the legislature had unconstitutionally worked to benefit the Republican Party. The historic ruling was considered likely to affect most of the state’s 27 districts. On December 2, 2015 the state supreme court approved a remedial plan for districting for the 2016 elections. All but Districts 1, 8, and 19 were altered in some way by the plan. The most dramatic changes were made to the 5th and 10th Congressional Districts. The new 5th and 10th are each composed of less than 40% of their old seats. 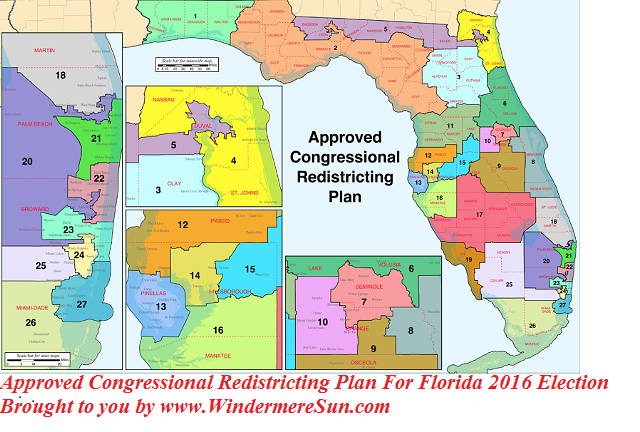 To better understand some of the issues that Floridians are concerned with during this Congressional election season, allow me to share these videos below. Please do keep in mind that speakers in these videos do not necessarily reflect views of Windermere Sun. Windermere Sun is simply trying to present issues of concern of Floridians, from various parties.

Below is a video of live forum of Florida Congresional Districts 7, 9, and 10, hosted by AARP in partnership with the League of Women Voters of Florida, FOX 35, and Orlando Sentinel . It is a very clear and concise presentation of various Congressional candidates (of these three districts), responding to questions concerning issues such as: finance, social security, climate change, minimum wage, shrinking middle class, investing in education and infrastructure, campaign finance reform, and environment, etc.


Below is a video of U.S. Congressional District 18 Democrat candidates talk about Florida job creation:

Florida Congressional District 2 candidates are given opportunity to cross-examine the other candidates, below:


Florida Congressional District 1 Congressional Debate Part 1, below: Please do keep in mind that ObamaCare has mandated insurance companies to cover pre-existing conditions. Under ObamaCare, there cannot be recission (meaning: you cannot be dropped from the policy after you become sick). (In contract law, recission has been defined as the unmaking of a contract between parties. Rescission is the unwinding of a transaction. This is done to bring the parties, as far as possible, back to the position in which they were before they entered into a contract (the status quo ante).

To help clarify one of the issues mentioned in the video above, there are multiple source links, below, on U.S. Military Spending vs. Other Countries (U.S. outpaces all other nations in military spendings. World military spendings totaled more than $1.6 trillion in 2015, with U.S. accounting for 37% of the total. The military expenditures of U.S. are about the size of the next seven largest military budgets around the world combined, China+Saudi Arabia+Russia+UK+India+France+Japan) .

The 2016 U.S. House of Representatives elections in Florida will take place on November 8, 2016. Voters will elect 27 candidates to serve in the U.S. House, one from each of the state’s 27 congressional districts. Heading toward the November 8 election, the Republican Party holds 17 of the 27 congressional seats from Florida, as of August 2016.

I did not post the names of those candidates who have withdrawn from the race and only listed those who are currently still in the running above. I implore you to find out more about the position of these candidates in your Congressional District.

One of the possible sources for you to find out more about nonpartisan fact-based voter information is at bereadytovote.org .