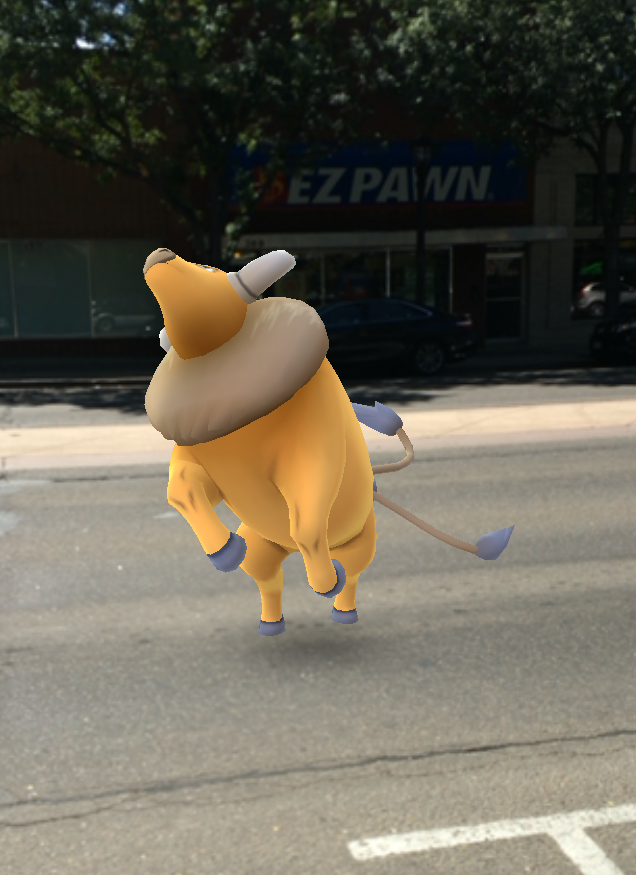 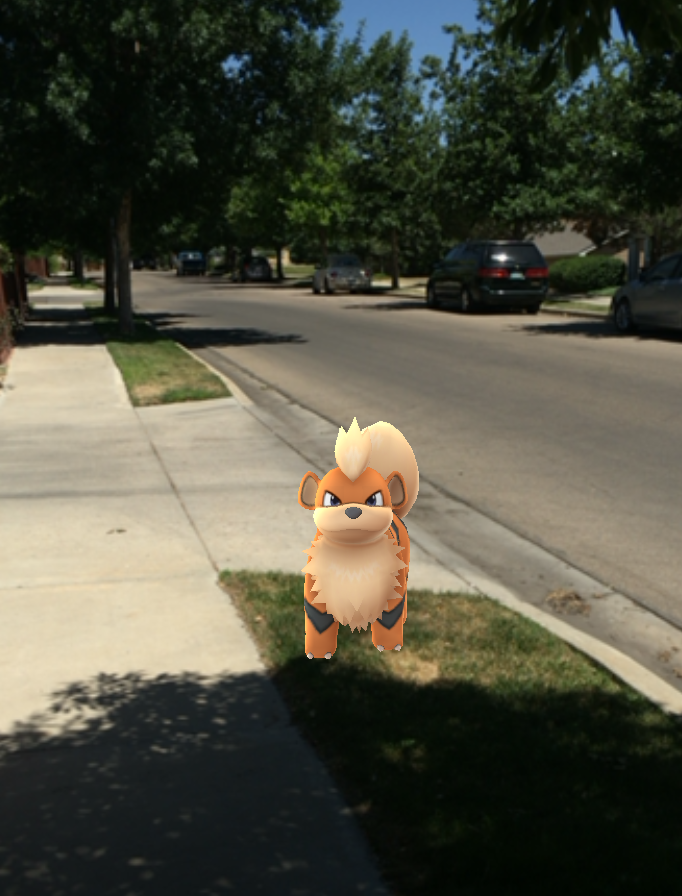 Finally, somebody found a way to enable the meetup between the Virtual World and the Real World, and got the teens off their rockers 🙂 !!!

I received a call of thrilling excitement from our daughter few days ago, for she had just captured her first Pokemon!

Found a Paras hanging out in a patch of prairie dogs pic.twitter.com/DFHgEZGGmz

Well, if you have not yet heard or read about the recent sensation, the game Pokemon Go, you will !

Did you know that the idea for the game was conceived in 2014 as an April Fools’ Day collaboration with Google, called Pokémon Challenge? It’s a game praised by some medical professionals for potentially improving the mental and physical health of players, but attracted some controversy due to reports of causing accidents and being a public nuisance at some locations. The game quickly became one of the most used smart device apps after launching, surpassing the previous record held by Candy Crush Saga in the United States, and was a boon to the stock value of Nintendo, which owns a part of The Pokémon Company. The game Pokemon Go allows players to capture, battle, and train virtual creatures, called Pokémon, who appear throughout the real world. It makes use of GPS and the camera of compatible devices. The game is free-to-play, although it supports in-app purchases of additional gameplay items. An optional companion Bluetooth wearable device is planned for future release, the Pokémon Go Plus, and will alert users when Pokémon are nearby. Pokémon Go is a free-to-play location-based augmented reality mobile game developed by Niantic and published by The Pokémon Company as part of the Pokémon franchise. It was released in July 2016 for iOS and Android devices.

After logging into the app for the first time, the player creates their avatar. The player can choose the avatar’s style, hair, skin, and eye color, and can choose from a limited number of outfits. After the avatar is created, it is displayed at the player’s current location along with a map of the player’s immediate surroundings. Features on the map include a number of PokéStops and Pokémon gyms. These are typically located at public art installations, historical markers, historic buildings, cenotaphs and other memorials, public parks and fountains, places of worship, and other points of cultural significance; these locations are repurposed Ingress portals, Niantic’s previous augmented reality game.

As players travel the real world, the avatar moves along the game’s map. Different Pokémon species reside in different areas of the world; for example, water-type Pokémon are generally found near water. When a player encounters a Pokémon, they may view it either in augmented reality (AR) mode or with a live rendered, generic background. AR mode uses the camera and gyroscope on the player’s mobile device to display an image of a Pokémon as though it were in the real world. Players can take screen shots of the Pokémon 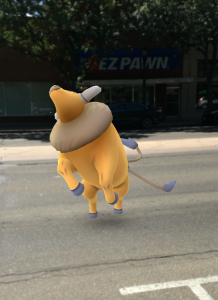 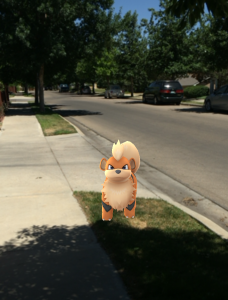 they encounter either with or without the AR mode activated.

Unlike other installments in the Pokémon series, players in Pokémon Go do not battle wild Pokémon to capture them. During an encounter with a wild Pokémon, the player may throw a Poké Ball at it. If the Pokémon is successfully caught, it will come under the ownership of the player. Factors in the success rate of capture include the right force, the right time and the type of Poké Ball used. After capturing a wild Pokémon, the player is awarded two types of in-game currencies: candies and stardust. The candies awarded by a successful catch depends on what evolutionary chain a Pokémon belongs to. A player can use stardust and candies to raise a Pokémon’s “combat power” (CP). However, only candies are needed to evolve a Pokémon. Each Pokémon evolution tree has its own type of candy which can only be used to evolve or level up. The player can also transfer the Pokémon back to the Pokémon professor to earn one more candy and create room for more Pokémon. The ultimate goal of the game is to complete the entries in the Pokédex, a comprehensive Pokémon encyclopedia, by capturing and evolving to obtain the original 151 Pokémon.

The game was released in Australia, New Zealand, and the United States on July 6, 2016.Due to server strain from high demand upon release, Niantic CEO John Hanke stated that the release in most other regions was “paused until Niantic was comfortable” fixing the issues. Pokémon Go was released in Germany on July 13, in the United Kingdom on July 14, and in Italy, Spain and Portugal on July 15. Upon 24 hours after its release, Pokémon Go topped the American App Store‘s “Top Grossing” and “Free” charts.The game has become the fastest game to top the App Store and Google Play, beating Clash Royale. Within two days of release, it was installed on more than 5% of Android devices in the United States, according to SimilarWeb.On July 12, the game became the most active mobile game in the United States ever with 21 million active users, eclipsing Candy Crush Saga‘s peak of 20 million. The average daily usage of the app on Android devices exceeded Snapchat, Tinder, Instagram, and Facebook. By July 15, approximately 1.3 million people were playing the game in the Netherlands, despite the app not being officially released in the country. In the week following the game’s release, Australian servers had problems in Sydney, Melbourne and Brisbane due to the game’s popularity. As a matter of fact, one of the most viewed youtube videos on Pokemon Go is from Australia, with already over 8 million views, below:


Due to government restrictions on map data, nearly all of South Korea is unable to access the game as it uses data from Google Maps. Accordingly, the South Korean branch of The Pokémon Company has made no official announcement on a possible release. However, a small area around Sokcho in the northeastern area of the country is not under the restrictions and numerous people have taken advantage of the gap to play the game. Bus tickets from the capital city of Seoul sold out and people living within Sokcho shared information on free Wi-Fi areas to tourists. Players also discovered a gym in Panmunjom, North Korea, along the Korean Demilitarized Zone; however, Niantic later removed it from the game. In China, Google services are banned by the Great Firewall. Players of Pokémon Go in China bought Australian App Store IDs and used a GPS spoofing app to use Google services and because there are no Pokémon to catch in China. Many Chinese people have downloaded a Pokémon Go clone named, City Spirit Go which was released shortly after Pokémon Go’s beta test in Japan.

Honestly, I did not make these up! Much of the information/data above are gathered from Wikipedia and various reliable sources. People want to play with Pokemon Go! That is certain! The phenomena of all of these people interacting in today’s society is incredibly uplifting. If I weren’t so busy, I’d have liked to start a Windermere Pokemon Go meetup group. So, is there some one out there in Windermere who would be interested in starting a Windermere Pokemon Go meetup group?