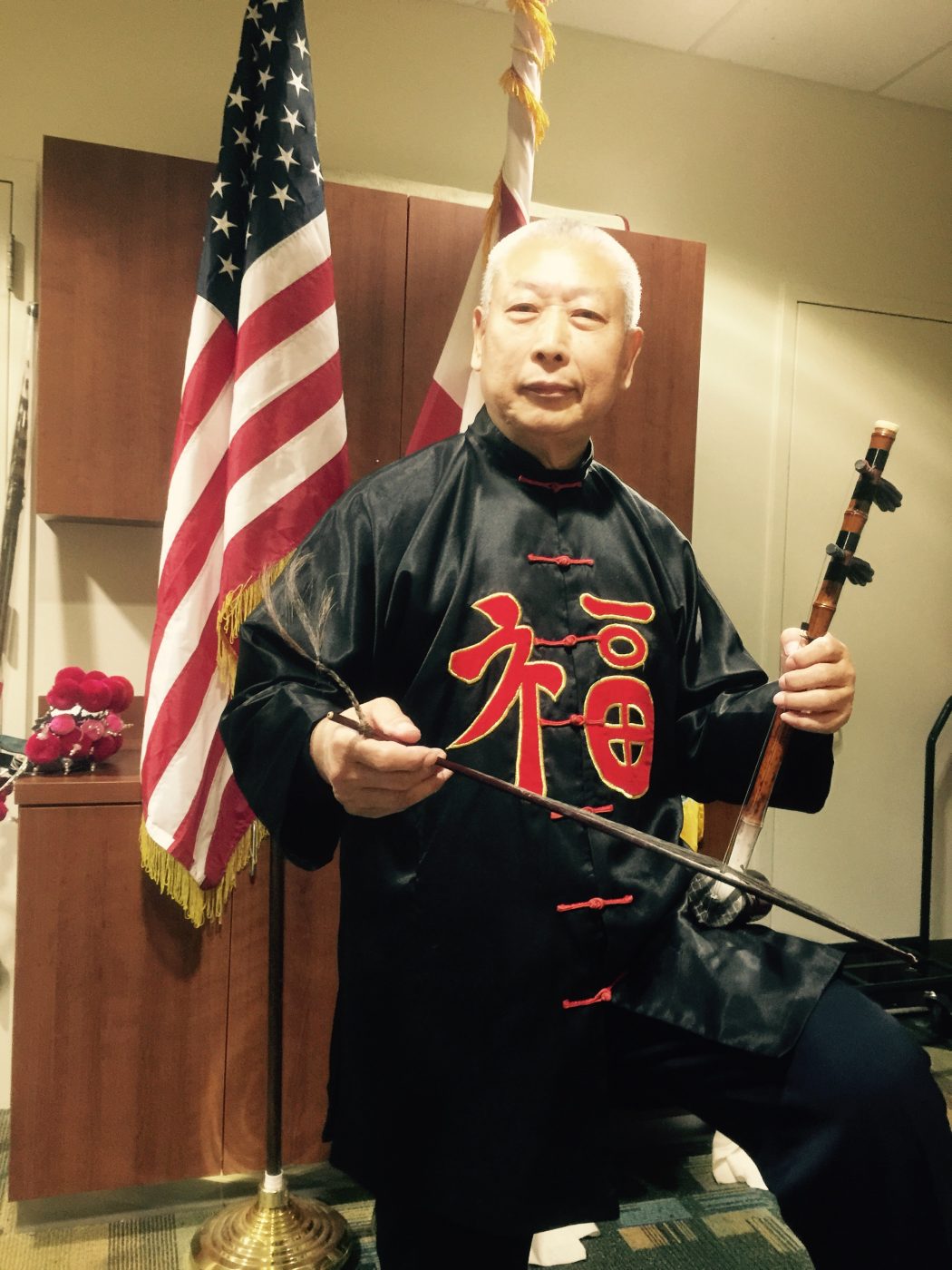 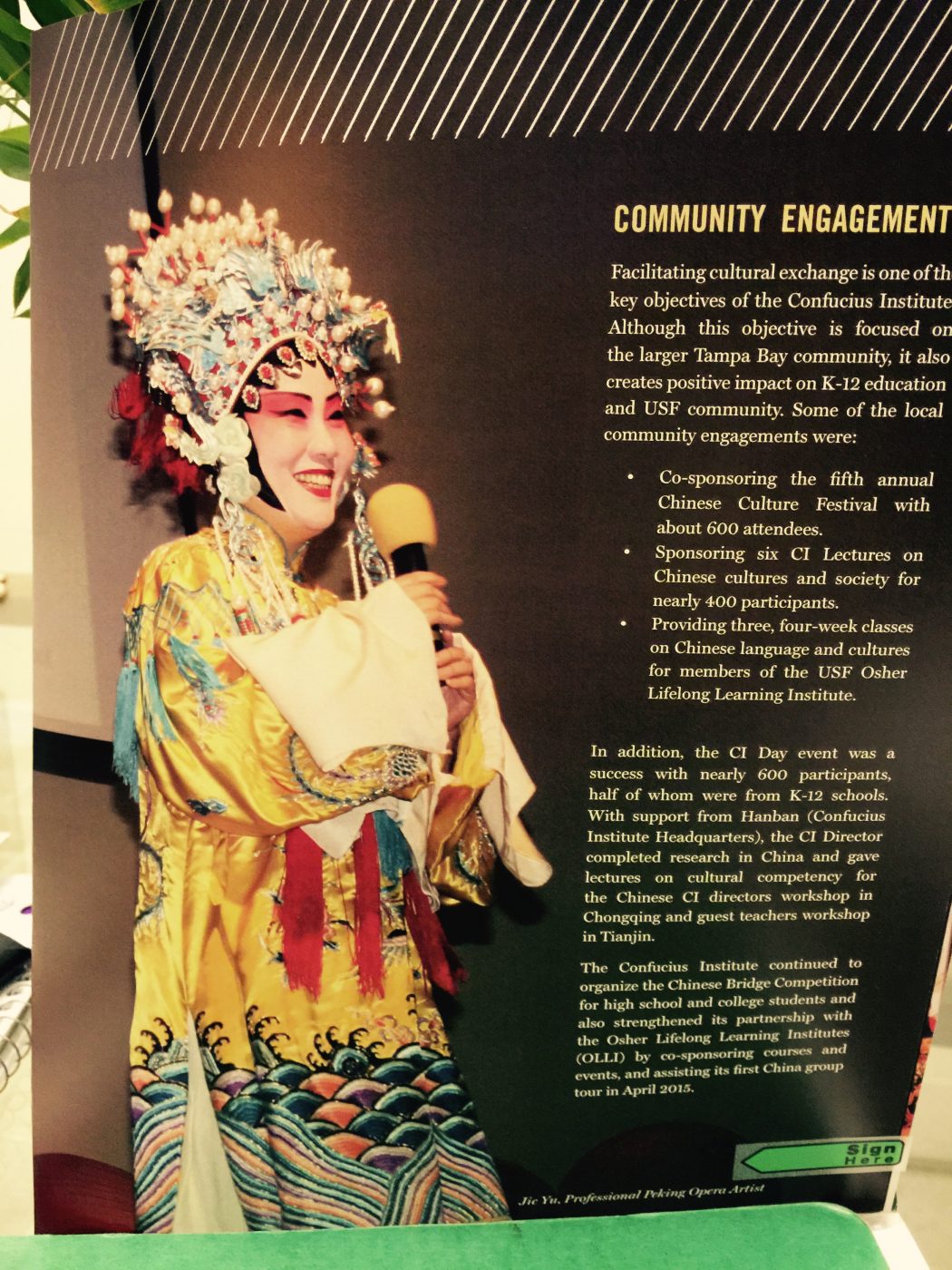 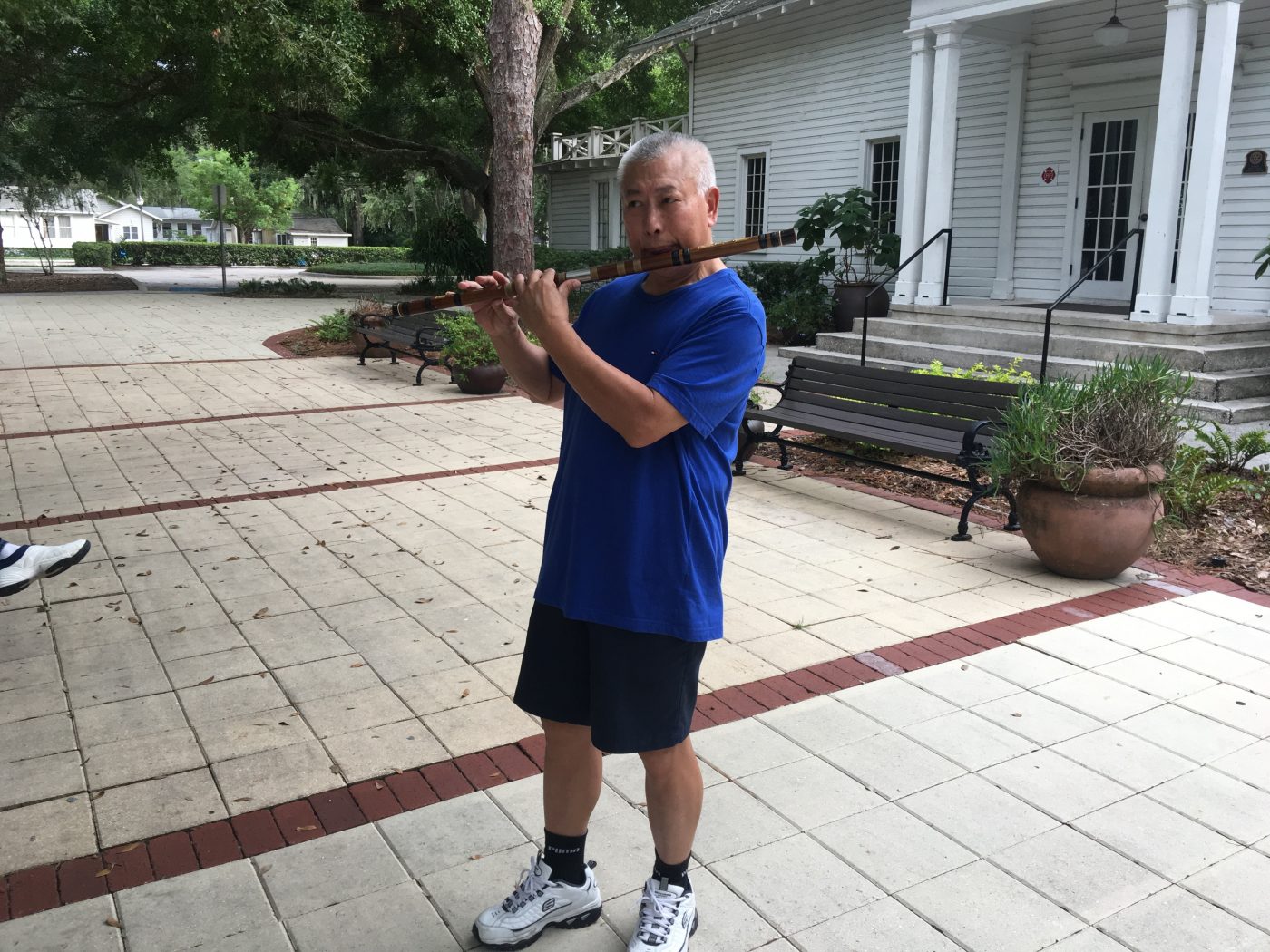 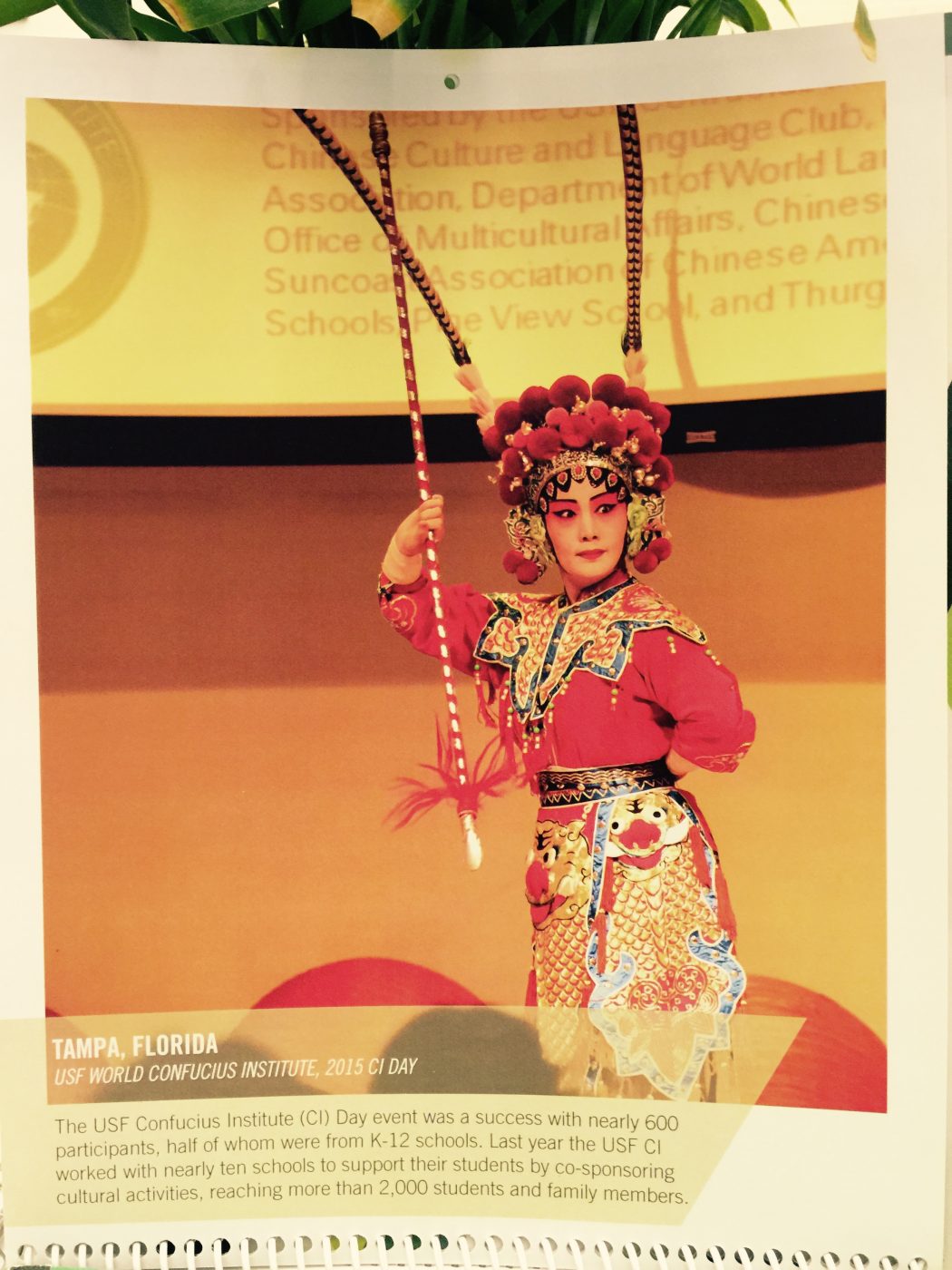 According to the American Community Survey for 2013, China was the origin to the highest number of Asians in the United States, at approximately 24 percent. According to the  most recent estimates available from the United States Census Bureau for the 63 month period from April 1, 2010 to July 1, 2015, Florida ranks as the top 5 states within U.S.A. with fastest population growth rate. Given these two conditions, it is not surprising that one would find more and more Chinese Americans in our state of Florida as time progresses. And with it, we would all have the pleasure of becoming exposed to more Chinese culture through arts and music. 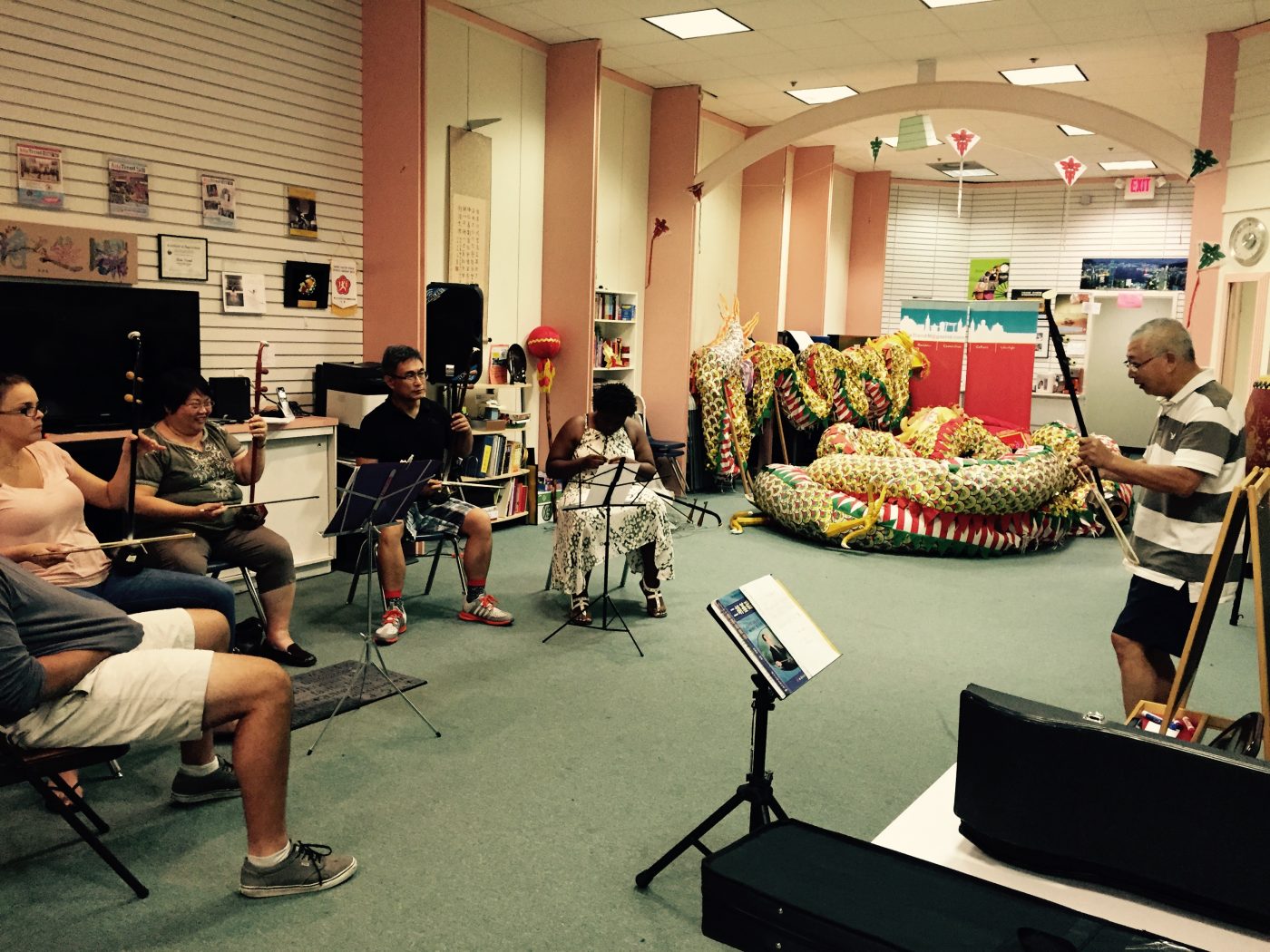 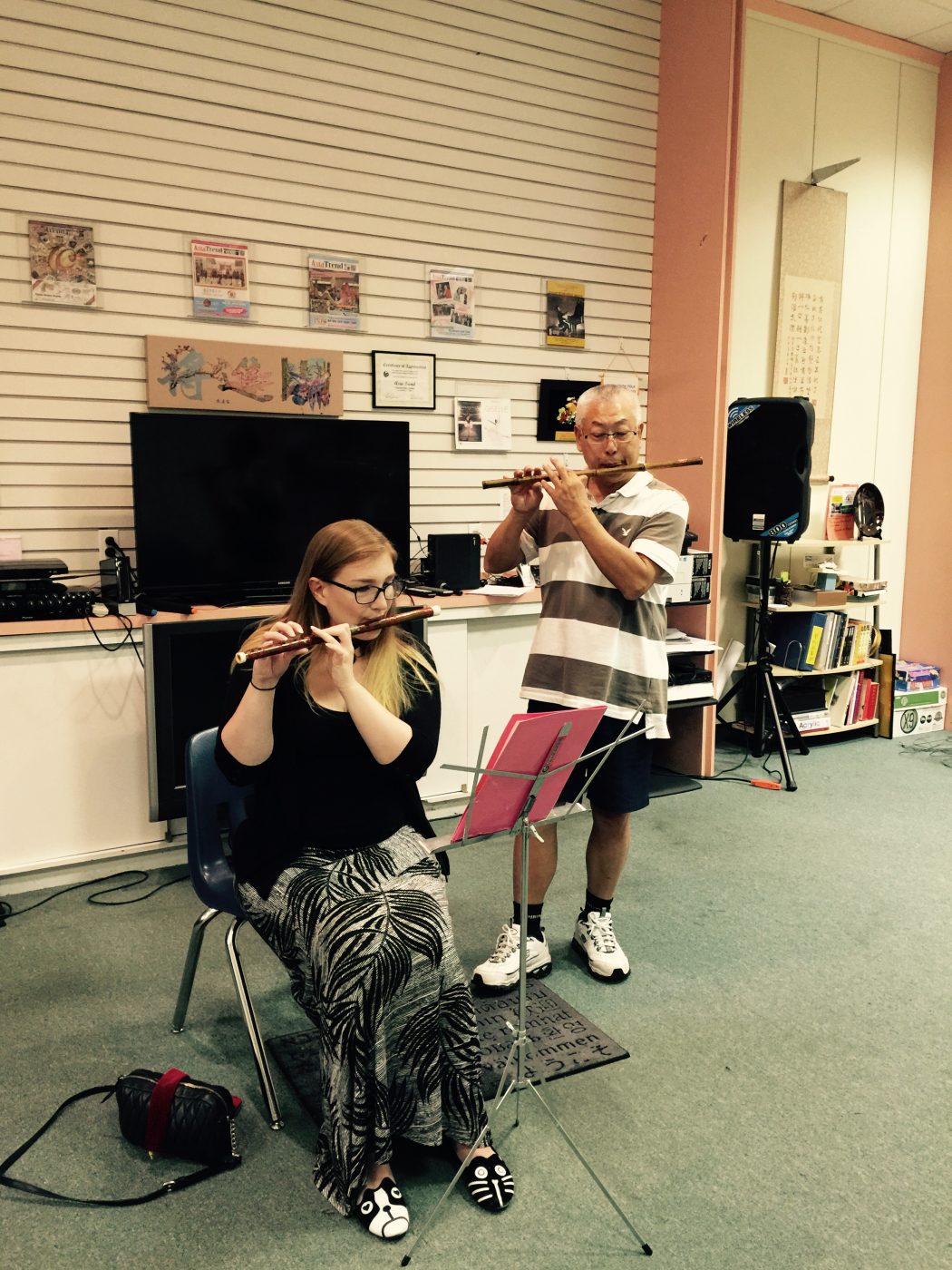 Some of the embassadors for Chinese culture, with decades of performance experience in Chinese arts and music, have lived quietly among us. Two of these embassadors are residents of Central Florida who have recently contacted me,  two Asian American artists/musicians, more specifically Chinese American artists/musicians: Jie Yu ( Peking Opera performer) and Changkui Tang (Chinese musical instruments artist and professor in Dizi or Chinese bamboo flute/Chinese transverse flute, Erhu  or Chinese 2-stringed fiddle, various Percussions, Woodwind, and Compositions). As many former visitors to Florida (including yours truly), once these two artists/musicians arrived in Florida from  New York, they found the place where they called home and stayed for these past eighteen years.

Mr. /Professor Changkui Tang was the first-chair musician and director of the traditional music band at China Air Force Performing Troupe in Beijing, also a member of the Chinese Musicians Association, specializing in Chinese flutes, percussion, and composition. Professor Tang has performed bamboo flute, drum, string instruments, and various Chinese folk instruments for over 40 years and has won many awards at national music competitions and art festivals. He had been invited to perform in Thailand, Canada, and various parts of the United States (some of which took place in Florida) for many cultural festivals and special events. Changkui Tang and Jie Yu have both performed in Splendid China many years and  also members of the Amerina Performing Group. Amerina Performing Group provided world class entertainment featured spectacular variety of breath-taking martial arts, folk dances, and Peking opera dances, in amazing costumes and award winning live Chinese music. This group focused on promoting Chinese performing arts and entertainment in U.S.A. and to support the culture and art exchange and communication between China and U.S.A.

To get a glimpse of Professor Tang’s playing of his Dizi, Erhu, and his sharing of his music with his students, please view these videos below:

The Erhu (Chinese: 二胡; pinyin: èrhú; [ɑɻ˥˩xu˧˥]) is a two-stringed bowed musical instrument, more specifically a spike fiddle, which may also be called a Southern Fiddle, and sometimes known in the Western world as the Chinese violin or a Chinese two-stringed fiddle. It is used as a solo instrument as well as in small ensembles and large orchestras. It is the most popular of the Huqin family of traditional bowed string instruments used by various ethnic groups of China. A very versatile instrument, the erhu is used in both traditional and contemporary music arrangements, such as in pop, rock, jazz, etc. and makes a calm sound.

The dizi (Chinese: 笛子; pinyin: dízi, pronounced [tǐt͡sɨ]), is a Chinese transverse flute. It is also sometimes known as the di (笛) or héngdi (橫笛), and has varieties including the qūdi (曲笛) and bāngdi (梆笛).The dizi is a major Chinese musical instrument, and is widely used in many genres of Chinese folk music, as well as Chinese opera, and the modern Chinese orchestra. Traditionally, the dizi has also been popular among the Chinese common people, and it is simple to make and easy to carry. Most dizi are made of bamboo, which explains why dizi are sometimes known by simple names such as Chinese bamboo flute. However, “bamboo” is perhaps more of a Chinese instrument classification like “woodwind” in the West. Northern Chinese dizi are made from purple or violet bamboo, while dizi made in Suzhou and Hangzhou are made from white bamboo. Dizi produced in southern Chinese regions such as Chaozhou are often made of very slender, lightweight, light-colored bamboo and are much quieter in tone. Although bamboo is the common material for the dizi, it is also possible to find dizi made from other kinds of wood, or even from stone. Jade dizi (or yudi, 玉笛) are popular among both collectors interested in their beauty, and among professional players who seek an instrument with looks to match the quality of their renditions; however, jade may not be the best material for dizi since, as with metal, jade may not be as tonally responsive as bamboo, which is more resonant. The dizi is not the only bamboo flute of China, although it is certainly distinctive. Other Chinese bamboo wind instruments include the vertical end-blown xiao and the koudi.       Peking opera or Beijing opera (simplified Chinese: 京剧; traditional Chinese: 京劇; pinyin: Jīngjù) is a form of traditional Chinese theatre which combines music, vocal performance, mime, dance, and acrobatics. It arose in the late 18th century and became fully developed and recognized by the mid-19th century. The form was extremely popular in the Qing dynasty court and has come to be regarded as one of the cultural treasures of China. Major performance troupes are based in Beijing and Tianjin in the north, and Shanghai in the south. The art form is also preserved in Taiwan, where it is known as Guójù (traditional Chinese: 國劇; simplified Chinese: 国剧; literally: “National theatre”). It has also spread to other countries such as the United States and Japan. Peking opera features four main types of performers. Performing troupes often have several of each variety, as well as numerous secondary and tertiary performers. With their elaborate and colorful costumes, 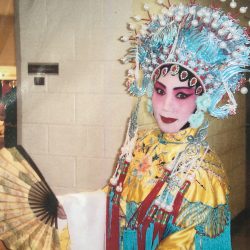 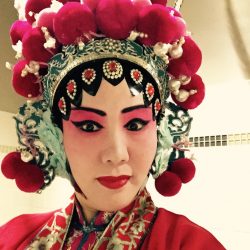 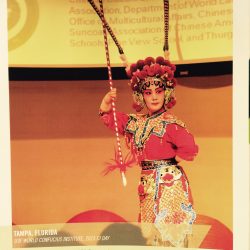 performers are the only focal points on Peking opera’s characteristically sparse stage. They use the skills of speech, song, dance, and combat in movements that are symbolic and suggestive, rather than realistic. Above all else, the skill of performers is evaluated according to the beauty of their movements. Performers also adhere to a variety of stylistic conventions that help audiences navigate the plot of the production. The layers of meaning within each movement must be expressed in time with music. The music of Peking opera can be divided into the Xipi (西皮) and Erhuang (二黄) styles. Melodies include arias, fixed-tune melodies, and percussion patterns. The repertoire of Peking opera includes over 1,400 works, which are based on Chinese history, folklore, and, increasingly, contemporary life. Below, is a video of Jie Yu’s Peking opera performance of Matchmaking of a Top Scholar  狀元紅,at the Orlando Chinese Professionals Association (OCPA) at Chinese New Year Gala 2012.

Whether you are a kid, teen, young adult, or senior, what a wonderful way to learn about the ancient culture of China through Chinese performing arts, Peking opera and musical instruments!