Celebrating Duanwu (aka Dragon Boat Race) Festival-June 4, 2016, at Lake Fairview Park, For the Love of Their Poet 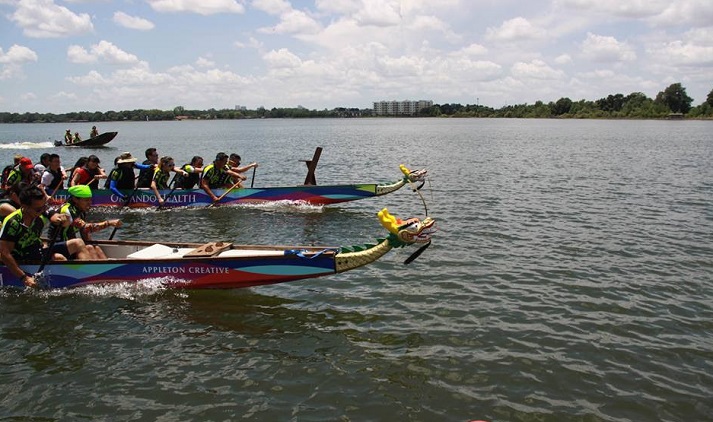 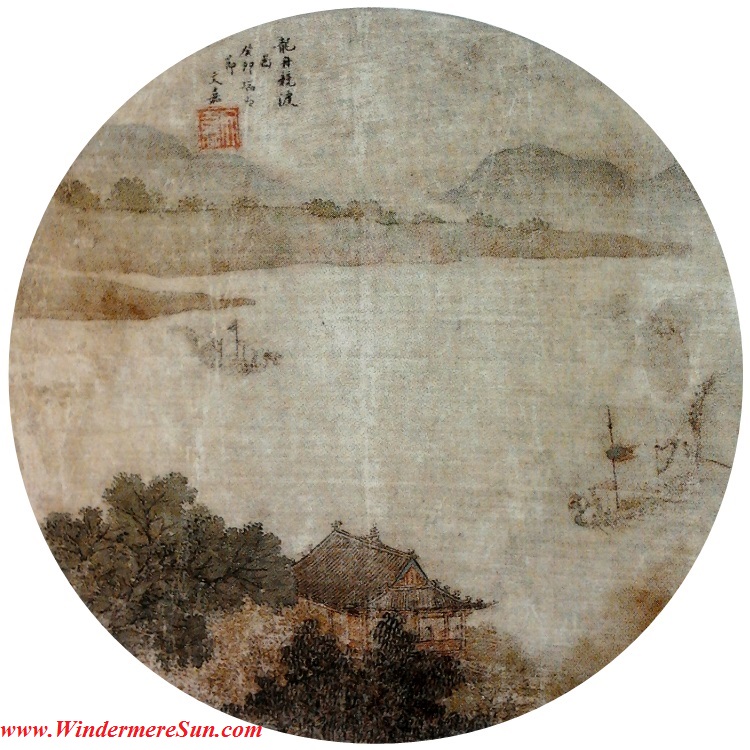 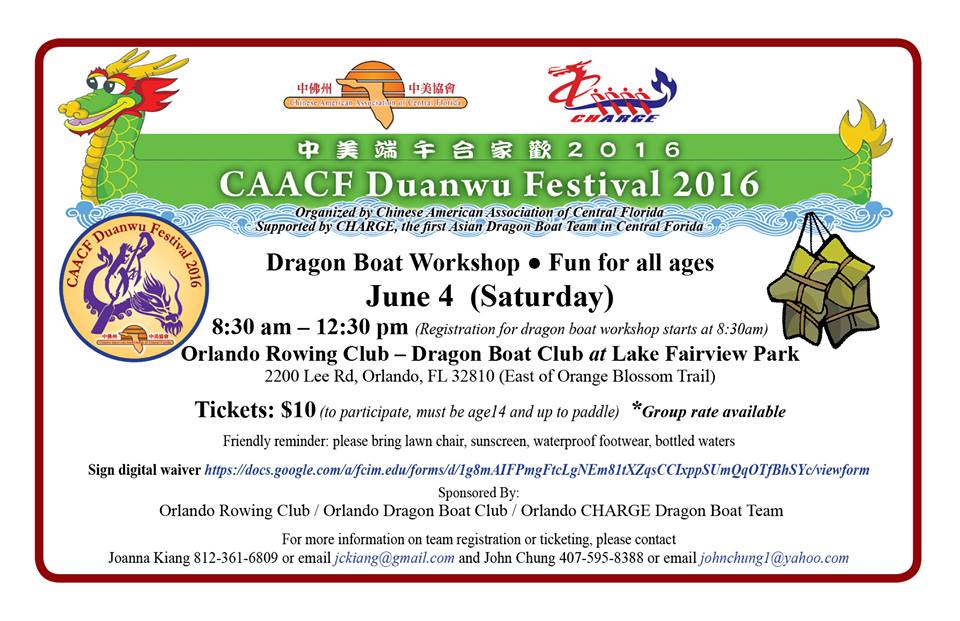 Finally, there is a week that I will be able to attend the meetup group for Dragon Boat Race practice, on Thursday (May 26, 2016), between 6:30-7:30 pm at Lake Fairview Park, 2200 Lee Road, Orlando, FL, between 6:30-7:30 pm. I am quite excited because Dragon Boating is one of the world’s most popular water sports, and the fastest growing water sports in Florida, for individuals, private, and corporate teams.

Check out what’s been presented about this group activity, in Italics, below:

Dragon boating is a fun and accessible sport for people of all ages who are reasonably fit, a team player and enjoy being on the water. It’s a great  cardio workouts and all-around fitness. Most clubs cater for both competitive and non- competitive members and all enjoy the fun, social aspect of the sport as well. Race distances vary, with the standard race distance being 500 m.  Sprints of 200 m are common at regattas, as is the 2,000 m race. Want to give it a try?  This practice is an open practice and recommended for all paddlers (even those that have never paddled before). First and second timers can “check us out for free”. First Timers need to arrive at least 15-30 minutes early!

* Entrance have a ORC Orlando Dragon Boat Club sign there outside of a small white house.  There is a gate.  Come inside and you will see the team there.

For the practices, we’ll have the paddles and life vests available, so you’ll only need to secure the rest:a drink (bottled water recommended), comfy workout clothes (moisture wicking if you have) .

To understand some historical background behind this water sports, please view what wikipedia has provided for us, below:

A dragon boat is a human-powered watercraft. They were traditionally made in the Pearl River Delta region of China‘s southern Guangdong Province out of teak wood (mostly imported from Pontianak, Indonesia) to various designs and sizes. In other parts of China, different kinds of wood are used to build these traditional watercraft. It is one of a family of traditional paddled long boats found throughout Asia, Africa, the Pacific islands and also Puerto Rico. Currently, boats are being made for competitive purposes out of carbon fiber and other lightweight materials.

Dragon boats are the basis of the team paddling sport of dragon boat racing, a watersport which has its roots in an ancient folk ritual of contending villagers, which has been held for over 2000 years throughout southern China. While competition has taken place annually for more than 20 centuries as part of religious ceremonies and folk customs, dragon boat racing has emerged in modern times as an international sport, beginning in Hong Kong in 1976. But the history of dragon boats in competition reaches as far back as the same era as the original games of Olympia in ancient Greece. Both dragon boat racing and the ancient Olympiad included aspects of religious observances and community celebrations along with competition.

For competition events, dragon boats are generally rigged with decorative Chinese dragon heads and tails. At other times (such as during training), decorative regalia is usually removed, although the drum often remains aboard for drummers to practice.Dragon boat races were traditionally held as part of the annual Duanwu Festival or Duen Ng observance in China. Not understanding the significance of Duanwu, 19th-century European observers of the racing ritual referred to the spectacle as a “dragon boat festival”. This is the term that has become known in the West.

Dragon boat racing, like Duanwu, is observed and celebrated in many areas of east Asia with a significant population of ethnic Chinese such as Singapore, Malaysia, and the Riau Islands, as well as having been adopted by the Ryukyu Islands since ancient times. The date on which races were held is referred to as the “double fifth” since Duanwu is reckoned as the fifth day of the fifth lunar month, which often falls on the Gregorian calendar month of June and occasionally in May or July. Duanwu is reckoned annually in accordance with the traditional calendar system of China, which is a combination of solar and lunar cycles, unlike the solar-based Gregorian calendar system.

Let’s take a look at some of the previous Dragon Boat Festival in Orlando.

2011 Orlando Dragon Boat Festival (a look at these paddlers’ ENERGY & ZEST!), below:

2014 Dragon Boat Race Orlando Florida (a look at how fast the Dragon Boats can move), below:
2015 Orlando Dragon Boat Festival (at Turkey Lake, so much FUN at Duanwu Festival/Dragon Boat Race Festival!), below:  The story best known in modern China holds that the festival commemorates the death of the poet and minister Qu Yuan (c. 340–278 BC) of the ancient state of Chu during the Warring States period of the Zhou Dynasty. A cadet member of the Chu royal house, Qu served in high offices. However, when the king decided to ally with the increasingly powerful state of Qin, Qu was banished for opposing the alliance and even accused of treason. During his exile, Qu Yuan wrote a great deal of poetry. Twenty-eight years later, Qin captured Ying, the Chu capital. In despair, Qu Yuan committed suicide by drowning himself in the Miluo River. 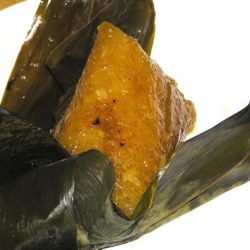 Zongzi (tetrahedral shaped in southern China to elongated cone in northern China, rice balls used to save life or body of the poet Qu Yuan) (credit:Benjwong under public domain) 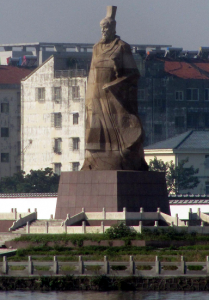 Qu Yuan in Jingzhou, at the site of the former Chu capital Ying. (Credit: Popolon, under Creative Commons, w/attribution, share-alike)

Despite the modern popularity of the Qu Yuan origin theory, in the former territory of the state of Wu, the festival commemorated Wu Zixu (died 484 BC). Wu Zixu was a loyal advisor whose advice was ignored by the king to the detriment of the kingdom. Wu Zixu was forced to commit suicide by the king Fuchai, with his body thrown into the river on the fifth day of the fifth month. After his death, in places such as Suzhou, Wu Zixu is remembered during the Duanwu Festival to this day.

Although Wu Zixu is commemorated in southeast Jiangsu and Qu Yuan elsewhere in China, much of Northeastern Zhejiang including the cities of Shaoxing, Ningbo and Zhoushan celebrates the memory of the young girl Cao E (曹娥, AD 130–143) instead. Cao E’s father Cao Xu (曹盱) was a shaman who presided over local ceremonies at Shangyu. In 143, while presiding over a ceremony commemorating Wu Zixu during the Duanwu Festival, Cao Xu accidentally fell into the Shun River. Cao E, in an act of filial piety, decided to find her father in the river, searching for 3 days trying to find him. After five days, she and her father were both found dead in the river from drowning. Eight years later, in 151, a temple was built in Shangyu dedicated to the memory of Cao E and her sacrifice for filial piety. The Shun River was renamed Cao’e River in her honour.

The stories of both Qu Yuan and Wu Zixu were recorded in Sima Qian‘s Shiji, completed 187 and 393 years after the events, respectively because historians gave high praise to both characters. Modern research suggests that the stories of Qu Yuan or Wu Zixu were superimposed onto a pre-existing holiday tradition. The promotion of these stories might be encouraged by Confucian scholars, seeking to legitimize and strengthen their influence in China.

Another theory, advanced by Wen Yiduo, is that the Dragon Boat Festival had its origins in dragon worship. Support is drawn from two key traditions of the festival: the tradition of dragon boat racing and zongzi. The food may have originally represented an offering to the dragon king, while dragon boat racing naturally reflects reverence of the dragon and the active yang energy associated with it. This combines with the tradition of visiting friends and family on boats.

Another suggestion is that the festival celebrates a widespread feature of east Asian agrarian societies: the harvest of winter wheat. Offerings were regularly made to deities and spirits at such times: in the ancient Yue, dragon kings; in the ancient Chu, Qu Yuan; in the ancient Wu, Wu Zixu (as a river god); in ancient Korea, mountain gods (see Dano). As interactions between different regions increased, these similar festivals eventually merged into one holiday.

Now, let’s move on to our more immediate concern: How to Paddle on a Dragon Boat Team! Take a look at these more experienced experts, sharing their years of experience, below:

Finally, No festival is quite complete unless it  has its very own Signature Food! In this case, Duanwu/Dragon Boat Festival is known for its Zongzi (Chinese: 粽子; Cantonese Yale: jung3 ji2) ,or simply zong (Chinese: 粽; Cantonese Yale: jung3)), is a traditional Chinese food, made of glutinous rice stuffed with different fillings and wrapped in bamboo, reed, or other large flat leaves. They are cooked by steaming or boiling. In the Western world, they are also known as rice dumplings, or sticky rice dumplings.

I can already hear the requests for making of Zongzi, video shared below (keep in mind that the fillings of zongzi may be: red bean paste, jujubes, char siu, mung beans, Chinese sausage, BBQ pork, Chinese black mushrooms, slated duck eggs, chestnuts, cooked peanuts, conpoy (dried scallops), red-cooked pork, chicken. It is up to you, the zongzi-maker, to decide if your zongzi should be sweet or salty.)

Have a great time at Duanwu Festival for viewing of the Dragon Boat Race and taste of zongzi!

Here is the digital waiver form (prepared & requested by C.H.A.R.G.E.) you need to sign in order to participate (you also need to be 14 or older) in paddling on June 4, 2016. Keep in mind that there will be many other fun-filled activities as well.

Don’t forget to bring your own lawn chair, sunscreen, bottled water, waterproof footwear, and admission fee $10 (must be 14 or older to paddle) on June 4, 2016, to Lake Fairview Park for a terrific Duanwu Festival/Dragon Boat Festival!

~Let’s Help One Another~
Any comments, suggestions, concerns regarding this post will be welcomed at [email protected]
Gathered, written, and posted by Windermere Sun-Susan Sun Nunamaker
More about the community at www.WindermereSun.com
Please also get into the habit of checking at these sites below for more on solar energy topics: