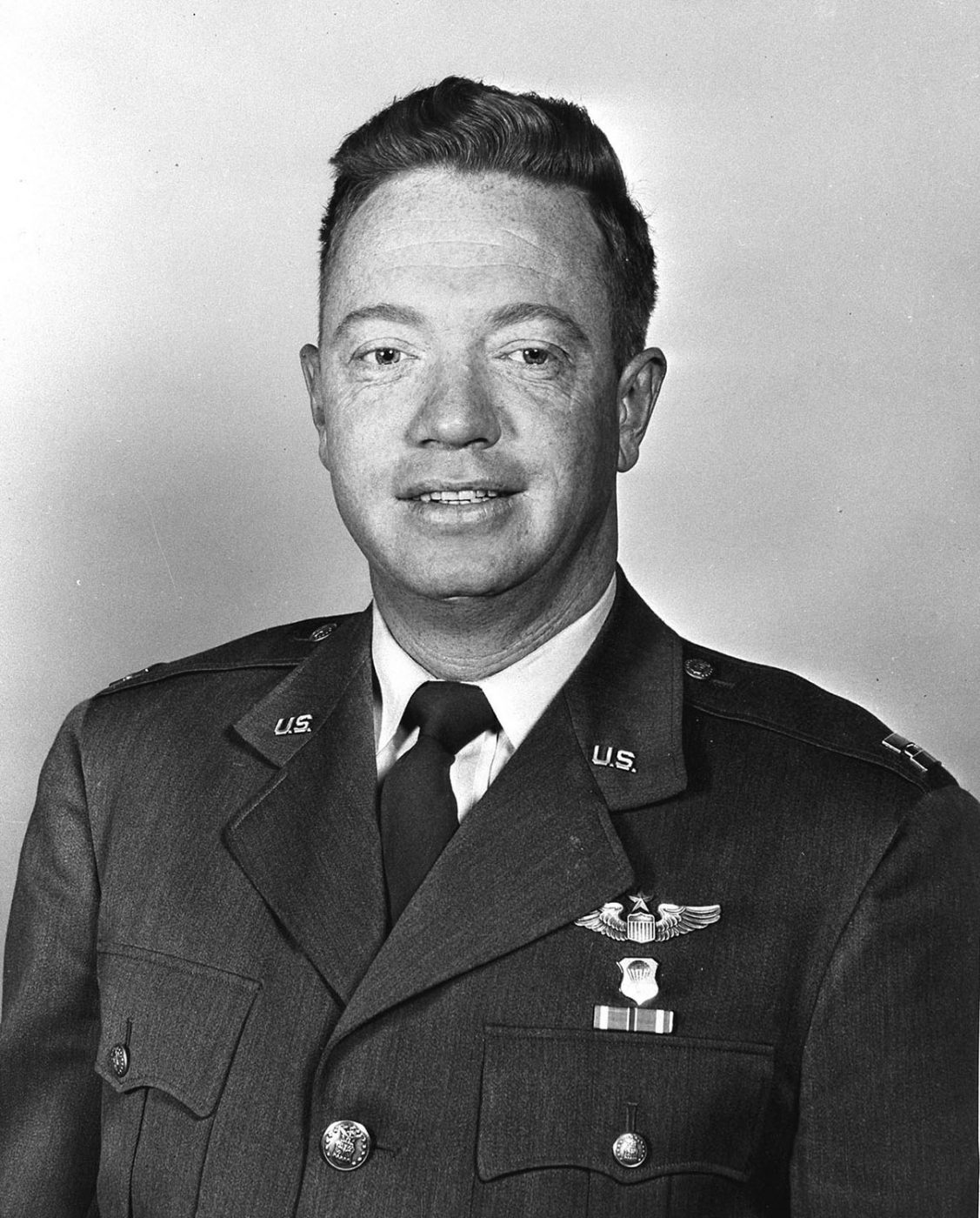 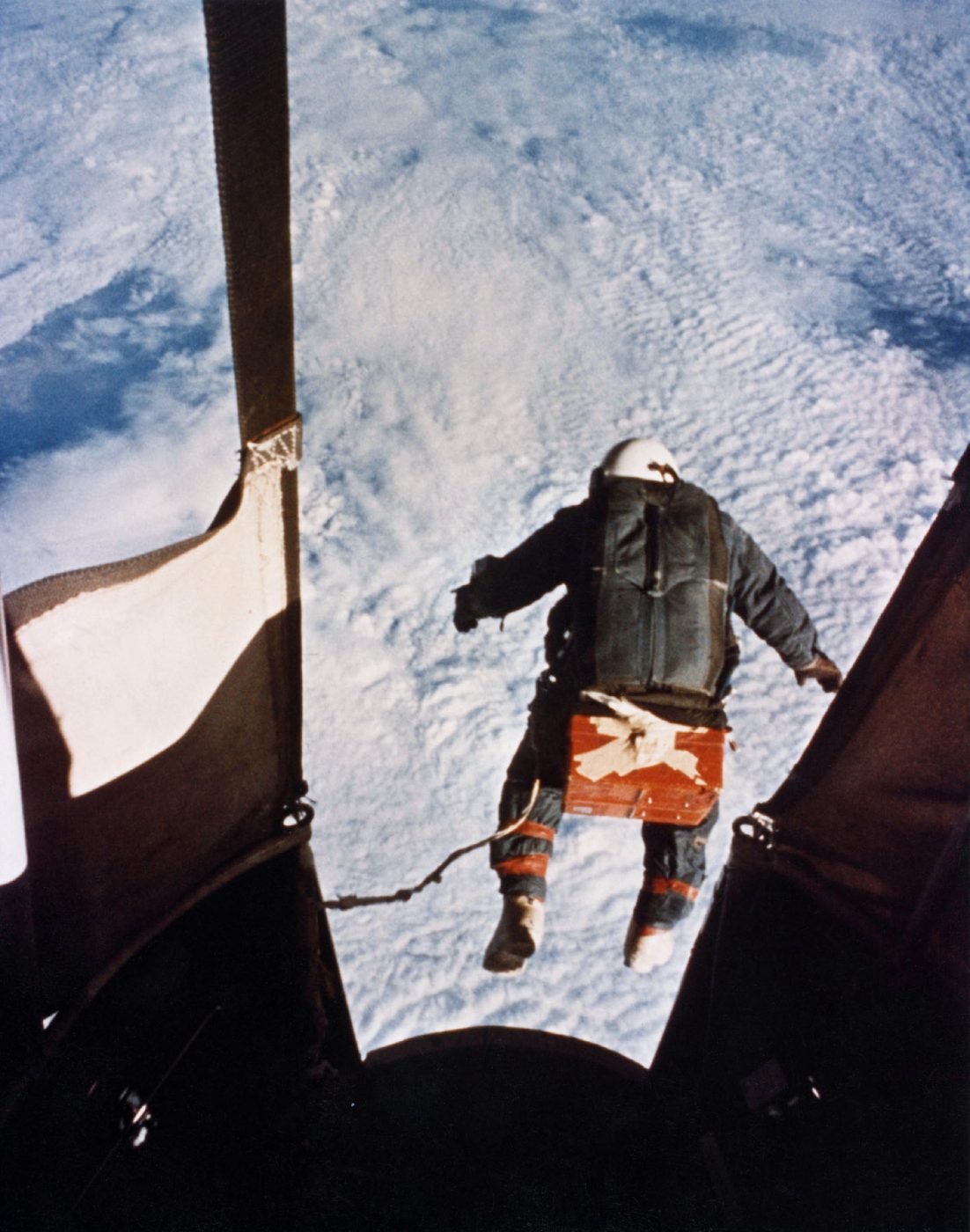 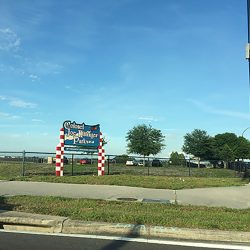 After much digging/surfing, I found out that Colonel Joseph Kittinger is still active in aeronautics,  living in Orlando, Florida, a war hero and all around incredible guy. He took part in Project Excelsior, high altitude parachute testing, holding record of jumping from 102,000 feet. During this event, his free falling broke the sound barrier. 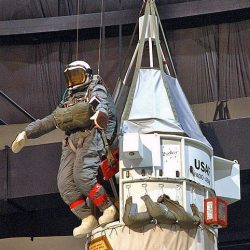 Kittinger-Replica of Excelsior III gondola and mannequin of Kittinger at the National Museum of the U.S. Air Force

Some details are found, in italics, from wikipedia, below:

Joseph William Kittinger II (born July 27, 1928) is a retired Colonel in the United States Air Force and a USAF Command Pilot. Following his initial operational assignment in fighter aircraft, he participated in Project Manhigh and Project Excelsior in 1960, setting a world record for the highest skydive from a height greater than 31 kilometres (19 mi). He was also the first man to make a solo crossing of the Atlantic Ocean in a gas balloon. Serving as a fighter pilot during the Vietnam War, he achieved an aerial kill of a North Vietnamese MiG-21 jet fighter and was later shot down himself, spending 11 months as a prisoner of war in a North Vietnamese prison. In 2012, at the age of 84, he participated in the Red Bull Stratos project as capsule communicator, directing Felix Baumgartner on his record-breaking 39-kilometer (24 mi) freefall from Earth’s stratosphere, exceeding Kittinger’s earlier freefall in 1960. Kittinger’s records for highest parachute jump and fastest velocity stood for 52 years, until they were broken in 2012 by Felix Baumgartner.

Amazing! It is very rare in aviation history for any record to last that long! What an amazing life!!!

Of the jumps from Excelsior, Kittinger said:

“There’s no way you can visualize the speed. There’s nothing you can see to see how fast you’re going. You have no depth perception. If you’re in a car driving down the road and you close your eyes, you have no idea what your speed is. It’s the same thing if you’re free falling from space. There are no signposts. You know you are going very fast, but you don’t feel it. You don’t have a 614-mph wind blowing on you. I could only hear myself breathing in the helmet.” 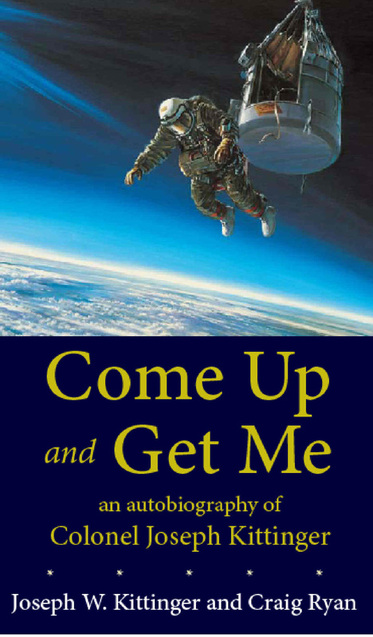 Any comments, suggestions, concerns regarding this post will be welcomed at [email protected]
Photographed, gathered, written, and posted by Windermere Sun-Susan Sun Nunamaker
More about the community at www.WindermereSun.com
Please also get into the habit of checking at these sites below for more on solar energy topics: