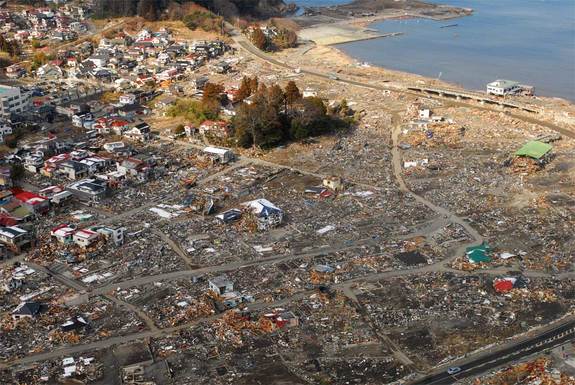 An aerial view of damage to Sukuiso, Japan, a week after the earthquake and subsequent tsunami devastated the area in March, 2011. (credit: Dylan McCord. U.S. Navy)


Just a quick note to remind you all that this month (March) is the five year anniversary of the Great East Japan Earthquake (magnitude 9.0).On March 11, 2011, much of the northeastern coast of Japan was washed away by massive tsunami. Its devastating effects were felt around the world, from fjords of Norway to ice sheet of Antarctica. Tsunami debris continued to wash up on North American beaches even two or three years later. Many people in Japan lost their loved ones, their homes, their way of life, and many residents are still recovering from the disaster, according to Japan Reconstruction Agency. Countless volunteers from around the world came to Japan’s rescue and helped to begin the long process of rebuilding through donating time, money, and organizing events to show that they care about Japan and people of Tohoku.

Tonight, March 31, 2016, between 6:00-8:30 pm, at Fashion Square Mall (near JC Penny on the first floor), 3201 E. Colonial Dr., M-25, Orlando, FL, Tohoku Tomo tells their story through a film, “113project:reclaim Tohoku“. This event is sponsored by Asia Trend/Y.E.S.S. Center, and local community group Orlando Tewassa Group whose mission is to support survivors from Tohoku Earthquake. This is a fundraising event to help raise fund to continue assisting residents of Tohoku to rebuild. Your donations will be welcomed to Orlando Tewassa Group. Bento Box Dinners provided by Bento Cafe are available for purchase for fundraising. $5 each for a bottle of water. The event will proceed:

For more details or if you can’t make it to the film but would like to help, please feel free to check with: