Let’s Celebrate the Beginning of the Year of the Monkey! 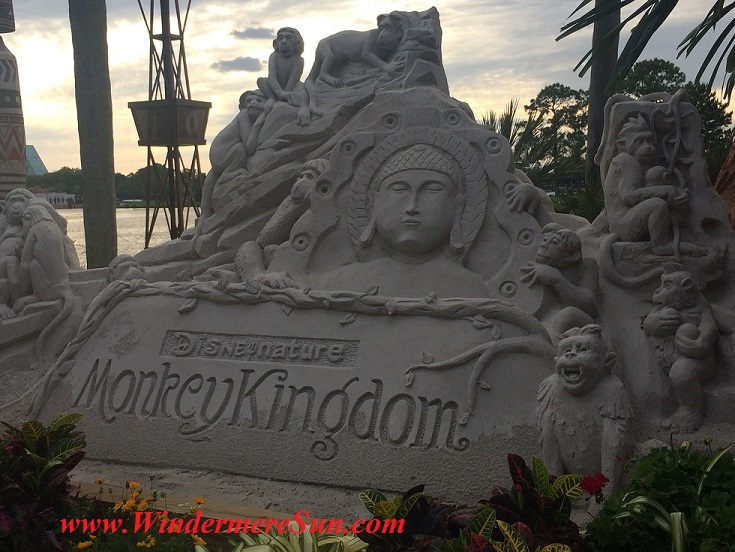 Although the Chinese calendar traditionally does not use continuously numbered years, outside China its years are often numbered from the reign of the 3rd millennium BCE Yellow Emperor. But at least three different years numbered 1 are now used by various scholars, making the year beginning CE 2015 the “Chinese year” 4713, 4712, or 4652 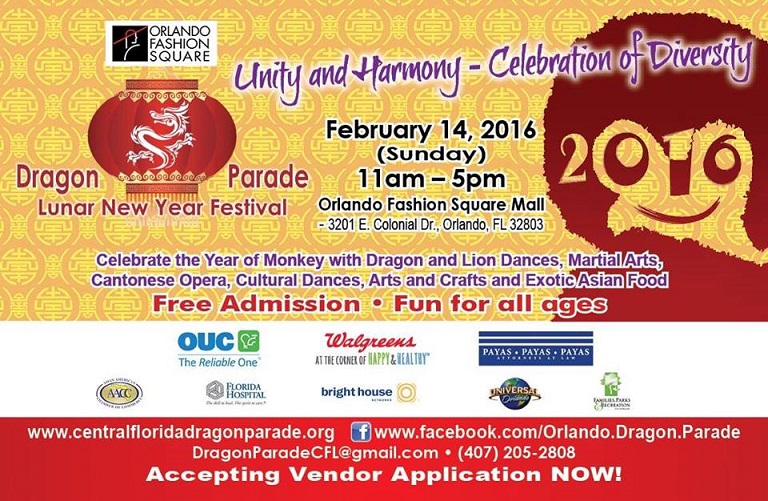 So, this week, throughout the planet earth, many people of Asian/Chinese descent would be celebrating. Chinese New Year (also known as the Spring Festival) is celebrated in countries and territories with significant Chinese populations, including Mainland China, Hong Kong, Macau, Taiwan, Singapore, Thailand, Cambodia, Indonesia, Malaysia, Mauritius, Vietnam,  Philippines, now also in many European nations, USA, and Australia. Celebrations traditionally run from the evening preceding the first day, to the Lantern Festival on the 15th day of the first calendar month. The first day of the New Year falls on the new moon between January 21 and February 20. In 2016, the first day of Chinese New Year falls on Monday, February 8th. 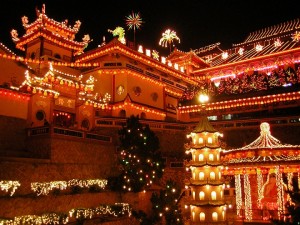 If you’re interested in seeing or experiencing some of the interesting performances, food, music, arts and crafts of the Chinese and Asian culture here in Florida, check out the Dragon Parade Lunar New Year Festival that will take place on Sunday, February 14, 2016, 11:00 am-5:00 pm, in Orlando Fashion Square Mall at 3201 E. Colonial Dr., Orlando, FL  32803. There will be Dragon and Lion Dances, Martial Arts, Cantonese Opera, Cultural Dances, Arts and Crafts, and Exotic Asian Food. Admission is free. It will be fun for people of all ages. So, be sure to mark your calendar and come out to celebrate the Year of the Monkey to bring you good luck and prosperity for rest of the lunar year!

Within China, regional customs and traditions concerning the celebration of the Chinese New Year vary widely. Often, the evening preceding Chinese New Year’s Day is an occasion for Chinese families to gather for the annual reunion dinner. It is also traditional for every family to thoroughly cleanse the house, in order to sweep away any ill-fortune and to make way for good incoming luck. Windows and doors will be decorated with red color paper-cuts and couplets with popular themes of “good fortune” or “happiness“, “wealth”, and “longevity”.

Other activities include lighting firecrackers and giving money in red paper envelopes to the youths of the family. 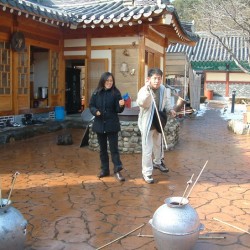 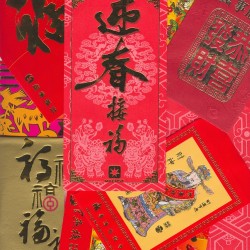 Some other well known traditions are: 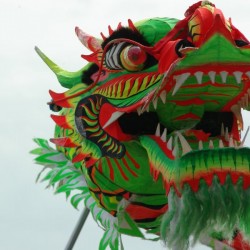 The dance is performed by a team of dancers who manipulate a long flexible figure of a dragon using poles positioned at regular intervals along the length of the dragon. The dance team mimics the supposed movements of this river spirit in a sinuous, undulating manner. 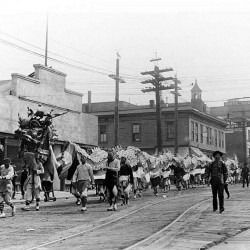 Chinese dragons are a symbol of China, and they are believed to bring good luck to people, therefore the longer the dragon in the dance, the more luck it will bring to the community. The dragons are believed to possess qualities that include great power, dignity, fertility, wisdom and auspiciousness. The appearance of a dragon is both frightening and bold but it has a benevolent disposition, and so eventually became an emblem to represent imperial authority. The movements in a performance traditionally symbolize historical roles of dragons demonstrating power and dignity. 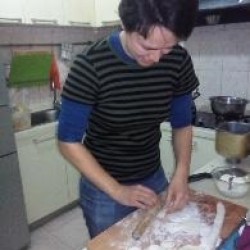 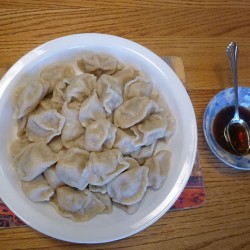 and year round in the northern provinces. They are shaped like the golden ingots yuan bao used during the Ming Dynasty for currency and the name sounds like the word for the earliest paper money, so serving them is believed to bring prosperity. Many families eat these dumplings/jiaozi at midnight on Chinese New Year’s Eve. Video on “How To Make Chinese Dumplings” shared below:


Some cooks would even hide a clean coin or special ingredient symbolizing treasure in one of the jiaozi (dumpling). So whoever is able to find/eat the treasure would have good luck in the coming year. Jiaozi were so named because they were horn shaped. The Chinese word for “horn” is jiao (Chinese: 角; pinyin: jiǎo), and jiaozi was originally written with the Chinese character for “horn”, but later it was replaced by a specific character 餃, which has the food radical on the left and the phonetic component jiāo (交) on the right. Jiaozi are eaten all year round, and can be eaten at any time of the day – breakfast, lunch or dinner. They can constitute one course, starter or side dish, or the main meal. In China, jiaozi are sometimes served as a last course during restaurant meals. As a breakfast dish, jiaozi are prepared alongside xiaolongbao at inexpensive, roadside restaurants. Typically, they are served in small steamers containing ten pieces each. Although mainly consumed at breakfast, these small restaurants keep them hot on steamers, and ready to eat all day. These jiaozi/dumplings are eaten with a soy sauce-based dipping sauce that may include vinegar, garlic, ginger, rice wine, hot sauce, and sesame oil.
~Let’s Help One Another~
Any comments, suggestions, concerns regarding this post will be welcomed at [email protected]
Photographed, written, and posted by Windermere Sun-Susan Sun Nunamaker
More about the community at www.WindermereSun.com
Please also get into the habit of checking at these sites below for more on solar energy topics: