Let The SunShine In The Sunshine State-Floridians For Solar Choice! 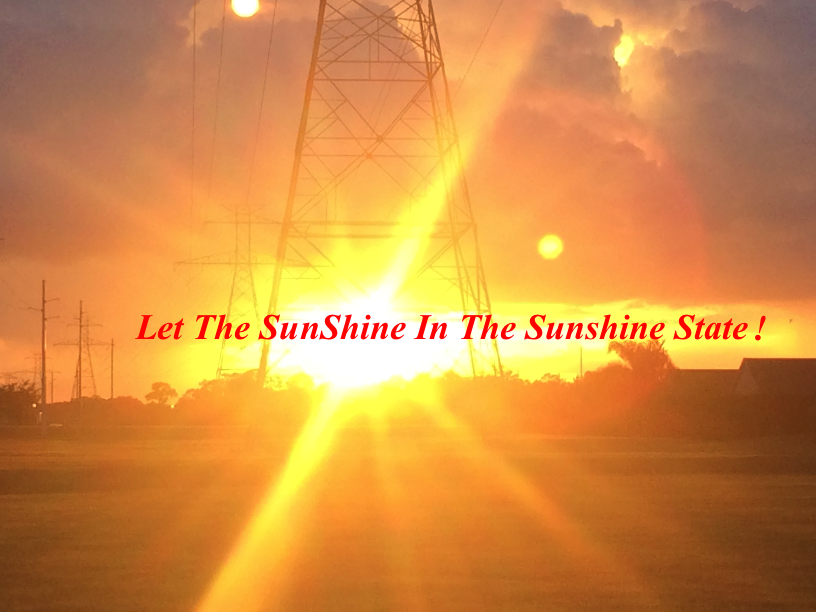 It is high time that we are getting some where here in Florida! Given our current political reality, this is great news. It is also wonderful to see our Florida state constitution being upheld and our Florida Supreme Court being impartial and truly has the welfare of Floridians in mind. The main reason it has even come to the measure of constitutional amendment is due to the first video clip below, addressed by Alexander Snitker.

This section is added to the original post because I’ve received some calls from various Floridians who are perplexed by all kinds of rhetoric generated by the mainstream media. To help clarify the reason why there is a need for Florida Supreme Court ruling to this Florida state amendment (Floridians for Solar Choice ballot), waiting to be passed, I am adding this “bold” section.

It is the natural course of event in human history when it is necessary for us to transition or evolve to the next stage. There would be resistance and  struggle. The status quo would want to maintain its original position and prevent the next stage to come to its fruition. In recent years, the cost of solar has dropped so much that it is now cost competitive to generate power using solar rather than the traditional coal. Even if the initial installation cost is still an issue for many Floridians, there are now third party power providers such as Solar City that would be able to help residents to take part in generating and using solar power without having to worry about installation cost.

People who are truly going to benefit from this Florida state amendment are those who have difficulty in affording the installation cost of solar.

So, we are observing the traditional utilities trying to put up barriers to allow third party power provider/generator from entering the market  because  allowing the third party power provider entering the market would mean less profit and doing away with the monopoly for the traditional utilities. Florida is one of only four states where current law expressly denies citizens and businesses the freedom to buy power directly from someone other than a monopoly electric utility or government-owned electric utility. Despite all obstacles, the Floridians For Solar Choice is gaining so much supporting signatures that the traditional utility is trying to put up barrier by using the argument that the Florida state amendment (Floridians for Solar Choice ballot) being introduced is confusing and ambiguous. So, it is up to the Florida State Supreme Court to have a look to decide whether it is ambiguous or confusing. And the decision has come in: Floridians for Solar Choice ballot initiative is unambiguous and single-subject, clearing the legal hurdle for the amendment to be placed on the 2016 election ballot if all 683,149 required signatures are collected and verified before February 1, 2016.

I hope the bold section has helped to cleared the fog and below is the press release I’ve received.

I’ve received the press release from Solar Choice Coalition in welcoming the Supreme Court Ruling in Efforts to Expand Solar in the Sunshine State. If you have any questions regarding this or want to show your support, please contact: Floridians for Solar Choice, 754-307-7451, jennifer@flsolarchoice.org

I would like to invite  you to click on Florida’s Supreme Court ruled today below and let me know what you think.

Fort Lauderdale, Fla. (October 22, 2015) – Florida’s Supreme Court ruled today that the language proposed by the Floridians for Solar Choice ballot initiative is unambiguous and single-subject, clearing the legal hurdle for the amendment to be placed on the 2016 election ballot if all 683,149 required signatures are collected and verified before February 1, 2016.

“We are thrilled with the high court’s ruling so that voters may have the opportunity to vote on removing a barrier that currently blocks Florida’s families and businesses from greater energy choices through the power of the free market,” said Tory Perfetti, Chairman, Floridians for Solar Choice. “People power is what will get us on the ballot, and we continue to gather thousands of signatures each week from Floridians eager for Solar Choice.”

The campaign’s total number of verified signatures continues to grow as more than 183,000 have been confirmed by Florida’s Division of Elections and another 100,000 are signed and awaiting verification. The ballot proposal – designed to expand solar choice by removing barriers that limit solar ownership models – continues to gain wide support as more than 60 businesses, associations, conservative groups, faith communities, clean energy and environmental organizations now comprise this diverse coalition.

“In this David and Goliath battle, we fully expected that the petition would upset the status-quo and generate opposition from utilities that hold Florida’s energy consumers captive, so we are pleased the court has cleared the way for this initiative to go before the people” said Pamela Goodman, President, League of Women Voters of Florida. “We are encouraged that an issue like solar choice has strong bipartisan support and is bringing people together for the chance to give Floridians a voice and a choice on solar power.”

Florida is one of only four states where current law expressly denies citizens and businesses the freedom to buy power directly from someone other than a monopoly electric utility or government-owned electric utility.

“Solar energy is a powerhouse economic contributor in many other states, so we are thrilled that Florida may finally have a chance to catch up with the rest of the country,” said Mike Antheil, Executive Director, Florida Solar Energy Industries Association. “The solar industry in Florida is made up of small businesses, just like many other kinds of local contractors. We employ real Floridians and provide for real families. Solar energy is here to stay. Allowing consumers to choose solar power will create local jobs and keep our energy dollars right here in Florida.”

“This is a huge victory for the people and businesses of Florida who want to freely choose the companies that will provide them clean solar power in a cost effective manner,” said Dr. Stephen Smith, Executive Director, Southern Alliance for Clean Energy. “The big monopoly utilities, led by Florida Power & Light (FPL), called in political favors from the Attorney General and other minions in an effort to block the free market and they failed. We fully expect more misleading attacks from the big electric utilities and their proxy front groups in their desperate attempt to limit customer choice. In America, we value competition and the freedom of choice. FPL and other electric utilities need to stop limiting our freedom in the Sunshine State.”


2. Supporters of Floridians For Solar Choice
3. Rev. Andy
4. Daisy Baez But keep in mind that many more signatures are needed (683, 149 signatures in total are required and so far 183,000 have been confirmed and 100,00 are waiting verification…meaning more than 400,000 signatures are still needed before Feb. 1, 2016) before this proposed Florida state amendment can be placed on the 2016 Ballot. So, if you are in favor of this ballot initiative, please click on Floridians For Solar Choice and sign the petition.
~Let’s Help One Another~
Any comments, suggestions, concerns regarding this post will be welcomed at info.WindermereSun@gmail.com
Gathered, written, and posted by Windermere Sun-Susan Sun Nunamaker
More about the community at www.WindermereSun.com
Please also get into the habit of checking at these sites below for more on solar energy topics: