Wouldn’t it be great if Disney-Epcot would consider this project-Solar Bike Path or Solar Walk Way as what the Dutch have done, below, reposted from our sister publication, www.sunisthefuture.net . 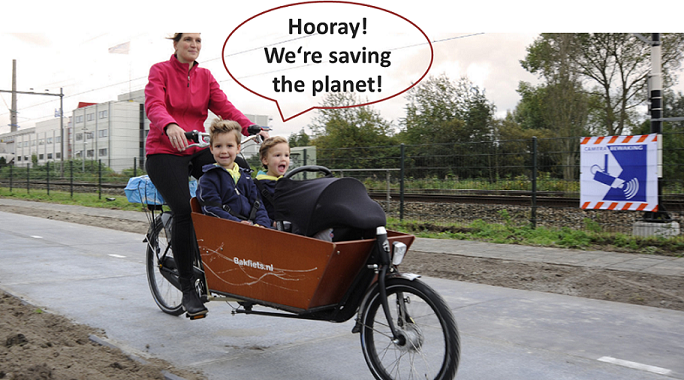 Solar Bike Path of Netherlands, first in the world, being installed in Nov. of 2014 (credit: notrickszone.com.)

My associations with people from Netherlands have always been extremely positive, enthusiastic, optimistically ambitious. So, it was not surprising that during Nov. of 2014 the Dutch (people from Netherlands) developed the first Solar Bike Path (with embedded solar cells) in the world, outside Amsterdam connecting the suburbs of Krommenie and Wormerveer! This Dutch project integrated solar panels into a bike commuter path to generate power to be funneled into the national energy grid.  The crystalline silicone solar cells are encased in two layers of tempered safety glass, mounted in a concrete housing. 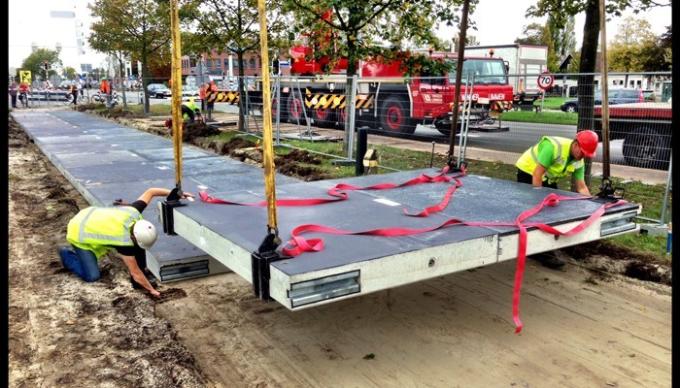 Solar Bikepath of Netherland, first in the world, being installed in Nov. of 2014 (credit: npr.org)

According to SolaRoad, it’s been a challenge to produce energy-producing slabs that are both durable and rideable by thousands of cyclists per day. “It has to be translucent for sunlight and repel dirt as much as possible,” the company says. “At the same time, the top layer must be skid resistant and strong enough in order to realize a safe road surface.” This $3.7 million project is a collaboration between the research group TNO and the government of North Holland. Its technical aspects may be found in Phys Org site. 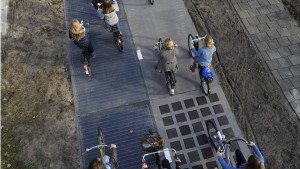 Active Solar Bike Path of Netherland, first in the world, installed in Nov. of 2014 (credit: pri.org)

This 70-meter or 230 feet (over two-third of the length of an NFL football field) section solar bike path is flat instead of angled to optimally take advantage of the sun, therefore the path’s panel will produce about 70% of what similar panel might produce on a rooftop.  With approximately 87,000 miles of roadways, Netherlands’s total road surface area is much larger than that of rooftops.

This project is the first step that the local government hopes will extend to 100 meter (or 328 feet) by 2016. Now that it’s been half year into the installation of the solar bike path, it’s become clear that the solar panels are outperforming expectations, having already generated 3,000 kilowatt-hours (kWh) of electricity. This is fantastic! In a space that previously generated no clean electricity, now it is functioning well and ready for further development and expansion. I have no doubt that the cost and overall efficiency of any solar roadway will continue to improve as more and more visionaries collaborate to enable such Clean Solar Renewable Dream of Solar Roadway to become a reality. Our hats off to the visionaries in Netherlands!

Another solar bike path later unveiled in the same month, but in the city of Eindhoven, Netherland, of the passive solar form, is inspired by Van Gogh’s “Starry Night”, below: 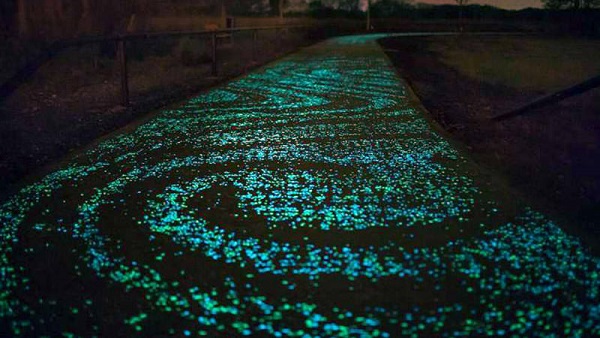 (Be sure to view the whole  video below, “Visions of Public Art: by Daan Roosegaarde”….you won’t regret it….)


Of course, it is the Dutch who would embrace a challenge by innovating first, by being efficient, in being artistic while pragmatic and remaining connected to both the past and the future……look at the Solar Bike Path at night, an inspiration by Van Gogh’s “Starry Night”. 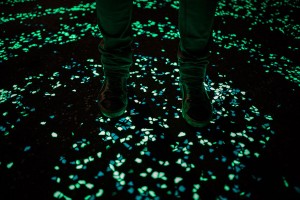 Our future would be simply breath-takingly beautiful, if we don’t destroy our planet first…there lies the beauty of Solar Energy…for it is the answer to Energy-Pollution-Economic Prosperity-International Conflicts. SO, LET’S USE IT !

As long as we’re on the subject of solar roadway, let me remind you of the Indiegogo campaign here at sunisthefuture.net for Scott & Julie Brusaw of Idaho, asking for $1 million but ended up raising more than $2.2 million for their Solar Roadway R & D project. Yes, it is exciting to live in a world where dreamers and visionaries are in many places!