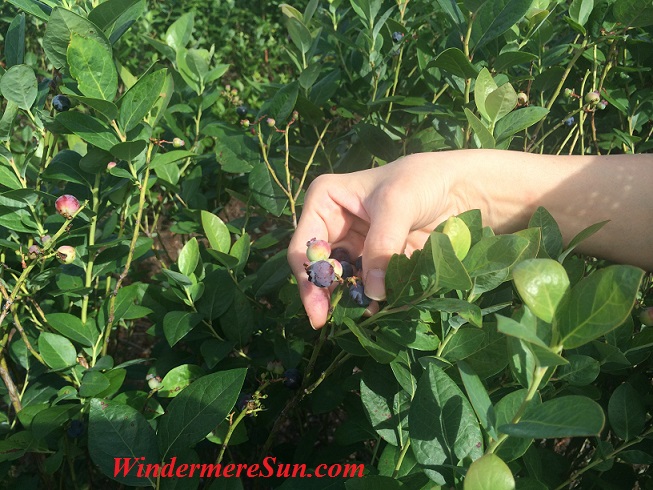 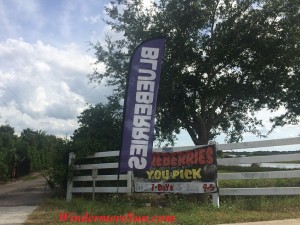 They were originally open for picking until May 16, 2015. But I just read in Beck Brothers Citrus Inc. Facebook page that Friday may be the last day for this season. So be sure to confirm with them by calling in advance at 407-656-4353 or email beckblueberries11@gmail.com . Hubby and I had so much fun picking (and tasting) blueberries while soaking up the sun on Wednesday afternoon that we’d like to share these photos below with you: 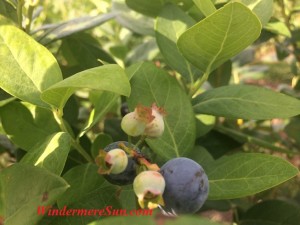 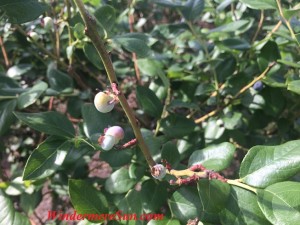 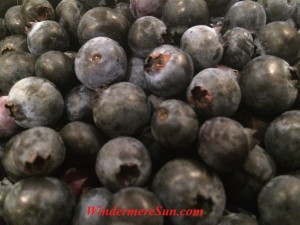 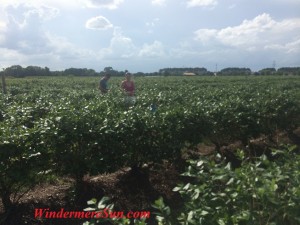 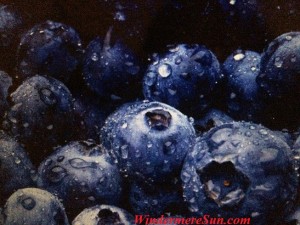 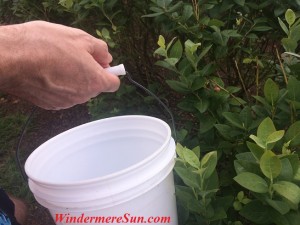 The leaves can be either deciduous or evergreen, ovate to lanceolate, and 1–8 cm (0.39–3.15 in) long and 0.5–3.5 cm (0.20–1.38 in) broad. The flowers are bell-shaped, white, pale pink or red, sometimes tinged greenish. The fruit is a  5–16 millimeters (0.20–0.63 in) in diameter with a flared crown at the end; they are pale greenish at first, then reddish-purple, and finally dark purple when ripe. They are covered in a protective coating of powdery epicuticular wax, colloquially known as the “bloom”. They have a sweet taste when mature, with variable acidity. Blueberry bushes typically bear fruit in the middle of the growing season: fruiting times are affected by local conditions such as altitude and latitude, so the peak of the crop can vary from May to August (in the northern hemisphere) depending upon these conditions.

The blueberry harvest in North America varies. It can start as early as May and usually ends in late summer. The principal areas of production in the Southern Hemisphere (Australia, Chile, New Zealand and Argentina) have long periods of harvest. In Australia, for example, due to the geographic spread of blueberry farms and the development of new cultivation techniques, the industry is able to provide fresh blueberries for 10 months of the year – from July through to April. Similar to other fruits and vegetables, climate-controlled storage allows growers to preserve picked blueberries. Harvest in the UK is from June to August. Mexico also can harvest from October to February.

Although blueberries were traditionally hand-picked, modern farmers use machine harvesters that shake the fruit off the bush of cultivated highbush blueberries, while new machines are being developed for wild, lowbush blueberries. The fruit is then brought to a cleaning/packaging facility where it is cleaned, packaged, then sold. In Mexico, each farmer packs on site and sells directly, or may transport to a warehouse for storage until the berries are sold.

Blueberries contain micronutrients mostly in negligible amounts, with moderate levels (relative to respectiveDaily Values) (DV) of the essential dietary mineral manganese, vitamin C, vitamin K and dietary fiber(table). Generally, nutrient contents of blueberries are a low percentage of the DV (table). One serving provides a relatively low caloric value of 57 kcal per 100 g serving and glycemic load score of 6 out of 100 per day.

Blueberries also contain methylparaben, where it acts in the plant as an antimicrobial agent which may have pesticide effects against fruit flies.


Gathered, written, and posted by Windermere Sun-Susan Sun Nunamaker
Any comments, concerns, or suggestions will be welcomed at info.WindermereSun@gmail.com

Please also get in the habit of also visiting our sister publications for more on solar energy, below:
www.sunisthefuture.net