Thank You, Nellie Bly, For Taking The Field of Journalism To A New Height 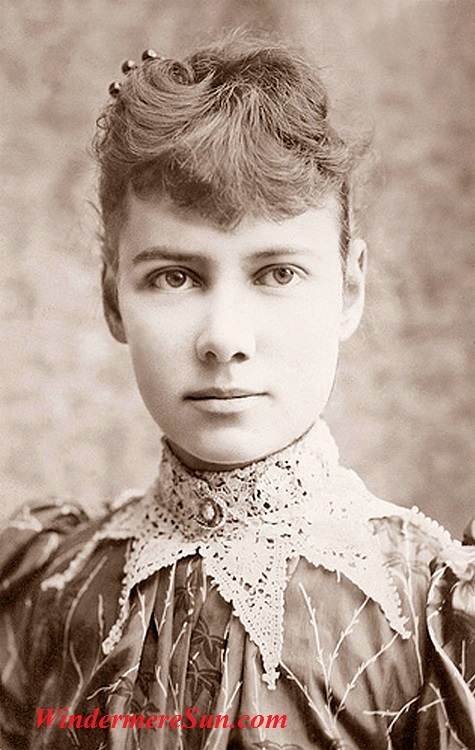 Did you click on the video at Google Doodle today?

I did…. and found out a lot more about Nellie Bly (the pen name of American journalist Elizabeth Cochrane Seaman), the early journalist who was a crusader for the truth, a writer, industrialist, inventor, and a charity worker who was widely known for her record-breaking trip around the world in 72 days, in emulation of Jules Verne‘s fictional character Phileas Fogg, and an exposé in which she faked insanity to study a mental institution from within She was a pioneer in her field, and launched a new kind of investigative journalism.   In 1880 Cochrane and her family moved to Pittsburgh. An aggressively misogynistic column entitled “What Girls Are Good For” in the Pittsburgh Dispatch prompted her to write a fiery rebuttal to the editor under the pseudonym “Lonely Orphan Girl”. The editor, George Madden, was impressed with her passion and ran an advertisement asking the author to identify herself. When Cochrane introduced herself to the editor, he offered her the opportunity to write a piece for the newspaper, again under the pseudonym “Lonely Orphan Girl”. After her first article for the Dispatch, entitled “The Girl Puzzle”, Madden was impressed again and offered her a full-time job. Women who were newspaper writers at that time customarily used pen names. The editor chose “Nellie Bly”, adopted from the title character in the popular song “Nelly Bly” by Stephen Foster. Cochrane originally intended that her pseudonym be “Nelly Bly,” but her editor wrote “Nellie” by mistake and the error stuck.

As a writer, Bly focused her early work for the Dispatch on the plight of working women, writing a series of investigative articles on women who were factory workers, 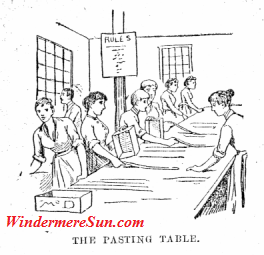 but editorial pressure pushed her to the so-called “women’s pages“ to cover fashion, society, and gardening, the usual role for women journalists of the day. Dissatisfied with these duties, she took the initiative and traveled to Mexico to serve as a foreign correspondent. Still only 21, she spent nearly half a year reporting the lives and customs of the Mexican people; her dispatches later were published in book form as Six Months in Mexico. In one report, she protested the imprisonment of a local journalist for criticizing the Mexican government, then a dictatorship under Porfirio Díaz. When Mexican authorities learned of Bly’s report, they threatened her with arrest, prompting her to leave the country. Safely home, she denounced Díaz as a tyrannical czar suppressing the Mexican people and controlling the press.

Burdened again with theater and arts reporting, Bly left the Pittsburgh Dispatch in 1887 for New York City. Penniless after four months, she talked her way into the offices of Joseph Pulitzer‘s newspaper, the New York World, and took an undercover assignment for which she agreed to feign insanity to investigate reports of brutality and neglect at the Women’s Lunatic Asylum on Blackwell’s Island.

After a night of practicing deranged expressions in front of a mirror, she checked into a boardinghouse. She refused to go to bed, telling the boarders that she was afraid of them and that they looked “crazy”. They soon decided that she was “crazy”, and the next morning summoned the police. Taken to a courtroom, she pretended to have amnesia. The judge concluded she had been drugged.

Several doctors then examined her; all declared her insane. “Positively demented,” said one, “I consider it a hopeless case. She needs to be put where someone will take care of her.” The head of the insane pavilion at Bellevue Hospital pronounced her “undoubtedly insane”. The case of the “pretty crazy girl” attracted media attention: “Who Is This Insane Girl?” asked the New York Sun. The New York Times wrote of the “mysterious waif” with the “wild, hunted look in her eyes” and her desperate cry: “I can’t remember I can’t remember.”

Committed to the asylum, Bly experienced its conditions firsthand. The food consisted of gruel broth, spoiled beef, bread that was little more than dried dough, and dirty undrinkable water. The dangerous patients were tied together with ropes. The patients were made to sit for much of each day on hard benches with scant protection from the cold. Waste was all around the eating places. Rats crawled all around the hospital. The bathwater was frigid and buckets of it were poured over their heads. The nurses behaved obnoxiously and abusively, telling the patients to shut up, and beating them if they did not. Speaking with her fellow patients, Bly was convinced that some were as sane as she was. On the effect of her experiences, she wrote:

What, excepting torture, would produce insanity quicker than this treatment? Here is a class of women sent to be cured. I would like the expert physicians who are condemning me for my action, which has proven their ability, to take a perfectly sane and healthy woman, shut her up and make her sit from 6 a.m. until 8 p.m. on straight-back benches, do not allow her to talk or move during these hours, give her no reading and let her know nothing of the world or its doings, give her bad food and harsh treatment, and see how long it will take to make her insane. Two months would make her a mental and physical wreck.

…My teeth chattered and my limbs were …numb with cold. Suddenly, I got three buckets of ice-cold water…one in my eyes, nose and mouth.

After ten days the asylum released Bly at The World’s behest. Her report, later published in book form as Ten Days in a Mad-House, caused a sensation and brought her lasting fame. While embarrassed physicians and staff fumbled to explain how she had deceived so many professionals, a grand jury launched its own investigation into conditions at the asylum, inviting Bly to assist. The jury’s report recommended the changes she had proposed. Its call for increased funds for care of the insane prompted an $850,000 increase in the budget of the Department of Public Charities and Corrections. The Grand Jury also made sure that future examinations were more thorough so that only the seriously ill went to the asylum.

In 1888 Bly suggested to her editor at the New York World that she take a trip around the world, attempting to turn the fictional Around the World in Eighty Days into fact for the first time. A year later, at 9:40 a.m. on November 14, 1889, and with two days’ notice, she boarded the Augusta Victoria, a steamer of the Hamburg America Line,and began her 24,899-mile journey. She took with her the dress she was wearing, a sturdy overcoat, several changes of underwear, and a small travel bag carrying her toiletry essentials. 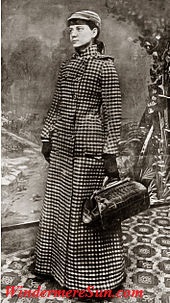 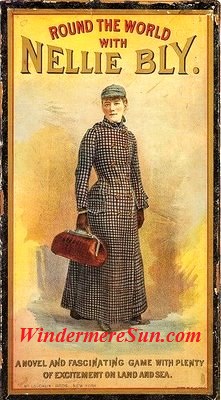 She carried most of her money (£200 in English bank notes and gold, as well as some American currency) in a bag tied around her neck.

The New York newspaper Cosmopolitan sponsored its own reporter, Elizabeth Bisland, to beat the time of both Phileas Fogg and Bly. Bisland would travel the opposite way around the world. To sustain interest in the story, the World organized a “Nellie Bly Guessing Match” in which readers were asked to estimate Bly’s arrival time to the second, with the Grand Prize consisting at first of a free trip to Europe and, later on, spending money for the trip.

During her travels around the world, Bly went through England, France (where she met Jules Verne in Amiens), Brindisi, the Suez Canal, Colombo (Sri Lanka), the Straits Settlements of Penang and Singapore, Hong Kong, and Japan. The development of efficient submarine cable networks and the electric telegraph allowed Bly to send short progress reports, although longer dispatches had to travel by regular post and, thus, often were delayed by several weeks.

Bly travelled using steamships and the existing railroad systems, which caused occasional setbacks, particularly on the Asian leg of her race. During these stops, she visited a leper colony in China and, in Singapore, she bought a monkey.

As a result of rough weather on her Pacific crossing, she arrived in San Francisco on the White Star Line ship Oceanic on January 21, two days behind schedule. However, after World owner Pulitzer chartered a private train to bring her home, she arrived back in New Jersey on January 25, 1890, at 3:51 p.m. 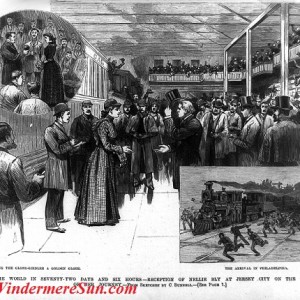 Just over seventy-two days after her departure from Hoboken, Bly was back in New York. She had circumnavigated the globe, traveling alone for almost the entire journey. Bisland was, at the time, still crossing the Atlantic, only to arrive in New York four and a half days later. She also had missed a connection and had had to board a slow, old ship (the Bothnia) in the place of a fast ship (Etruria). Bly’s journey was a world record, although it was bettered a few months later by George Francis Train, who completed the journey in 67 days. By 1913, Andre Jaeger-Schmidt, Henry Frederick, and John Henry Mears had improved on the record, the latter completing the journey in fewer than 36 days.

To thank Nellie Bly for her tenacity, integrity, and creativity in her contribution to the field of journalism, we celebrate her birthday, May 5, with this post, here at Windermere Sun.


Gathered, and posted by Windermere Sun-Susan Sun Nunamaker
Any comments, concerns, or suggestions will be welcomed at [email protected]
www.sunisthefuture.net