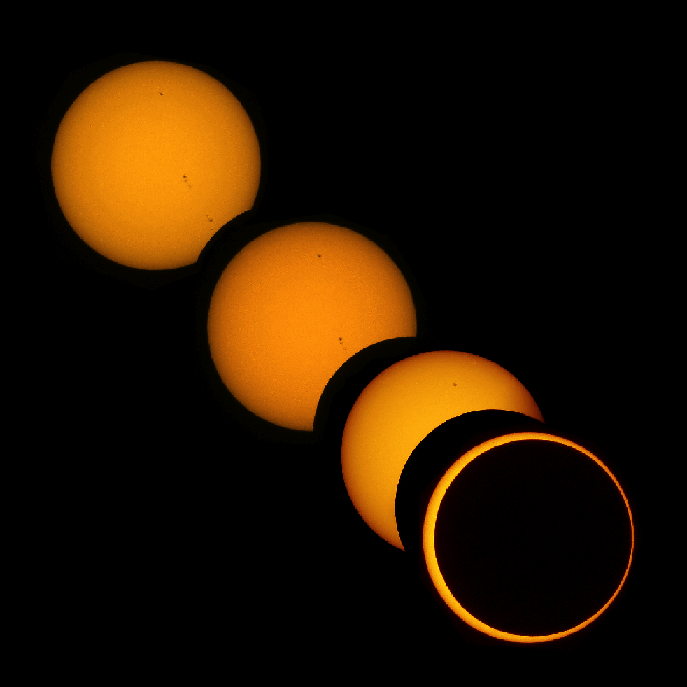 Historical records have shown that solar eclipses were viewed as omens that brings about death and destructions. Therefore, it is understandable that many ancient civilizations tried to understand and predict this celestial phenomenon. Babylonians and ancient Chinese were able to predict solar eclipses as early as 2500 B.C. The word eclipse comes from ekleipsis, the ancient Greek word for being abandoned. The Chinese legend has it that two astrologers, Hsi and Ho, were executed for failing to predict the solar eclipse of Oct. 22, 2134 B.C.E. (because solar eclipse is associated with the health and success of the Emperor and not predicting one means placing the Emperor in danger). Henceforth, the solar eclipse of Oct. 22, 2134, B.C.E. was the oldest solar eclipse ever recorded in human history. Babylonians, also believing in the omens associated with solar eclipse, would seat substitute kings during solar eclipses so that these temporary kings would face the anger of the Gods instead of the real king. On the other hand, a solar eclipse in 585 B.C.E stopped the war between the Lydians and Medes, who saw the dark skies as a sign to make peace with each other.

As seen from the Earth, a solar eclipse is a type of eclipse that occurs when the Moon passes between the Sun and Earth, and the Moon fully or partially blocks (“occults“) the Sun. This can happen only at new moon, when the Sun and the Moon are in conjunction as seen from Earth in an alignment referred to as syzygy. In a total eclipse, the disk of the Sun is fully obscured by the Moon. In partial and annular eclipses, only part of the Sun is obscured. 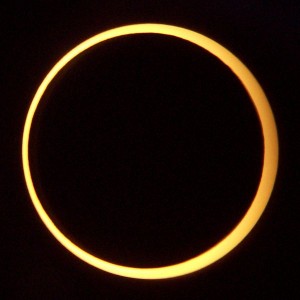 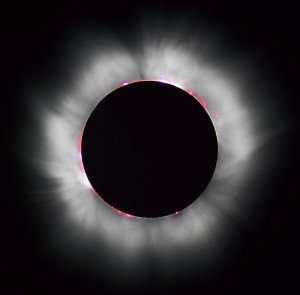 If the Moon were in a perfectly circular orbit, a little closer to the Earth, and in the same orbital plane, there would be total solar eclipses every single month. However, the Moon’s orbit is inclined (tilted) at more than 5 degrees to the Earth’s orbit around the Sun (see ecliptic), so its shadow at new moon usually misses Earth. Earth’s orbit is called the ecliptic plane as the Moon’s orbit must cross this plane in order for an eclipse (both solar as well as lunar) to occur. In addition, the Moon’s actual orbit is elliptical, often taking it far enough away from Earth that its apparent size is not large enough to block the Sun totally. The orbital planes cross each other at a line of nodes resulting in at least two, and up to five, solar eclipses occurring each year; no more than two of which can be total eclipses. However, total solar eclipses are rare at any particular location because totality exists only along a narrow path on the Earth’s surface traced by the Moon’s shadow or umbra.

Since looking directly at the Sun can lead to permanent eye damage or blindness (unless the UV index is between 0 to 1), special eye protection or indirect viewing techniques are used when viewing a solar eclipse. It is technically safe to view only the total phase of a total solar eclipse with the unaided eye and without protection; however, this is a dangerous practice, as most people are not trained to recognize the phases of an eclipse, which can span over two hours while the total phase can only last up to 7.5 minutes for any one location. People referred to as eclipse chasers or umbraphiles will travel to remote locations to observe or witness predicted central solar eclipses.

There are four types of solar eclipses:

The diagrams to the right below shows the alignment of the Sun, Moon and Earth during a solar eclipse. 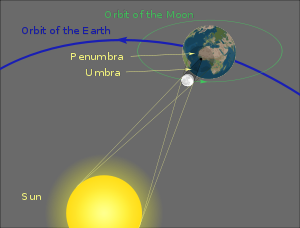 Geometry of a Total Solar Eclipse

The dark gray region between the Moon and Earth is the umbra, where the Sun is completely obscured by the Moon. The small area where the umbra touches Earth’s surface is where a total eclipse can be seen. The larger light gray area is the penumbra, in which a partial eclipse can be seen. An observer in the antumbra, the area of shadow beyond the umbra, will see an annular eclipse.

(some parts are taken from wikipedia)

Any of your comments or suggestions will be welcomed via [email protected]“”.

Please also get into the habit of checking at these sites (one of our sister online publications) below for more on solar energy topics: www.sunisthefuture.net