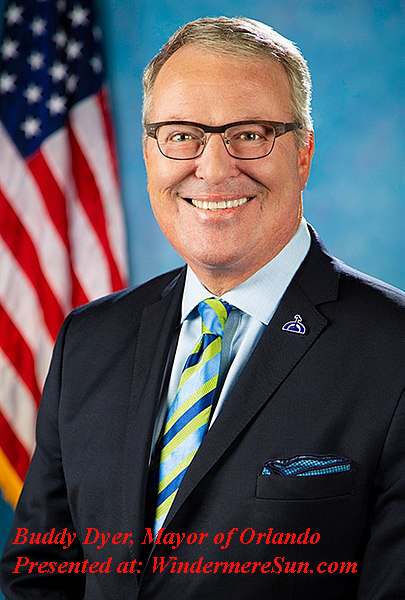 Buddy Dyer, Mayor of City of Orlando, 2018 (Presented at: WindermereSun.com)

Groups of people continued mostly peaceful demonstration in streets of Orlando today, June 4, 2020. Since the charge on Derek Chauvin and three other officers had been upgraded (Derek Chauvin is now charged with 2nd degree murder rather than the previous 3rd degree murder, and three other officers are now charged with aiding and abetting), in addition to the curfew from night before, local protests stayed mostly calm and peaceful. There had been about ninety arrests associated with the protest during the past four days in Orlando and Orange County. Some weapons were discovered around police headquarters before the arrival of protesters. Orlando Mayor Buddy Dyer announced a downtown curfew that is now 2 hours earlier than before, starting from 8:00 pm to 5:00 am. and citywide curfew remains from 10:00 pm to 5:00 am., and coverage of protests in New York City and Detroit are also seen in the video “Protests over George Floyd’s death continue in Orlando, across US“, below:

People from different racial backgrounds have come together to demand justice for George Floyd, and they have succeeded, in upgrading the charge for Derek Chauvin from 3rd degree murder to 2nd degree murder, and other three police officers also being charged with aiding and abetting. These nationwide protests have led to discussions for ways to improve police training, how force should be used, and ways in achieving better relationship between police and local residents. In all of these nationwide protests, there may be one or two people, often from outside of the community, trying to create commotions either by throwing bottle, vandalize property at night, or placing weapons in inappropriate locations to instigate problems. In most cases, other peaceful protesters had been able to subdue negative outside influence during day time. That is why Orange County officials of Florida called for curfew at night, so to be able to easily prevent night-time vandalism by those who are not true protesters.

In California, the American Civil Liberties Union filed suit on Wednesday, June 3, 2020, against the cities of Los Angeles and San Bernardino and L.A. county to end the curfews. According to Los Angeles County Supervisor Janice Hahn, the curfews may have been warranted on Sunday (May 31, 2020)  and Monday (June 1, 2020) nights, “now it seems like they are being used to arrest peaceful protesters.”  One would imagine that the curfew will no longer be needed soon. Now that the perpetrator of George Floyd’s life is more appropriately charged, protesters will soon be going home or be finding their time better spent in other directions to improve justice.