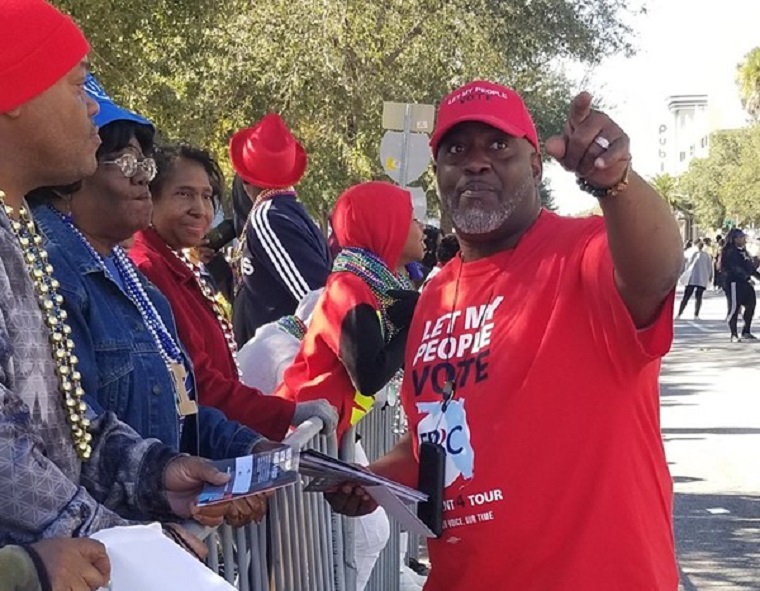 In May of 2019, the Florida state legislature passed a bill (SB 7066) restricting voting rights restoration only to felons who had paid off all outstanding restitution, fines, and court fees. In October of 2019, a federal judge ruled that the state could require felons who could afford conviction-related financial obligations to pay up, but could not make a law blocking those who cannot afford to pay from voting. Governor Ron DeSantis has asked the Florida Supreme Court for an opinion on the pay-to-play legislation and has begun speaking of voting as a “privilege”. Last Thursday, January 16, 2020, Florida Supreme Court ruled that only felons who have completed their prison terms and have satisfied their LFOs (legal financial obligations) are or will be eligible to vote.

The court wrote, “The answer to the Governor’s question largely turns on whether ‘all terms of sentence’ encompasses all obligations or only durational periods. We conclude that the phrase, when read and understood in context, plainly refers to obligations and includes ‘all’ – not some – LFOs imposed in conjunction with an adjudication of guilt.”

While advocates for restoring the voting rights interpret “all terms of their sentence” as the duration of their prison sentences alone, without including the payments for court-imposed fines, restitution, or other legal fees, the opposing side interprets LFOs as being included in “all terms of their sentence”. The advocates for restoring the voting rights have sued the state in federal court immediately after Florida Governor Ron DeSantis signed SB7066 bill into law , but a trial is not expected until Spring. And the resolution may not be reached until after the 2020 election.

Various State attorneys for Hillsborough, Broward, Miami-Dade, and Palm Beach, some of Florida’s most populous counties, created “rocket dockets” to find and waive felon fees (except for victim restitution). County judges would replace fines with community service, therefore clearing ex-felons’ debt and fast-tracking their ability to vote. But there has been no such movement in Orange and Osceola counties. According to Orange County Supervisor of Election Bill Cowles and Osceola County Supervisor of Election Mary Jane Arrington, there had not been many questions nor confusions among ex-felons who have registered to vote from these two counties. But Osceola County registration form had added a new box since the passing of Amendment 4, requiring declaration whether the registered voter is an ex-felon.

For more about 2018 Florida Amendment 4, please refer to the excerpt from wikipedia, in italics, below:

Florida Amendment 4, also the Voting Rights Restoration for Felons Initiative, is an amendment to the Constitution of Florida passed by ballot initiative on November 6, 2018, as part of the 2018 Florida elections. The proposition restored the voting rights of Floridians with felony convictions after they complete all terms of their sentence including parole or probation.[1][2][3][4] The amendment does not apply to Floridians convicted of murder or sexual offenses.

The campaign was sponsored by the Florida Rights Restoration Coalition and had support from the American Civil Liberties Union, Christian Coalition of America, and Freedom Partners. Among politicians who took a side on the amendment, several Democrats supported the measure, while some Republicans opposed it. Amendment 4 passed with 64.55% of voters in favor. On January 8, 2019, an estimated 1.4 million ex-felons became eligible to vote.[5]

In 2016, 6.1 million adults in the United States could not vote due to felony disenfranchisement laws.[6] In 2018, Florida was one of four U.S. states that enacted permanent felony disenfranchisement, affecting 1.7 million felons.[7] Felons must wait five to seven years after the completion of their sentence before they can apply to have their voting rights restored by the State Board of Executive Clemency, which is composed of the Governor of Florida and the Florida Cabinet, and meets four times per year at the Florida State Capitol in Tallahassee, Florida.[8] Florida’s disenfranchised felons constituted 10% of the adult population, and 21.5% of the adult African American population.[9]

As Governor of Florida, Charlie Crist reformed the process for the reinstatement of voting rights in 2007, allowing non-violent offenders to have their voting rights automatically restored.[10] Over 155,000 applications for voting right restoration were approved during Crist’s four-year term.[8] Shortly after succeeding Crist as governor, Rick Scott, with the advice of Florida Attorney General Pam Bondi, ended the automatic restoration for felons convicted of non-violent crimes in the state and instituted a mandatory five-year wait period before felons could apply to the State Board of Executive Clemency for restoration of voting rights.[10][11][12] During the first seven years of Rick Scott‘s tenure, 3,000 applications were approved.[8]

Seven former felons filed a lawsuit against the state of Florida in the United States District Court for the Northern District of Florida in March 2017. The plaintiffs in the case, Hand v. Scott, alleged the process is unconstitutional due to its arbitrary nature.[13][14] In April 2018, U.S. District Judge Mark E. Walker ruled that Florida’s process for seeking restoration of voting rights in Florida was unconstitutional because it relied too much on personal appeal to Governor Scott.[15] The state appealed to the United States Court of Appeals for the Eleventh Circuit,[16] which stayed Walker’s ruling pending appeal.[17] An analysis conducted by The Palm Beach Post demonstrated that Scott discriminated against African Americans in re-enfranchisement hearings and favored Republicans.[18]

Desmond Meade, who was convicted of a felony and earned a law degree after his release, became involved in voting rights after his wife ran for the Florida Legislature and he could not vote for her. He became the head of the Florida Rights Restoration Coalition in 2009. He led a signature drive to qualify Amendment 4 as a ballot initiative for the 2018 Florida elections, collecting 799,000. The initiative was approved in January 2018 for the November ballot.[19] The amendment required 60% of the vote to take effect.[20]

Demetrius Jifunza became an outspoken advocate for Amendment 4[21] and involved in voting rights after his voting rights were stripped in 1995 due to a felony conviction. He went on to become a paralegal. Jifunza founded the Sarasota Chapter of the Florida Rights Restoration Coalition and is the Vice President, Sarasota, Florida Chapter NAACP and lead the successful media campaign to help pass Amendment 4[22].

The FRRC partnered with the American Civil Liberties Union and the Christian Coalition of America during the campaign.[20] Freedom Partners, a nonprofit group funded in part by the Koch brothers, also supported the amendment.[23] Some Democratic Party politicians, including Crist, Andrew Gillum, Gwen Graham, Al Lawson, and Alan Williams supported Amendment 4, while some Republican politicians, including Ron DeSantis, Adam Putnam, and Richard Corcoran, opposed it.[24][25][26][27]

The full text of the constitutional amendment was available to voters in a booklet provided by the Florida Division of Elections.[30] A 60 percent vote in favor was required for approval.

The amendment went into effect on January 8, 2019, making an estimated 1.4 million people with felony convictions eligible to register to vote.[5]

Some proponents[who?] claim that Amendment 4 was written as to not require implementation by the Florida Legislature. The Florida Division of Elections stopped running applicants through the criminal database in December.[31] DeSantis, who defeated Gillum in the 2018 Florida gubernatorial election, stated his belief that the legislature must pass a law to allow the Division of Elections to verify the eligibility of each applicant.[32] Bill Galvano, the president of the Florida Senate, is of the opinion that it is “self-executing”.[33] Dennis Baxley, who chairs the state senate’s committee on ethics and election, filed a bill in the legislature to increase the required threshold to amend the constitution from 60% to two-thirds.[34] However, by mid-2019 Republican Governor DeSantis signed a bill into law which originated in the Florida Senate, SB 7066, which required that “people with felony records pay ‘all fines and fees’ associated with their sentence prior to the restoration of their voting rights”. According to one commentator, this legislation “subverts” Amendment 4.[35]