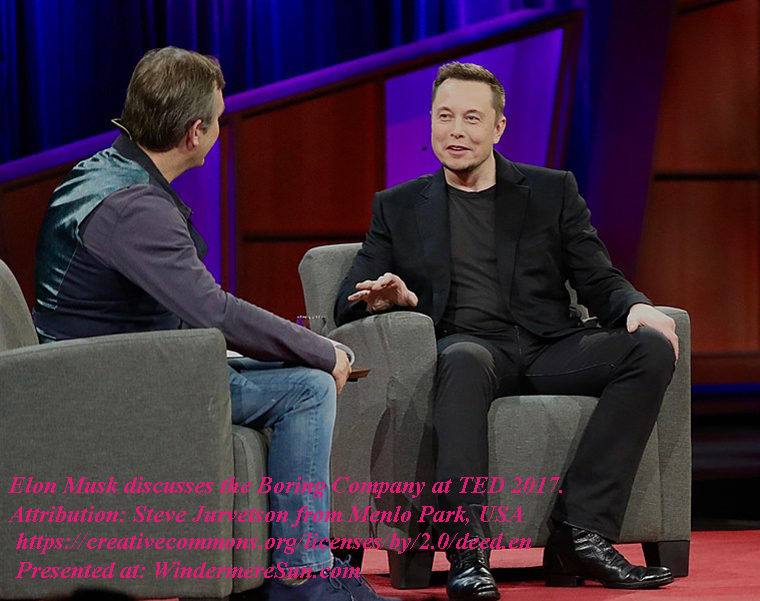 Excerpt from wikipedia about The Boring Company, in italics, below:

In March 2019, the Las Vegas Convention and Visitors Authority (LVCVA) recommended the Boring Company for a system to shuttle visitors around the Las Vegas Convention Center ( LVCC) , to be completed by 2021, with the potential for future expansion along the Strip and to Allegiant Stadium and McCarran International Airport. In May 2019, the company won a $48.7 million project to shuttle people underneath Las Vegas. In September, on-site preparations for the tunnel project were reported, construction started in October. Boring of the first tunnel began on November 15 and is expected to be complete by March 2020, after which the boring machine will be returned to its start point to drill the second tunnel. Maximum boring speeds are expected to reach 100 ft (30 m) per day. On December 27, 2019, Musk tweeted that the first tunnel is being completed, hoping it would be operational in 2020.

The Boring Company (also known as TBC)[3][4] is an infrastructure and tunnel construction services company founded by Elon Musk in December 2016. Musk has cited difficulty with Los Angeles traffic and limitations with the current 2-D transportation network as inspiration for the project.[4][5] The Boring Company was initially formed in 2017 as a subsidiary of SpaceX, becoming a separate and fully independent company in 2018. As of December 2018, 90% of the equity was owned by Musk,[6] with 6% held by SpaceX as return for the use of SpaceX resources during the initial startup of the company.[7] Outside investments during 2019 have changed the equity split.

The soon-to-be underground people mover at the Las Vegas Convention Center is now almost six football fields long, according to a construction update from the Las Vegas Convention and Visitors Authority (LVCVA). Tunneling for the project began in November, 2019. It’s now almost halfway done, the LVCVA says, in the video “FIRST LOOK: Boring Company’s underground people mover in Las Vegas coming along“, below:

Elon Musk tweeted he is aiming for the Boring company’s commercial tunnel in Las Vegas to “hopefully” be fully operational in 2020. Yahoo Finance’s Seana Smith discusses with Julia La Roche and Dan Howley on The Ticker, in the video “Elon Musk tweets Boring Las Vegas tunnel will be completed in 2020“, below:

Let’s look back and find the inspiration for Elon Musk to start The Boring Company:

Elon Musk discusses his new project digging tunnels under LA, the latest from Tesla and SpaceX and his motivation for building a future on Mars in conversation with TED’s Head Curator, Chris Anderson, in the video “The future we’re building- and boring, Elon Musk“, below:

About ten months ago, CNBC’s Contessa Brewer reports on Elon Musk’s Boring Company and its proposal to build an underground tunnel to connect Las Vegas’ strip as well as potentially Las Vegas to Los Angeles, in the video “Boring Company proposes tunnel in Las Vegas“, below:

The “Squawk Box” news team discusses some of the morning’s most provocative headlines, in the video “Elon Musk’s Boring Company proposes tunnel project in Las Vegas“, below:

I am a mother/wife/daughter, math professor, solar advocate, world traveler, yogi, artist, photographer, sharer of knowledge/information, and resident of Windermere, FL. I've worked professionally in applied math, engineering, medical research, and as a university math professor in IL and FL for about 20 years. My husband and I loved Disney and moved down to Central Florida initially as snowbirds. But we've come to love the warmth and friendly people offered by this community and decided to move down to Windermere, FL full time in 2006. I am now spending time sharing information/ knowledge online, promoting understanding of math and solar energy (via http://www.sunisthefuture.net ), and developing Windermere Sun (http://www.WindermereSun.com) as an online publication, sharing and promoting Community ABC's (Activities-Businesses-Collaborations) for healthier/happier/more sustainable living. In the following posts, I'll be sharing with you some of the reasons why Windermere has attracted us to become full-time residents of Central Florida region. Please feel free to leave your comments via email at "Contact Us" in the topbar above or via [email protected]l.com. ~Let's help one another~ Windermere Sun-Susan Sun Nunamaker Founder/Owner/Editor/Producer of Windermere Sun email: [email protected] Twitter: @WindermereSun