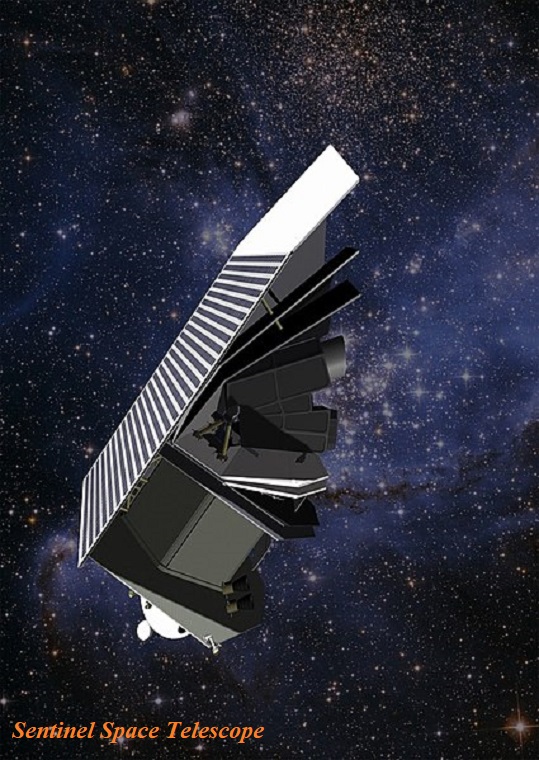 Sentinel Space Telescope, being built by the B612 Foundation (Attribution: B612Julie, https://creativecommons.org/licenses/by-sa/4.0/deed.en, Presented at: WindermereSun.com)

Of all of the Democratic presidential candidates, there is only one candidate, Andrew Yang, who is addressing the issue regarding the need of funding for Asteroid Detection Telescope and ways of deflecting potential arrival or collision of any asteroid with our home, planet Earth. There is need of organized institution or national and international funding for Earth Protection Mechanism requiring cooperation by earthly nations. Astrophysicist Neil deGrasse Tyson explains how NASA deflects the asteroids that are careening toward our planet, in the video “Neil deGrasse Tyson reacts to report of asteroids barreling toward Earth”

Some of the world’s best scientists are running drills to practice for a near earth object collision. WIRED’s Robbie Gonzalez spoke with Cathy Plesko from the Los Alamos National Laboratory, to find out how we would respond to an incoming collision. Would nuclear detonations work? What does a “City Killer” look like? Would impact in the water be worse than impact on land? Find out more from Plesko, in the video “How Scientists Are Preparing Earth for an Incoming Asteroid, WIRED“, below:

In the video “The “God of Chaos” Asteroid That Might Hit Earth“, below:

To better understand the topic of Asteroid, please refer to the excerpt from wikipedia, in italics, below:

Asteroids are minor planets, especially of the inner Solar System. Larger asteroids have also been called planetoids. These terms have historically been applied to any astronomical object orbiting the Sun that did not resolve into a disc in a telescope and was not observed to have characteristics of an active comet such as a tail. As minor planets in the outer Solar System were discovered that were found to have volatile-rich surfaces similar to comets, these came to be distinguished from the objects found in the main asteroid belt.[1] In this article, the term “asteroid” refers to the minor planets of the inner Solar System, including those co-orbital with Jupiter.

There exist millions of asteroids, many the shattered remnants of planetesimals, bodies within the young Sun’s solar nebula that never grew large enough to become planets.[2] The vast majority of known asteroids orbit within the main asteroid belt located between the orbits of Mars and Jupiter, or are co-orbital with Jupiter (the Jupiter trojans). However, other orbital families exist with significant populations, including the near-Earth objects. Individual asteroids are classified by their characteristic spectra, with the majority falling into three main groups: C-type, M-type, and S-type. These were named after and are generally identified with carbon-rich, metallic, and silicate (stony) compositions, respectively. The sizes of asteroids varies greatly; the largest, Ceres, is almost 1,000 km (600 mi) across.

Only one asteroid, 4 Vesta, which has a relatively reflective surface, is normally visible to the naked eye, and this only in very dark skies when it is favorably positioned. Rarely, small asteroids passing close to Earth may be visible to the naked eye for a short time.[6] As of October 2017, the Minor Planet Center had data on almost 745,000 objects in the inner and outer Solar System, of which almost 504,000 had enough information to be given numbered designations.[7]

In April 2018, the B612 Foundation reported “It’s 100 percent certain we’ll be hit [by a devastating asteroid], but we’re not 100 percent sure when.”[10] Also in 2018, physicist Stephen Hawking, in his final book Brief Answers to the Big Questions, considered an asteroid collision to be the biggest threat to the planet.[11][12][13] In June 2018, the US National Science and Technology Council warned that America is unprepared for an asteroid impact event, and has developed and released the “National Near-Earth Object Preparedness Strategy Action Plan” to better prepare.[14][15][16][17][18] According to expert testimony in the United States Congress in 2013, NASA would require at least five years of preparation before a mission to intercept an asteroid could be launched.[19]

To better understand what B612 Foundation is, please refer to the excerpt from wikipedia, in italics, below:

The B612 Foundation is a private nonprofit foundation headquartered in Mill Valley, California, United States, dedicated to planetary science and planetary defense against asteroids and other near-Earth object (NEO) impacts. It is led mainly by scientists, former astronauts and engineers from the Institute for Advanced Study, Southwest Research Institute, Stanford University, NASA and the space industry.

As a non-governmental organization it has conducted two lines of related research to help detect NEOs that could one day strike the Earth, and find the technological means to divert their path to avoid such collisions. It also assisted the Association of Space Explorers in helping the United Nations establish the International Asteroid Warning Network, as well as a Space Missions Planning Advisory Group to provide oversight on proposed asteroid deflection missions.

In 2012, the foundation announced it would design and build a privately financed asteroid-finding space observatory, the Sentinel Space Telescope, to be launched in 2017–2018. Once stationed in a heliocentric orbit around the Sun similar to that of Venus, Sentinel’s supercooled infrared detector will help identify dangerous asteroids and other NEOs that pose a risk of collision with Earth. In the absence of substantive planetary defense provided by governments worldwide, B612 is conducting a fundraising campaign to cover the Sentinel Mission, estimated at $450 million for 10 years of operation. Fund raising has been very slow—raising only US$3 million in 2012 and 2013—and, as of June 2015, NASA is re-examining its reliance on private sector approach to space-based NEO survey missions.[2]

The B612 Foundation is named for the asteroid home of the eponymous hero of Antoine de Saint-Exupéry‘s The Little Prince.

In April 2018, the B612 Foundation reported “It’s a 100 per cent certain we’ll be hit [by a devastating asteroid], but we’re not 100 per cent sure when.”[3][4]Also in 2018, physicist Stephen Hawking, in his final book Brief Answers to the Big Questions, considered an asteroid collision to be the biggest threat to the planet.[5][6][7] In June 2018, the US National Science and Technology Council warned that America is unprepared for an asteroid impact event, and has developed and released the “National Near-Earth Object Preparedness Strategy Action Plan” to better prepare.[8][9][10][11][12] According to expert testimony in the United States Congress in 2013, NASA would require at least five years of preparation before a mission to intercept an asteroid could be launched.[13]

To better understand Sentinel Space Telescope, please refer to the excerpt from wikipedia, in italics, below:

The Sentinel Space Telescope was[1][2] a space observatory being designed and built for the B612 Foundation, and under development by Ball Aerospace & Technologies.[3][4] The B612 Foundation is dedicated to protecting the Earth from dangerous asteroid strikes and Sentinel was the Foundation’s first spacecraft to tangibly address that mission.

The space telescope was being designed to locate 90% of the asteroids greater than 140 metres (460 ft) in diameter that exist in near-Earth orbits. The telescope would have orbited the Sun in a Venus-like orbit (i.e. between Earth and the Sun), and was being designed to catalog 90% of the large asteroids in Earth’s region of the Solar System. The craft would have been placed in an orbit similar to that of Venus, allowing it to clearly view the night half of the sky every 20 days, and picking out objects that are currently often difficult, if not impossible, to see in advance from Earth.”[5] Sentinel would have had an operational mission life of six and a half to ten years.[6]

After NASA terminated their funding agreement with the B612 Foundation in October 2015[7] and the private fundraising goals could not be met, the Foundation eventually opted for an alternative approach using a constellation of much smaller spacecraft under study as of June 2017.[1] NASA/JPL‘s NEOCam has been proposed instead.

So, if you care about the survival of planet earth in case of collision with any asteroid, write or contact your nation’s politicians (in U.S., it’d be our Congress people and President of the United States) to ask all of our governments to allot funding for projects for Asteroid Detection and Deflection Mechanism and to find ways to collaborate with other nations on this subject matter. Furthermore, people can set up various fundraising projects utilizing various platforms or through various organizations. After all, this is the only home we’ve got. We don’t have much time to waste. So, let’s get on with it!