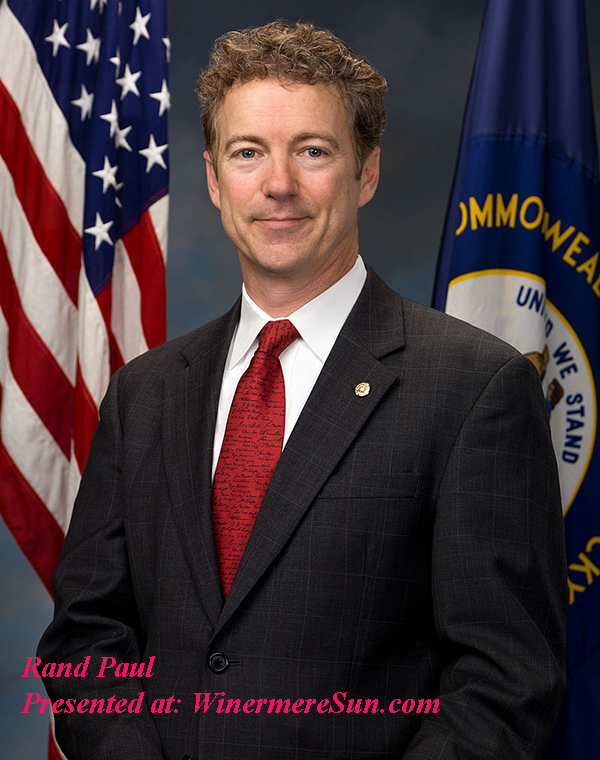 Speaking at a rally in Lexington, Kentucky, on Monday, Nov. 4, 2019, Trump says GOP Sen. Rand Paul’s call for the whistleblower to be publicly named was “excellent.” President Donald Trump is praising an ally’s call to unmask the intelligence community whistleblower whose complaint served as the catalyst for Democrats’ impeachment probe. Rand Paul claimed at the rally that the whistleblower’s identity is known, adding, “I say to the media, do your job and print his name.” U.S. whistleblower laws exist to protect the identities and careers of people who bring forward accusations of wrongdoing by government officials. Lawmakers in both parties have historically backed those protections. In the video “Trump in Kentucky: Rand Paul Calls on Media to Unmask Whistleblower“, below:

The Republican Matt Bevin is facing Democratic state Attorney General Andy Beshear in Tuesday’s election. The bitter Kentucky contest is being watched closely for early signs of how the increasingly partisan impeachment furor in Washington might affect Trump and other Republican incumbents in 2020.

Trump insists identity of whistleblower in Ukraine scandal must be made public and that he or she must be brought forth to testify. Meanwhile, Sen. Rand Paul calls on the media to release the whistleblower’s name. Maya Wiley and David Jolly join, in the video “President Donald Trump Ramps Up Attacks On Whistleblower, The 11th Hour, MSNBC“, below:

As David Jolly, former Republican congressman from Florida, stated, “The whistleblower is a patriot, plain and simple, and should be defended by both the President of the United States and United States senators, for following the law and putting national security ahead of any politics that Donald Trump or Rand Paul want to play in this moment. It’s also setting up a false argument that you’re going to hear from the Republicans and Democrats are not going to fall for it and neither should the American people. The status of the whistleblower is inconsequential at this point. Everything that he/she has initially presented has been corroborated, has been admitted to by the president, corroborated by Mick Mulvaney, confirmed by Bill Taylor, contextualized by Lt. Col. Alexander Vindman as a matter of national security. Gary Kasparov, the grand master of chess and Russian political activist said, “The point of disinformation is not just to get people to accept the lie, but to get people to annihilate the truth, to exhaust people’s defense of the truth. That’s what Donald Trump has done with today’s Republican party. I shared with your colleague Nicole Wallace earlier today: what Republicans’ final argument will require is convincing the American people that only Donald Trump tells the truth, that Lt. Col. Vindman is not telling the truth, that the Ambassador McKinley, the dean of the foreign service, is not telling the truth, that the Ambassador Yovanovitch is not telling the truth. At the end of the day, this is the Republican Party saying that Donald Trump is the only person who speaks the truth in the American politics. And we know from his history, his history is replete with lies and deceptions on the American people. And he is actually fulfilling the warning that Gary Kasparov has left with us.”

In case you are not familiar with the Whistleblower Protection Act, please peruse through the excerpt from wikipedia, in italics, below:

The Whistleblower Protection Act of 1989, 5 U.S.C. 2302(b)(8)-(9), Pub.L. 101-12 as amended, is a United States federal law that protects federal whistleblowers who work for the government and report the possible existence of an activity constituting a violation of law, rules, or regulations, or mismanagement, gross waste of funds, abuse of authority or a substantial and specific danger to public health and safety. A federal agency violates the Whistleblower Protection Act if agency authorities take (or threaten to take) retaliatory personnel action against any employee or applicant because of disclosure of information by that employee or applicant.[1]

Note the magenta section of the paragraph above: A federal agency violates the Whistleblower Protection Act if agency authorities take (or threaten to take) retaliatory personnel actin against any employee or applicant because of disclosure of information by that employee or applicant.  (This is what Rand Paul and Trump have violated.)