Bribes: A 1902 cartoon depicts a police officer whose eyes are covered with a cloth labelled "bribes", so he cannot see the offenses around him (Presented at: WindermereSun.com) 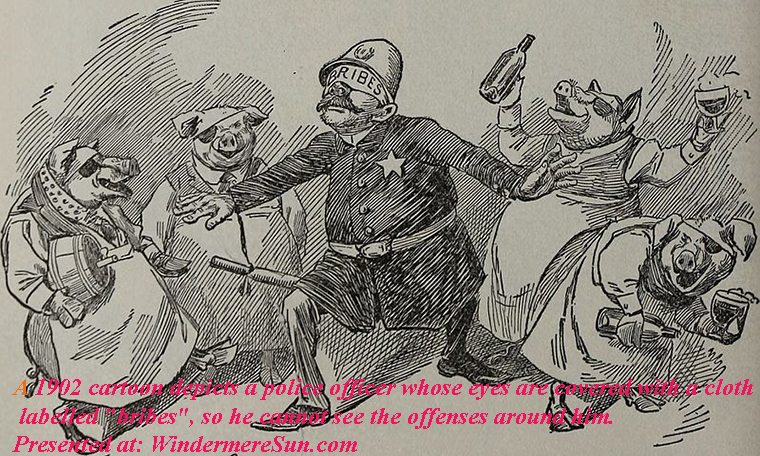 Bribes: A 1902 cartoon depicts a police officer whose eyes are covered with a cloth labelled “bribes”, so he cannot see the offenses around him (Presented at: WindermereSun.com)

Roughly two-dozen House Republicans stormed a closed-door deposition in secure House Intelligence Committee spaces to rail against the Democratic-led impeachment inquiry, a political stunt ratcheting up the GOP complaints about the process that delayed the scheduled deposition for five hours, in the video “Republican makes admission about storming House hearing room, Cuomo Prime Time“, below:

President Trump, who met with some of the Republican lawmakers involved in the protest, had advance knowledge of the plans to attempt entry to the SCIF, according to a person familiar with the matter, in the video “Trump knew about GOP protest ahead of time, sources say“, below:

A group of Republican lawmakers loyal to President Trump stormed an impeachment inquiry congressional session Wednesday, forcing it to a standstill for much of the day. Democrats said the disruption indicated that the GOP is “desperate” after Tuesday’s testimony shed critical new light on the president’s actions toward Ukraine. Yamiche Alcindor reports and joins Judy Woodruff to discuss, in the video “GOP lawmakers violate House rules to disrupt Pentagon official’s testimony“, below:

According to Quinnipiac University Poll, the national support for impeachment inquiry is now at 55%. And the House Republicans responded by a public stunt.

The reason these House Republicans are panicked and committing act of endangering national security by bringing their phones into SCIF (Sensitive Compartmented Information Facility) is due to damaging testimony by Bill Taylor earlier (please refer to the Opening Statement of Ambassador William B. Taylor on Oct. 22, 2019). These House Republicans are attempting to shut down the impeachment inquiry in order to demonstrate their loyalty to Trump. Under normal circumstance, individuals committing such an act (bringing phones into SCIF) would have been: Scolded (first offense), receiving Official Reprimand (second offense), and having Security Clearance revoked (third offense) because this is how bugs may be planted. Foreign intelligence services can remotely turn a target’s cell phone into a covert listening device, even when the phone is not in use. These House Republicans have made a mockery of the proceedings and law of order.

In an opening statement by Bill Taylor, a top U.S. Diplomat in Ukraine, Taylor stated, “Ambassador Sondland said, ‘everything’ was dependent on such an announcement, including security assistance. He said that President Trump wanted President Zelensky ‘in a public box’ by making a public statement about ordering such investigations…..on September 8, Ambassador Sondland tried to explain to me that President Trump is a businessman. When a businessman is about to sign a check to some one who owes him something, he said, the businessman asks that person to pay up before signing the check.”

According to Bill Taylor’s opening remarks, the release of US military support was contingent on a commitment from Ukraine that they would investigate the Bidens and the 2016 campaign, in the video “Ted Lieu Calls Bill Taylor’s Testimony ‘Damning’ For President Donald Trump, Hardball, MSNBC“, below:

Other major findings from Taylor’s testimony:

Nearly two-dozen House Republicans stormed a closed-door House Intelligence hearing to protest the Democratic-led impeachment inquiry into President Donald Trump. CNN’s Anderson Cooper reports on the issues with the protest and the Republican defenses of it, in the video “Anderson Cooper: These hearings aren’t a democratic star chamber“, below:

Pres. Trump faces many potential grounds for impeachment, but the strongest is one of two impeachment offenses specifically spelled out in the Constitution — bribery. Ari Melber, MSNBC’s Chief Legal Correspondent and an attorney, reports how the House could apply the bribery provision to impeach Trump, walking through the legal rules and mounting evidence against the President. Melber also discusses some of the defenses available to Trump, and contrasts a focus on bribery to past impeachment efforts that have bogged down on how to define a “high crime.”Revealed: The Strongest Case For Impeaching Trump Is Bribery, The Beat With Ari Melber, MSNBC“, below:

Facing mounting impeachment evidence, GOP lawmakers break the rules to “shut down” a closed door impeachment hearing in a secure location. Some republicans are even walking away from cameras and dodging questions on testimony alleging Trump engaged in a quid pro quo with Ukraine. A source close to Sen. Mitch McConnell admits we are at “a dark moment” for Trump, in the video “‘A Dark Moment’: Alleged Trump Ukraine Crime Sends GOP Into Spiraling Circus, MSNBC“, below:

Rachel Maddow rewinds the Trump presidency from its beginnings with Trump as a candidate with an odd deference for Russia, through the Mueller investigation and into the impeachment inquiry and its adjacent criminal cases and investigations, and points out that it’s all the same scandal, in the video “Despite Twists, President Donald Trump Saga Actually Just One, Big Scandal, Rachel Maddow, MSNBC“, below:

Rachel Maddow looks at arguments made in federal court in which Donald Trump’s lawyers claimed that as long as Trump is in office, no one may investigate him, or prosecute him, or even stop in the process committing any crime, including murder on 5th Avenue, in the video “Trump Lawyers Argue His Crimes Can’t Be Investigated, Prosecuted, Rachel Maddow, MSNBC“, below”:

The latest argument by President Trump’s lawyer: President cannot be investigated by any one even if he has committed murder on Fifth Avenue.

Dan Rather and Sam Donaldson tell CNN’s Don Lemon that they think that President Donald Trump is dangerous for the country because Trump is only interested in protecting himself, “Dan Rather, Sam Donaldson have dire warning about Trump“, below:

Amidst Trump’s top Republican ally, Lindsay Graham, saying he would support impeachment if more evidence of a quid pro quo was revealed, President Trump is begging for his GOP allies to be ‘tougher’ and ‘fight’ against impeachment. Reason Magazine’s Matt Welch argues Graham’s ‘wobbling’ comments about impeachment are ‘significant’ and show signs of ‘possible weakness’ within the party’s stance on impeachment, in the video “Turning Point? Key Republicans Open To Impeachment Trump , The Beat With Ari Melber, MSNBC“, below:

For the lighter side of this situation, here is the CONAN’s take on this event, in the video “House Republicans Storm CONAN-CONAN on TBS“, below: