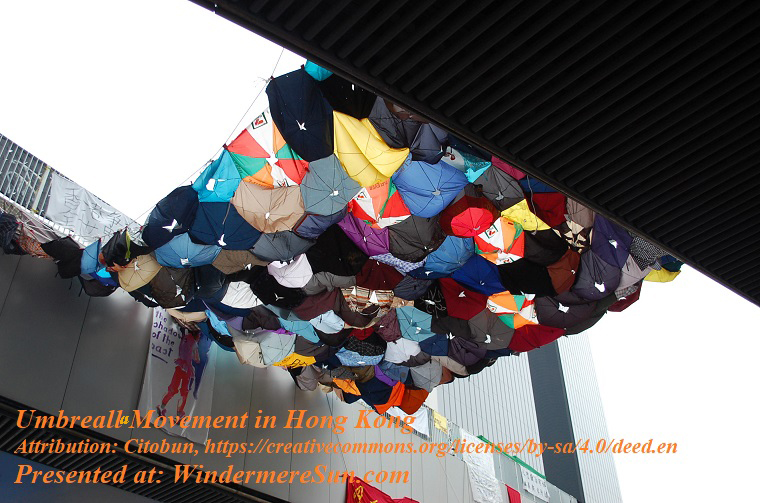 Hong Kong’s Umbrella Movement  for Democracy continued this weekend peacefully and fearlessly. 1.7 million people took part in Hong Kong’s pro-democracy rally over the weekend, undeterred by torrential rain and the threat of a Chinese paramilitary presence stationed across the border. It is time for the two sides to sit down and genuinely come to a resolution. The fact that Xi Jinping wrote an op-ed over the weekend explaining his empathy for Hong Kong young people’s difficult position in dealing with high cost of housing in Hong Kong is an indicator for potential olive branch. Historically, the peaceful Indian protest led by Mahatma Gandhi or the American Vietnam War protest were effective because the British and American governments were governed by  groups of people of conscience. As a whole, Xi Jinping has proven to be an effective leader with conscience and pragmatism; that is in the interest of people of Hong Kong. Whether or not Xi Jinping will continue to be a leader of conscience and pragmatism remains to be seen. It is critical that leadership from Hong Kong business community, legal community, as well as the young people’s community to come together to clearly state the conditions under which it would be agreeable for Hong Kong people to sit down with their government. People of the entire planet earth is watching and wishing peace for both sides.

Yes, Alain Robert, we totally concur! There must be a way to solve the problem peacefully. With all the intelligent people on both sides (China and Hong Kong), they should be able to resolve the issue peacefully. On August 16, 2019, the French Spiderman, 57 year-old Alain Robert once again climbed the Cheung Kong Centre in Hong Kong. He hung a banner with the Hong Kong and China flags above a handshake near the top of the building, in the video “‘French Spider-Man’ scales Hong Kong skyscraper“, below:

French ‘Spiderman’ Alain Robert begins scaling a skyscraper in Hong Kong amid rising political tensions and unfurls a banner showing a handshake alongside emblems of the city and China. The key Asian financial hub has been rocked by pro-democracy demonstrations for more than 10 weeks, in the video “French ‘Spiderman’ scales HK skyscraper, unfurls ‘peace’ banner, AFP“, below:

Protests have been raging in Hong Kong for months. Robert Guest, our foreign editor, joins Anna Bucks, the producer/director of “Hong Kong protests: what’s at stake for China” (https://econ.st/30kucKm) for a live discussion, in the video “Hong Kong Protests: The Economist, live Q & A“, below:

In the video “Hong Kong: 1.7 million march for democracy“, below:

About 10 protesters returned to Hong Kong’s Revenue Tower on June 25, 2019, to apologize for causing a disturbance by blockading the building the previous day.  On June 24, about 100 protesters jammed the entrance to the tax office to pressure the government to withdraw an unpopular extradition bill which would allow fugitive transfers to the Chinese mainland. A day after scuffles broke out between protesters and members of the public and civil servants who were trying to pass, some of the demonstrators handed out fliers and bowed to passers-by outside to express regret and try to maintain public support, in the video “Hong Kong protesters apologize after storming government building“, below: