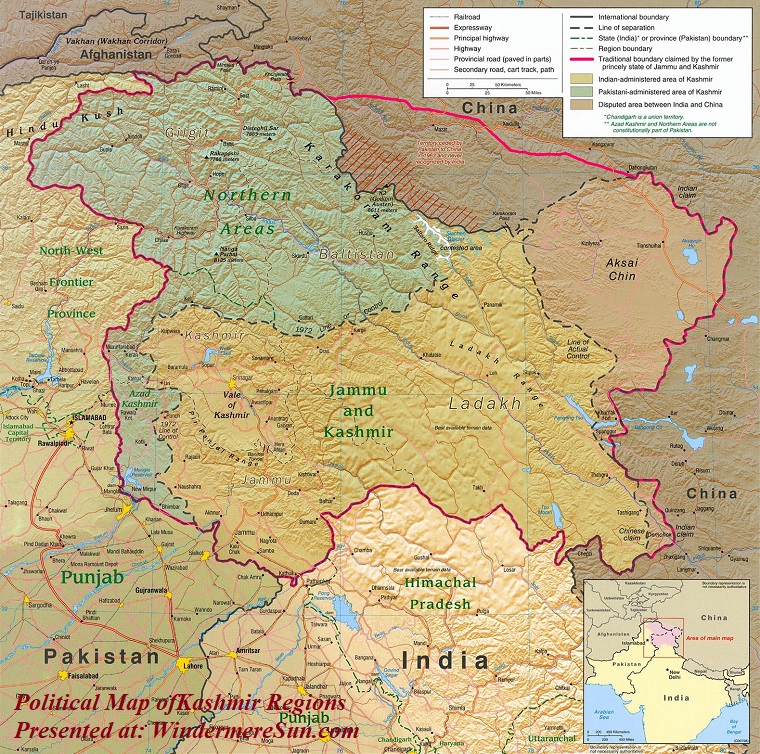 Political Map of the Kashmir Regions (Presented at: WindermereSun.com)

Tensions are escalating between India and Pakistan over Kashmir, a disputed territory claimed by both countries. India revoked semi-autonomous status of Kashmir on Monday, August 5, 2019. Pakistan retaliated on Wednesday, August 7, 2019, by downgrading its diplomatic relations with India and threatened to possible do more. Michael Kugelman, deputy director of the Asia Program at The Wilson Center, joined CBSN to discuss the latest, in the video “India-Pakistan tensions escalate over Kashmir“, below:

The story of how a hastily-drawn line divided one people into India and Pakistan, in the video “How this border transformed a subcontinent, India & Pakistan“, below”:

The United Nations released the statement: “We are deeply concerned that the latest restrictions in Indian-Administered Kashmir will exacerbate the human rights situation in the region.“

Pakistan Prime Minister Imran Khan said in a speech to parliament, Tuesday, August 6, that following India’s move to change the status of disputed Kashmir, Islamabad and New Delhi could go to war if India repeats a military strike inside his country. Khan said he feared that Kashmiri people, angered over India’s decision to strip the region of its special status, could launch an attack on Indian security forces and that New Delhi could blame Pakistan for it. (AP). Meanwhile, a senior American diplomat arrived in Islamabad Tuesday for pre-scheduled bilateral meetings.  Pakistani officials said the latest developments in Kashmir were likely to figure high in the talks with Alice Wells, the U.S. principal deputy assistant secretary of state in charge of South and Central Asian affairs, in the video “Pakistan Prime Minister Imran Khan Voices Concerns on India’s Kashmir Move“, below:

Indian lawmakers passed a bill, Tuesday, August 6, which downgrades the governance of the Indian-administered portion of Muslim-majority Kashmir. Lawmakers celebrated as they ratified the legislation, stripping Kashmir of much of its autonomy. Kashmir itself remained in lockdown Tuesday, with the streets largely empty, except for soldiers and military vehicles, in the video “India Raifies Bill Revokng Kashmir Special Status“, below:

India’s parliament voted to reclassify the state of Jammu and Kashmir as a union territory, giving the government in New Delhi greater authority over the country’s only Muslim-majority region.  Tens of thousands of additional Indian troops have been deployed into the already heavily militarized region to head off unrest, and several prominent politicians have been placed under house arrest.The region remains in lockdown amid a communications blackout, with landline connections, internet and mobile coverage all suspended, in the video “India seeks to tighten control over Kashmir and Jammu“, below:

Indian Prime Minister Narendra Modi announced on Thursday, August 8 that state assembly elections would take place soon, the latest move by India after it ended special status for the state of Kashmir. It came as both the United Nations and Pakistan were criticizing recent moves by India, including the special status revocation. The UN called for restraint over Kashmir and for all parties to refrain from taking steps that could affect the status of Jammu and Kashmir. Pakistan said it would not take military options, but did question the moves and asked for India to withdraw its high commissioner from Islamabad, in the video “Modi announces Kashmir, Jammu elections, UN and Pakistan slam recent moves by India“, below:

Thousands of people took to the streets in Srinagar after Friday prayers, in the largest demonstration since a lockdown was imposed in Indian-administered Kashmir. The BBC witnessed the police opening fire and using tear gas to disperse the crowd. Despite that, the Indian government has said the protest never took place, in the video “Tear gas at Kashmir rally denies happened-BBC News“, below:

Thousands of protesters have vented their anger over India’s decision to revoke Kashmir’s special status in Pakistan’s capital Islamabad, in the video “Thousands vent anger over Kashmir at Pakistan protest“, below:

I am a mother/wife/daughter, math professor, solar advocate, world traveler, yogi, artist, photographer, sharer of knowledge/information, and resident of Windermere, FL. I've worked professionally in applied math, engineering, medical research, and as a university math professor in IL and FL for about 20 years. My husband and I loved Disney and moved down to Central Florida initially as snowbirds. But we've come to love the warmth and friendly people offered by this community and decided to move down to Windermere, FL full time in 2006. I am now spending time sharing information/ knowledge online, promoting understanding of math and solar energy (via http://www.sunisthefuture.net ), and developing Windermere Sun (http://www.WindermereSun.com) as an online publication, sharing and promoting Community ABC's (Activities-Businesses-Collaborations) for healthier/happier/more sustainable living. In the following posts, I'll be sharing with you some of the reasons why Windermere has attracted us to become full-time residents of Central Florida region. Please feel free to leave your comments via email at "Contact Us" in the topbar above or via [email protected] ~Let's help one another~ Windermere Sun-Susan Sun Nunamaker Founder/Owner/Editor/Producer of Windermere Sun email: info.Wind[email protected] Twitter: @WindermereSun