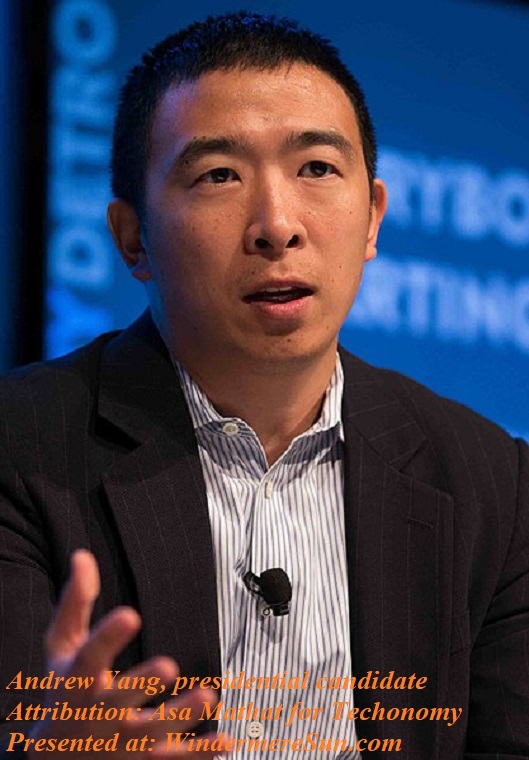 One of the Democratic Presidential Candidates, Andrew Yang, is the only candidate addressing some very critical issues that all voters should pay attention to: future of automation, universal basic income or freedom dividend, medicare for all, climate change policy (such as carbon fee dividend, rejoining Paris Accord, investing in carbon capture and sequestration and geoengineering measures, sending up satellite and block the sun with expandable mirrors to slow down global warming, shoring up earth at the base of the glaciers to slow the melting rate, etc.), investing in fusion power, necessity in investing in asteroid detection telescope, moving toward renewables, human-centered capitalism and trickle-up economy.

Andrew Yang  is an American entrepreneur, the founder of Venture for America (VFA). He worked in startups and early-stage growth companies as a founder or executive from 2000 to 2009. After he founded VFA, the Obama administration selected him in 2012 as a “Champion of Change” and in 2015 as a “Presidential Ambassador for Global Entrepreneurship“. In Yang’s bid for the 2020 presidential nomination, one of his main campaign goals is to implement a provision for Universal Basic Income (UBI) known as the Freedom Dividend for every American adult, in response to the rapid development of automation that is leading to workforce challenges.

Democratic presidential hopeful Andrew Yang stopped by The Breakfast Club to break down his platform for the 2020 election and explain why he’s the best candidate for the job, in the video “Andrew Yang Talks Universal Basic Income, Benefitting From Tech, His Run For President + More“, below:


Andrew Yang is in favor of an evolved view of economy that is human-centered capitalism rather than the winner-take-all capitalism. Instead of using GDP or capital efficiency as form of measurement of our economy, Yang proposes measuring physical health, mental health, freedom from substance abuse, average income and affordability, clean air and clean water as measurements of economic progress.

Presidential candidate Andrew Yang sits down with The Root to discuss his views on everything from human-centered capitalism to the Flint Water crisis, and his thoughts on reparations, in the video “Andrew Yang’s Plan For Black America“, below:

Andrew Yang’s headline speech at the 2018 Iowa Wing Ding, the largest Democratic event in the state of Iowa, that received a standing ovation and countless press stories, in the video “Andrew Yang’s Pitch to America-We Must Evolve to a New Form of Capitalism“, below:
Video “Andrew Yang on why Asian Americans need to get involved in Politics“, below: For Andrew Yang’s campaign web site, please click HERE.

If you’d like to see his platforms (Universal Basic Income or Freedom Dividend, Medicare For All, Asteroid Detection Telescope, Psychologist in the White House, etc.) being debated, please help him to get to the debate by donating (even just $1) at his campaign web site, please click HERE.

For more on Andrew Yang, please refer to the excerpt from wikipedia, in italics, below:

Yang was born in Schenectady, New York,[4] to immigrant parents from Taiwan.[5] His parents met while they were both in graduate school at the University of California, Berkeley.[6] His father graduated with a Ph.D. in physics and worked in the research labs of IBM and General Electric, generating over 69 patents in his career.[6] His mother graduated with a master’s degree in statistics and later became an artist.

Yang attended Phillips Exeter Academy, a boarding school in New Hampshire. He graduated from Exeter in 1992 and went on to attend Brown University,[7] receiving a Bachelor of Arts (BA) in economics.[8] After Brown University, Yang attended Columbia Law School where he received a Juris Doctor (JD).[8]

In 1999, after graduating from Columbia Law School, Yang began his career as a corporate attorney at Davis Polk & Wardwell in New York City. He left the firm in 2000 to launch Stargiving.com, a website for celebrity-affiliated philanthropic fund-raising.[9][10] Stargiving.com raised some capital from investors but folded in 2001. Afterward, Yang joined a healthcare software startup, MMF Systems, Inc., as its Vice President and third hire.[11]

After working in the healthcare industry for four years, Yang left MMF Systems to join friend Zeke Vanderhoek at a small test preparation company, Manhattan Prep. In 2006, Vanderhoek asked Yang to take over as CEO. While he was CEO of Manhattan Prep, the company primarily provided GMAT test preparation. The company expanded from five to 69 locations and was acquired by Kaplan in December 2009. Yang resigned as the company’s president in early 2012.[12][13][14]

Following the acquisition of Manhattan Prep in late 2009, Yang began to work on creating a new nonprofit fellowship program called Venture for America, which he founded in 2011 with the mission “to create economic opportunity in American cities by mobilizing the next generation of entrepreneurs and equipping them with the skills and resources they need to create jobs”.[7][15][16][17]

VFA’s strategy was to recruit the nation’s top college graduates into a two-year fellowship program in which they would work for and apprentice at promising startups in developing cities across the United States. Yang’s book Smart People Should Build Things argues that the top universities in the country cherry-pick the smartest kids out of small towns and funnel them into the same corporate jobs in the same big cities.[19] Venture for America’s goal is to help distribute that talent around the country and incentivize entrepreneurship for economic growth.

Generation Startup, a documentary film about six startups in Detroit launched through the Venture for America program, was released in 2016. It was co-directed by Cynthia Wade and Cheryl Miller Houser.[22]

On November 6, 2017, Yang filed with the Federal Election Commission (FEC) to run for President of the United States in 2020.[23] His campaign proposes a $1,000/month “Freedom Dividend” to all U.S. citizens over the age of 18 (a form of universal basic income) and other responses to predictions of mass unemployment from technological automation.[24][25] An article in The New York Times about his campaign described various new policies Yang proposes, such as a department focused on regulating the addictive nature of media, a White House psychologist, making Tax Day a national holiday, and, to stem corruption, increasing the salaries of federal regulators but limiting their private work after they leave public service.[26] Yang’s campaign slogan is “Humanity First”, which calls attention to his belief that automation of many key industries is one of the biggest threats facing the workforce.[27]

Yang has stated that he became an advocate of a universal basic income after reading American futurist Martin Ford‘s book Rise of the Robots: Technology and the Threat of a Jobless Future, which deals with the impact of automation and artificial intelligence on the job market and economy.[28]

Yang is at least the fourth Asian American to run for President of the United States, after Hiram Fong, Patsy Mink, and Bobby Jindal.[29][30][31]

On March 11, 2019, Yang announced that by receiving donations from 65,000 donors in at least 20 U.S. states, he had met the requirements for being included in the first round of debates for candidates in the Democratic presidential primary election[32] (subject to verification).[33]