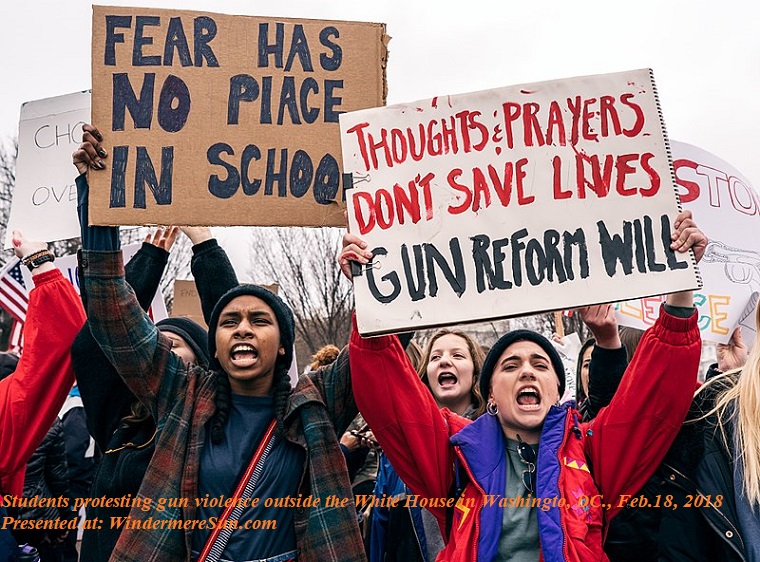 Today marks one year since the deadly shooting at a high school in Parkland, Florida. 17 people were killed, sparking students to work for change. On this Valentine’s Day, Windermere Sun chose to remember a group of motivated young people at Marjory Stoneman Douglas High School, who enabled all of us to associate their high school’s name  with positive activism to bring about the much needed change.

Families and friends gather outside Marjory Stoneman Douglas High School to remember the victims of the Florida school shooting that took the lives of 17 people on Valentine’s Day one year ago, in the video “Florida remembers victims of Parkland school shooting 1 year on“, below:
One year ago, on Valentine’s Day, 17 students died when a gunman opened fire at Marjory Stoneman Douglas High School in Parkland, Florida. The incident remains one of the deadliest mass shootings in modern U.S. history, among other recent massacres like the 2012 Sandy Hook school shooting in Connecticut, where 27 students were killed, and the 2016 shooting at Pulse nightclub in Florida, where 49 people were gunned down. Parkland students Isabel Chequer, Samantha Fuentes, and Ashley Baez were all injured on the day of the shooting. In the months since the incident, they’ve marched, they’ve rallied, and they’ve lobbied for better gun-control policies. But they’ve also struggled — bravely — to recover from the trauma of that day. “When I enter a place, I sort of look where I can go in case of an emergency, or sometimes I just see someone with a backpack and I think, Do you think they can have a gun in there?” said Chequer. “And it doesn’t seem like it would be that big of a change, but it’s a huge change in my life.” In videos below, “3 #Parkland Students on How Their Lives Have Changed Since the Shooting“, below: A year ago, many Parkland students took action. Marjory Stoneman Douglas High students announced that they will be taking part in a summer bus tour “March for Our Lives – Road to Change” to champion gun reform in the wake of the Valentine’s Day shooting at their school which left 17 people dead, in the video “Marjory Stoneman Douglas High School Students Hit The Road For Gun Reform“, below:
Photographed, gathered, written, and posted by Windermere Sun-Susan Sun Nunamaker
More about the community at www.WindermereSun.com