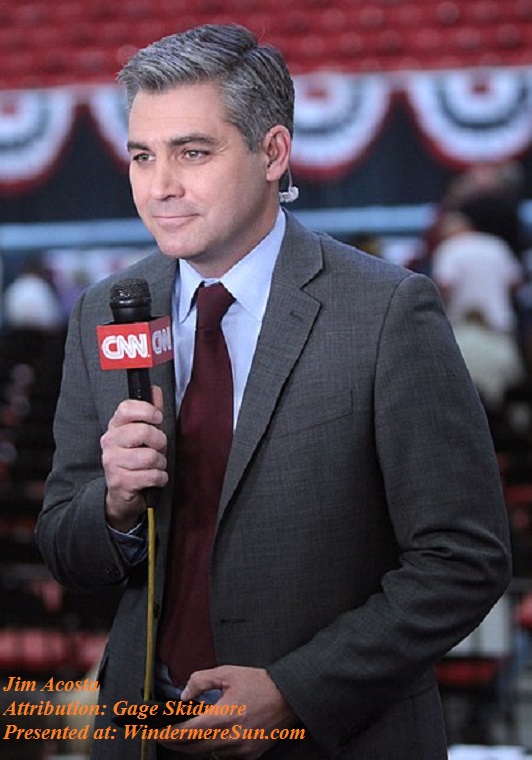 After the White House suspended the press credentials of CNN reporter Jim Acosta on Wednesday, Nov. 7, 2018, hours after President Trump took issue with questions Jim Acosta was asking at a news conference regarding migrant workers moving to the border of U.S. (Trump snapped at Acosta after Acosta asked whether the president had demonized immigrants by calling a caravan of Central American migrants “an invasion”,  in the video below), Press secretary Sarah Huckerbee Sanders said Acosta’s access was removed because he had put “his hands on a young woman”. Please feel free to view the video below to determine your thoughts on Sanders’ assessment of the situation.

In the days following the suspension, as CNN made behind-the-scenes efforts to restore Acosta’s access and prepared a possible lawsuit toward this end as well,  network news pieces quoted opinions of media law professor Jonathan Peters that “a journalist has a first amendment right of access to places closed to the public but open generally to the press […which] can’t be denied arbitrarily or absent compelling reasons” and of well-known free speech litigator Floyd Abrams, who said, “CNN might have reluctance to have a lawsuit titled ‘CNN vs. Donald Trump.’ That said, yes, I think they should sue.”

CNN had filed a lawsuit against the Trump administration after the White House revoked correspondent Jim Acosta’s press credentials following a heated incident where an aide tried to grab a microphone from Acosta during a press conference, in the video “CNN Suing White House For revoking Him Acosta’s Press Credentials” below:

On Friday, Nov. 16, 2018, Mr. Acosta was pleased with the ruling by  Judge Timothy Kelly that the White House must give back his press pass. The judge said there should be a due process in place for limiting a journalist’s access to the White House.     A federal judge on Friday ordered the White House to restore CNN reporter Jim Acosta’s press badge, which had been revoked earlier this month after a contentious exchange at a news conference with President Donald Trump. U.S. District Court Judge Timothy Kelly, a Trump appointee, said the White House had violated Acosta’s Fifth Amendment right to due process by suspending his press badge without explanation or a chance for CNN to appeal the decision.
Excerpt from wikipedia, below, regarding Litigation CNN v. Trump, in italics:

On November 13, 2018, CNN and Acosta, through counsel Ted Boutrous and Ted Olson of Gibson Dunn, filed civil suit in the U.S. District Court for the District of Columbia against Trump, White House Chief of Staff John Kelly, Deputy Chief of Staff/director of Communications Bill Shine, Press Secretary Sarah Sanders, the U.S. Secret Service and its director, Randolph Alles, and an unnamed Secret Service agent, all in their official capacities. The filing also requested relief by way of an order temporarily restraining the White House from denying access to Acosta for journalistic purposes.[44][45][46]

Amicus briefs were filed with the court in support of CNN’s case, from journalistic entities whose editorial policies range across the political spectrum.[47][48] The U.S. Department of Justice filed a brief arguing that First Amendment free speech rights do not “restrict the president’s ability to determine the terms on which he does, or does not, engage with particular journalists.”[49]

As of February 11, the case is being heard by Timothy Kelly, a Trump appointee to the District Court for the District of Columbia, who, on November 16, ordered Acosta’s credentials restored for the time being, owing to the court’s belief that Acosta’s due process rights likely had been violated, with the court’s making no reference of the suit’s arguments thus far concerning the First Amendment.[50]

Removing Acosta’s access to the White House as the move to punish him was believed to be unprecedented. Trump administration barred another CNN reporter from attending an open media event back in July, but now had gone on to removing credential of “hard pass”, which enables journalists to enter the White House ground.
Gathered, written, and posted by Windermere Sun-Susan Sun Nunamaker
More about the community at www.WindermereSun.com