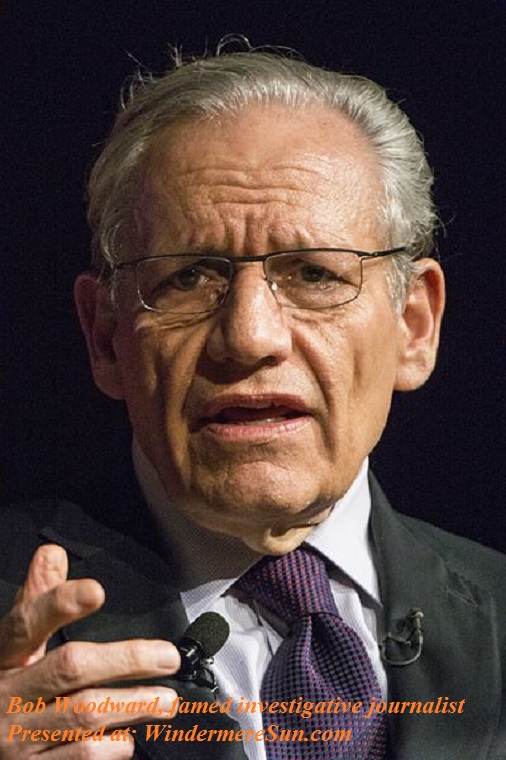 
Bob Woodward (aka Robert Upshur Woodward), an American investigative journalist who worked for The Washington Post since 1971 as a reporter and  now an associate editor there. Woodward teamed up with Carl Bernstein in 1972 to report much of the original news reporting of the Watergate scandal, which led to the government investigations and eventual resignation of President Richard Nixon. The long time journalism figure Gene Roberts considered work of Woodward and Bernstein “maybe the single greatest reporting effort of all time.”  Woodward continued to work for The Washington Post after Watergate scandal and had since written 18 books on American politics (12 of which topped best seller lists).

His new 448-page book “Fear: Trump in the White House” is set to provide a behind-the-scene look at the distrust within the president’s inner circle and chaos that reportedly consumes the Trump White House. It is based on hundreds of hours of reporting with current and former Trump officials as long as Woodward agreed to keep their names out of the book. Trump’s former chief of staff, former chief economic adviser, and former staff secretary may had been the main sources of this book, according to New York Times. It depicts troubled and often paranoid relationship between Trump and his most senior staff, in which Trump’s advisers often hesitated to share information with the president or at times even actively plotted to keep key documents out of Trump’s hands in order to protect the country. “Fear” was due to appear on Tuesday, September 11, but its review is already out.

The Trump administration is pushing back and denying claims reported in Bob Woodward’s new book. CBS News national security correspondent David Martin spoke with the “Fear” author about the incidents covered in the book and the many hours of recordings he sifted through, in the video ““Fear” in the White House” below:

There are explosive new details about the Trump White House today, uncovered by veteran journalist Bob Woodward in his upcoming book “FEAR.” in video “Bob Woodward’s Book Portrays ‘A Nervous Breakdown’ Of The White House” below: President Trump is slamming excerpts of Bob Woodward’s latest book, “Fear,” calling the journalist a Democratic operative and questioning his credibility. CBS News Chief White House correspondent Major Garrett reports on the mood there, in video “Trump reacts to new book from Bob Woodward: He has “credibility issues”” below: Bob Woodward’s new book called “Fear: Trump in the White House” paints a portrait of a dysfunctional White House under President Trump. CNN’s Jamie Gangel reports, in the video “Woodward book describes “crazytown” Trump White House” below:
President Trump and Bob Woodward discuss Woodward’s new book, “Fear,” before its publication, in the video “Exclusive: Listen to Trump’s conversation with Bob Woodward” below:
Gathered, written, and posted by Windermere Sun-Susan Sun Nunamaker
More about the community at www.WindermereSun.com