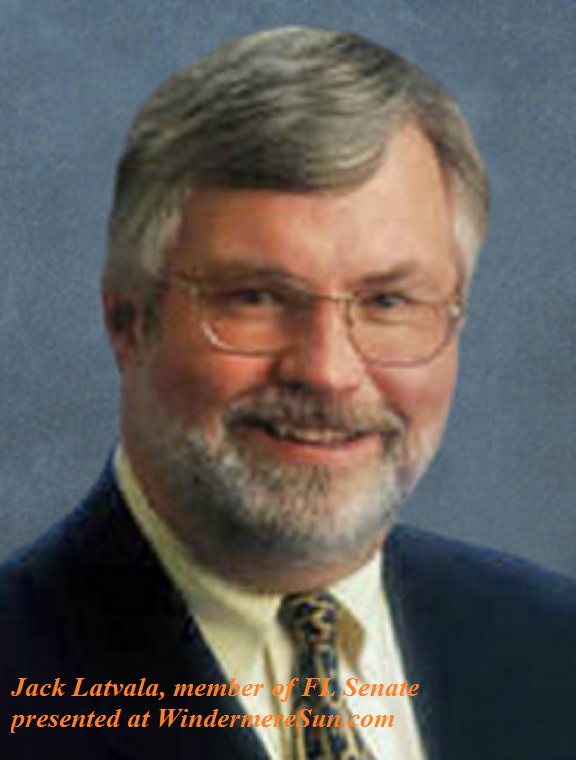 Jack Latvala is a Republican politician from Florida and member of the Florida Senate who has represented the Pinellas County since 2010, and previously from 1994 to 2002. On Wednesday, December 20, 2017, he resigned effective January 5, 2018, following allegations of sexual harassment and public corruption. Facing a public corruption investigation and possible expulsion from the Florida Senate, Jack Latvala resigned a day after a retired judge, Ronald Swanson‘s 33-page report (documenting explicit text messages from the senator over the past three years, that he agreed to support a lobbyist’s agenda if she would have sex with him or let him touch her in a sexual manner) concluded that he had very likely violated Florida state corruption laws by trading legislative favors for physical contact and for sexual harassment and groping of multiple women.


Report below was from back in Nov., 2017, on Latvala:
“I have never intentionally dishonored my family, my constituents or the Florida Senate,” Latvala wrote in the letter of resignation to Senate President Joe Negron, ending a controversial career that spanned over three decades.

The unidentified woman in the report is now a Senate employee and had known Latvala since the mid-1990’s, according to Swanson. Swanson quoted her stating that she ended her lobbying career “in large part so she would never have to owe Latvala anything.”  “Her testimony raises issues of public corruption and ethics violation not within the scope of this report,” Swanson wrote.

The Florida Department of Law Enforcement was conducting a preliminary review of Latvala’s conduct (which Swanson said may be criminal) when Latvala was resigning. His resignation occurred on a day when the Senate released a second report from an independent investigator looking into anonymous claims of sexual harassment against Latvala by multiple women. Latvala’s resignation is the third 40-member Senate this year, following Frank Artiles, a Miami Republican resigning in April after other senators complained about his use of racial slurs, and Lake Worth Democrat Jeff Clemens resigning in late October after he acknowledged an affair with a lobbyist.

Regardless what the future has in store for Latvala-Artiles-Clemens, one thing is for certain: women and the American society as a whole will no longer tolerate people in power to abuse their power in terms of sexual harassment or inappropriate behavior. We are facing a brighter future for both genders.