Wake Up Call- Iceberg Breaking Away From Larsen C In Antarctica 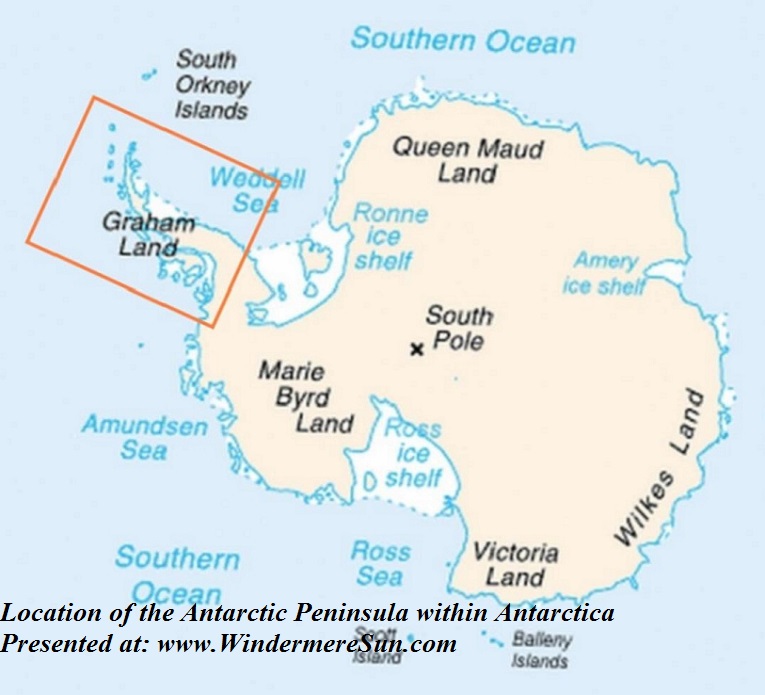 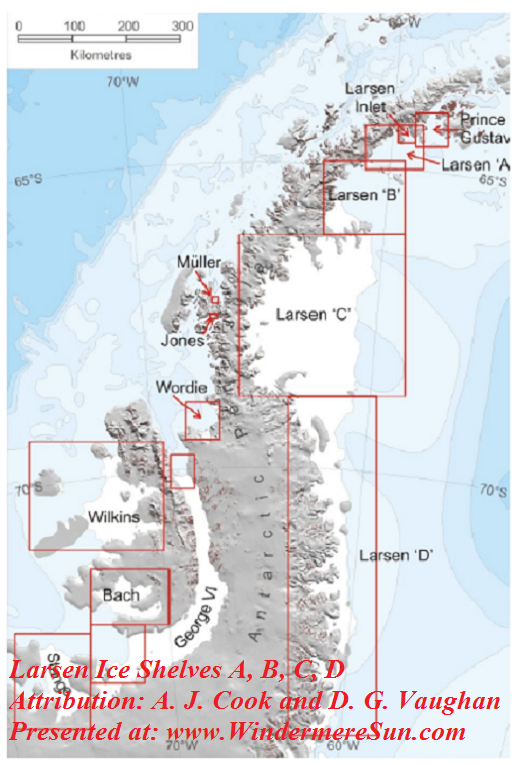 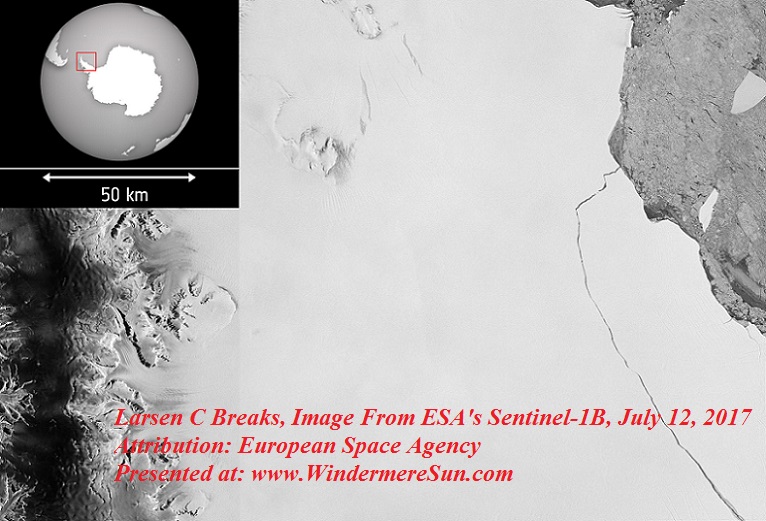 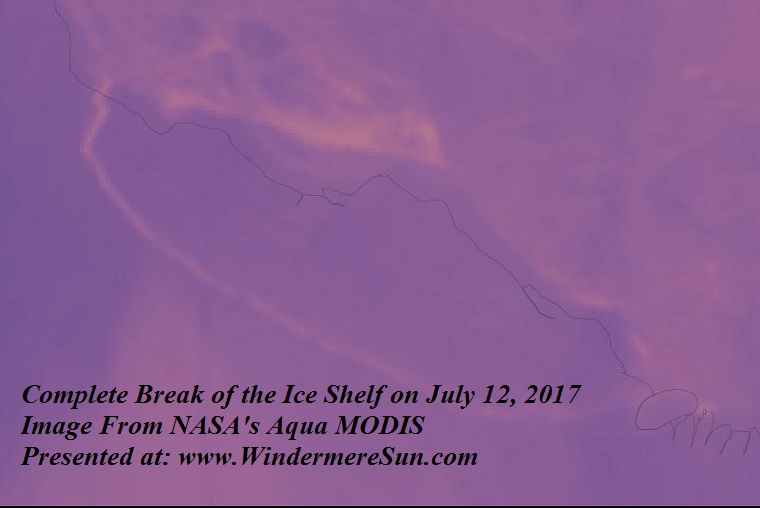 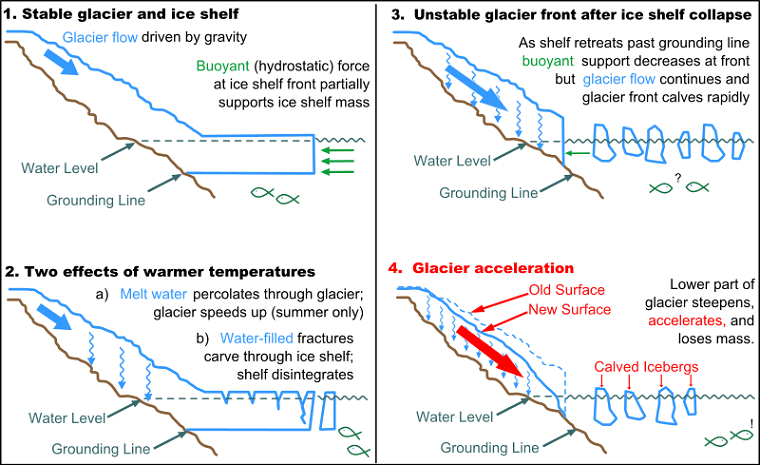 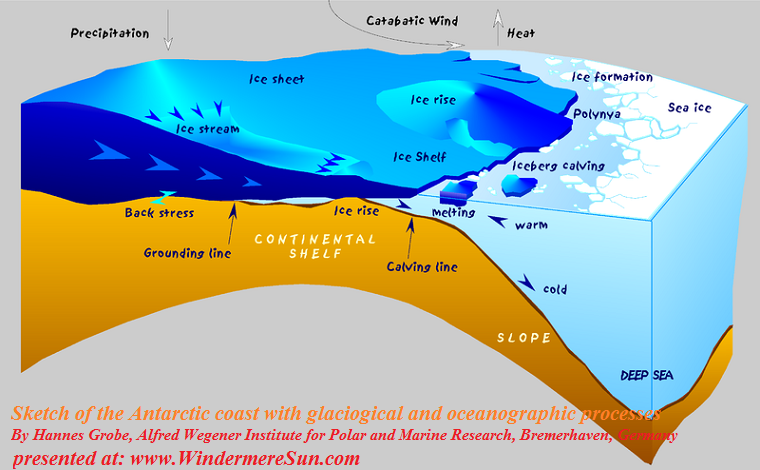 On July 12, 2017, a huge section (about the size of state of Delaware) of the Larsen C ice shelf, has broken away from the main shelf. Larsen C ice shelf is the fourth largest ice shelf in Antarctica, with an area of about 44,200 sq km (17,100 sq mi). The breakaway process had begun since mid-2016 and was completed some time between July 10-12, 2017. This huge piece of iceberg is estimated, by Project MIDAS (A. Luckman, Swansea University) to be about 5,800 sq km (2,200 sq mi), more than 200 m (700 ft) thick, and weighs more than a trillion tons. The final breakthrough was detected in data from NASA’s Aqua MODIS satellite instrument, which images in the thermal infrared at a resolution of 1 km (0.62 mi), and confirmed by NASA’s Suomi VIIRS instrument. If this calved iceberg does not break into pieces, it will be among the largest icebergs ever recorded.

Even though the iceberg is not expected to be an immediate danger to shipping,  it could pose a threat if it moves significantly northwards. Since the ice shelf is already floating, its departure from Antarctica will not affect global sea levels at the moment. But a number of glaciers discharge onto it from the lands behind the ice shelf, and may now flow faster due to the loss of support from the ice shelf. If all the ice that the Larsen C shelf currently is holding back were to enter the sea, it is estimated that global waters would rise by 10 cm (4 in).

The Larsen Ice Shelf,  is the long ice shelf in the northwest part of the Weddell Sea, extending along the east coast of the Antarctic Peninsula from Cape Longing to the area just southward of Hearst Island. It is named for Captain Carl Anton Larsen, the master of the Norwegian whaling vessel Jason, who sailed along the ice front as far as 68°10′ South during December 1893. In finer detail, the Larsen Ice Shelf is a series of shelves that occupy (or occupied) distinct embayments along the coast. From north to south, the segments are called Larsen A (the smallest), Larsen B, and Larsen C (the largest) by researchers who work in the area. Further south, Larsen D and the much smaller Larsen E, F and G are also named. (Source: wikipedia, in italics)

The breakup of the ice shelf since the mid-1990s has been widely reported, with the collapse of Larsen B in 2002 being particularly dramatic. 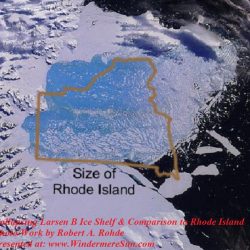 Image of the collapsing Larsen B Ice Shelf and a comparison of this to the U.S. state of Rhod Island (photo/work by Robert A. Rohde, presented at WindermereSun.com) 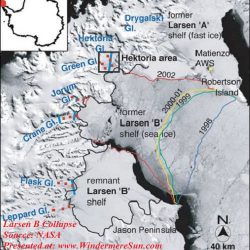 The Larsen disintegration events were unusual by past standards. Typically, ice shelves lose mass by iceberg calving and by melting at their upper and lower surfaces. The disintegration events were linked by The Independent newspaper in 2005 to ongoing climate warming in the Antarctic Peninsula, about 0.5 degrees C (0.9 degrees F) per decade since the late 1940s. According to a paper published in Journal of Climate in 2006, the peninsula at Faraday station warmed by 2.94 degrees C (5.3 degrees F) from 1951 to 2004, much faster than Antarctica as a whole and faster than the global trend; this localized warming is caused by anthropogenic global warming, through a strengthening of the winds circling the Antarctic. Once the disintegration of all three of Larsen A, B and C has completed, the enormous Larsen Ice Shelf viewed in 1893 by Carl Anton Larsen and his crew aboard the Jason would largely be gone – less than a century and a half after its discovery. (Source: wikipedia, in italics)


What should we do to help slow down this process? Let’s all try to transition into solar/renewable energy, EV, recycle, and consider sharing economy!
Gathered, written, and posted by Windermere Sun-Susan Sun Nunamaker
More about the community at www.WindermereSun.com